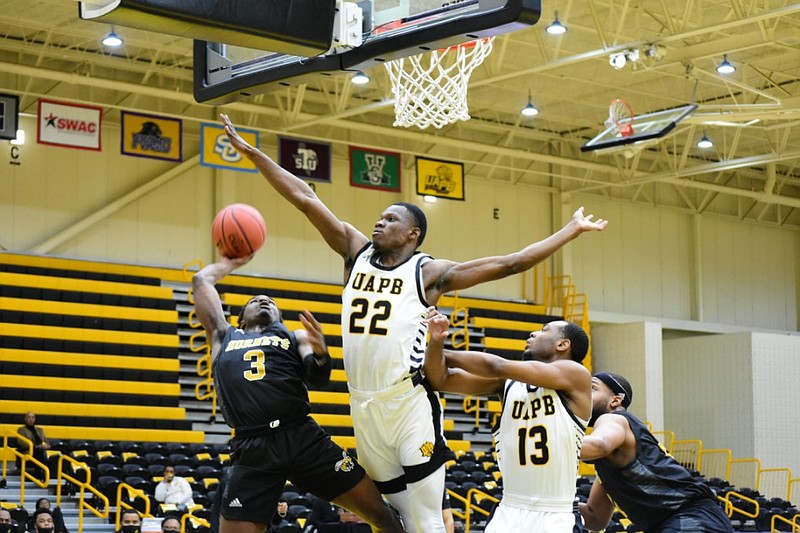 Shaun Doss needed just one game for the University of Arkansas-Pine Bluff last week to earn the Southwestern Athletic Conference player of the week honor in men’s basketball.

Doss made a strong case for a repeat in his only game this week. He scored 31 points, 10 rebounds and two steals Saturday, leading UAPB to a 91-82 victory over Alabama State at H.O. Clemmons Arena.

Yet he got his teammates’ attention in the locker room at halftime about the defensive effort. He notched his fourth straight double-figure rebounding game and third straight double-double effort.

“The type of team we are, we are more focused on defense,” Doss said. “The offense is going to come because we’re more of a running team, so I tried to get the guys focused more on defense so the offense could come later on.”

UAPB’s home game against Alabama A&M, which had been scheduled for this Monday, has been postponed due to a covid-19 case and quarantines within A&M’s program. Despite that, the Golden Lions (3-8, 2-0 SWAC) likely won’t prop their feet up and bask in the glow of their first winning streak this season.

“Monday’s going to feel like a game in practice, anyway,” Doss said. “We’re going to look at practice as a game.”

Said teammate Joshuwan Johnson, who scored 25 points and made 8 of 14 from the floor: “It’s definitely weird. It’s a good and bad thing for us. In a way, we got more rest, but I’d rather be playing.”

Doss had 15 points and Johnson 10 at the break.

“The team looks up to me to be a leader, and I felt like, the first half, we were kind of stagnant,” Doss said. “So, I needed to find some type of energy to bring towards us.”

From 3-point range, the Hornets connected on 8 of 15 (53.3 percent), with Jordan Cousin nailing three treys. Johnson nailed three 3s and went 6 for 6 at the foul line for the Lions.

Alabama State, which opted to not play a nonconference slate due to the pandemic, tied the game at 39-39, but Johnson’s second-half spurt, in which he connected on 6 of 9 field goals and 4 of 4 free throws, helped the Lions extend their lead to 73-63.

What was an 85-75 Lions lead quickly shrank to 86-81 with 1:08 remaining after the Hornets capitalized on late Lion miscues.

Dequan Morris scored 13 points, making 6 of 6 from the field, and Jalen Lynn added 10 points for the Lions. For the Hornets, Kenny Strawbridge had 18 points and 10 rebounds, LaTrell Tate 17 points and Brandon Battle 11 points.

First-year Alabama State head coach Mo Williams, best known for his 13-year NBA career (and 2016 championship with LeBron James and the Cleveland Cavaliers), has yet to lead the Hornets in a game this season due to covid-19 issues.

With the postponement of the Alabama A&M game, UAPB will visit Baton Rouge to take on Southern at 4:30 p.m. next Saturday, followed by a game at Alcorn State at 7:30 p.m. Jan. 18. UAPB’s next home game is Jan. 23 against Texas Southern.