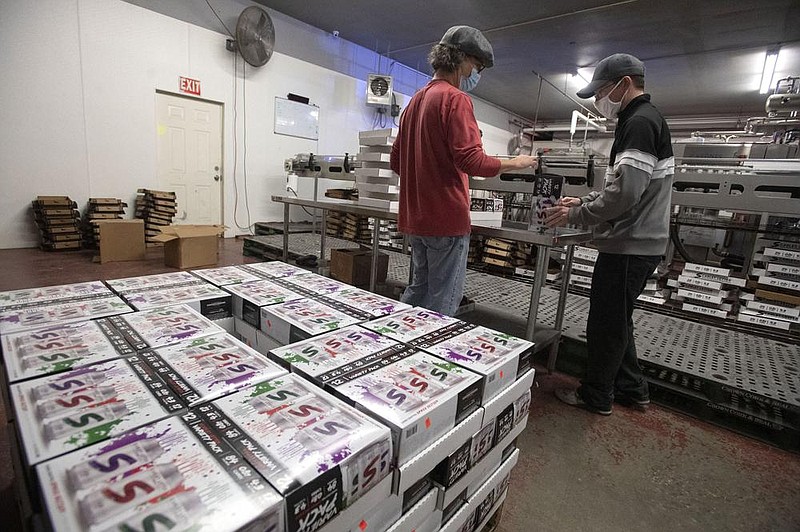 Core Brewing and Distilling Co. ran into an unexpected problem in the middle of a unprecedented business year brought on by the pandemic -- no new cans were available for some of the craft brewers selections.

So the company got creative, using cans it had on hand but relabeling them in-house to reflect their current contents.

Jesse Core, a founder of the Springdale brewer, said that's a prime example of just how 2020 shaped up for the company. He said the year required at times adaptation, focus and quick thinking.

"Craft brewers are creative," Core said. "We use what we can."

Craft brewers in Arkansas and around the nation saw their taproom sales crumble as the coronavirus pandemic struck. Restrictions on capacity in restaurants and bars hammered them further as keg sales dried up and access to and serving capacity at taprooms was cut off or severely restricted. Some also struggled with supply chain issues with vital raw materials, like Core's can challenge.

"Obviously, it sucks," Core said about dealing with the pandemic and its impact on business.

Still, he said, Core focused on what it could do in 2020, working hard to maintain its retail sale channels and dealing with emergencies as they arose.

"We focused on hitting singles and doubles," Jesse Core said of 2020. "We weren't looking for home runs."

In response to emailed questions, Sylvia Blain, executive director of the Arkansas Brewers Guild, said for Arkansas brewers, the first Paycheck Protection Program and loan packages in the Coronavirus Aid, Relief, and Economic Security Act were crucial for their survival during the early stages of the pandemic. She said while some details are still sketchy, breweries are planning to use the recently approved second round of federal relief and noted there is grant money available for breweries through the Arkansas Department of Economic Development.

She said overall, brewery owners are showing cautious optimism regarding 2021.

"The owners that I have been in touch with are still working hard to manage this crisis while beginning to plan for a time when we can ease restrictions," Blain said. "It's going to be a long year and we are digging in to do the work to not only get through it, but come out strong. We will be ready for the light at the end of the tunnel, but we just don't see it yet."

A mid-December report by Bart Watson, chief economist for the Brewer's Association, predicts national sales numbers to decline 7% to 8% for 2020. He noted the year was hardest on smaller brewers, since they typically lean heavily on keg and at-the-brewery sales. He predicted a sales drop close to 30% for the fourth quarter of 2020 in that segment alone.

Watson noted that 20% of consumers who buy and drink beer on site are waiting for a vaccine or treatment before they return in-person, so any significant recovery won't come about until the second quarter of 2021 at the earliest.

Arkansas is currently in phase 1-A of its vaccination protocol, targeting health care workers, long-term care residents and staff, and emergency medical services, fire, police and first responders, according to the state Department of Health. As of Tuesday, the state has administered 28% of the 134,425 doses of vaccine its obtained. Phase 1-B is expected to begin in February and Phase 1-C is to start in April. Phase 1-B and 1-C both also have restrictions on who is eligible for the vaccine and it's unclear when it will be available to the general public.

For 2021, national brewery sales models show growth of 6% to 7% over 2020 but production numbers are expected to remain far below 2019 and aren't expected to recover until 2022, according to Watson.

Blain said that as small-business owners, brewers know how to innovate and be agile but 2020 simply was brutal for everyone.

"Arkansas craft breweries have persevered in different ways," Blain said. "Many have poured time and money into outdoor seating areas. Some have focused on beer delivery, while others have added canning lines and developed new relationships for distribution. There isn't a magic bullet and everything is fair game."

In Arkansas, beer-makers brewed 16% more beer in 2019 than in the year before, according to information provided by the Alcoholic Beverage Control Division of the Arkansas Department of Finance and Administration. Arkansas brewers produced 40,818 barrels of suds in 2019, up from 35,193 barrels in 2018. A barrel of beer contains 31 gallons.

Lost Forty Brewery in Little Rock was once again the state's largest beer producer, making 14,238 barrels, nearly 35% of the state's total. Ozark Beer Co. in Rogers was the state's second-largest producer in 2019 with 5,003 barrels, followed by third-place Bike Rack Brewing of Bentonville with total production of 3,783 barrels, Core with 3,468 barrels in fourth place and Flyway Brewing Co. of North Little Rock with 2,362 barrels.

In 2020, brewers across the United States faced the greatest supply change challenges since the hops shortage of 2008, according to Watson. That included shortages, from aluminum cans to carbon-dioxide and items never considered important before the pandemic, like personal protection gear. Going into 2021, planning will be vital.

"The primary challenge is going to be aluminum cans. Right now, we're simply demanding more as a country than manufacturers can make," Watson wrote.

Nationally, new brewery openings for 2020 are on pace to be in the vicinity of 700, about 30% lower than in 2019 and are likely to decline in 2021, not simply because of the pandemic caution but because of a longer term slowing trend. Watson said the closing numbers are perplexing, since they're expected to be similar or even lower than the about 300 closings in 2019, even though sales have declined sharply. He predicted closings in 2021 will more closely mirror the economic reality of the pandemic.

"We should not confuse the lack of business deaths with business health, and there are numerous signs, from brewery sales and revenue, to broader small business confidence surveys, that small business, particularly those in hospitality, are hurting," Watson wrote. "As market conditions return to normal, this may accelerate closings, both as breweries take stock of the hole covid-19 has dug in their finances, and as other players, such as landlords, end extensions or forgiveness on rent."

The state lost two breweries in 2020, one in Fayetteville and one in Little Rock, but added new operations in Eureka Springs, Benton, Scranton and Malvern. Blain of the Arkansas Brewers' Guild said several more breweries are expected to open in 2021 in northeast Arkansas, south Arkansas, and Central Arkansas.

"Arkansas craft beer has a bright future," she said.

Jesse Core said Core Brewing and Distilling is currently distributing its products in Arkansas, Missouri, Iowa, Kansas, Oklahoma and most recently in Colorado. Over the year, Core Brewing introduced a seltzer product called Scarlet Letter that's been well received and plans are in the works to release a canned cocktail drink in the near future. Core Brewing is also working to revive its channels with bars and restaurants by offering its kegs at aggressive price points.

"We have a good team, with good partnership and a great bank," Core said. "That's not to say, at all, we had an easy year."