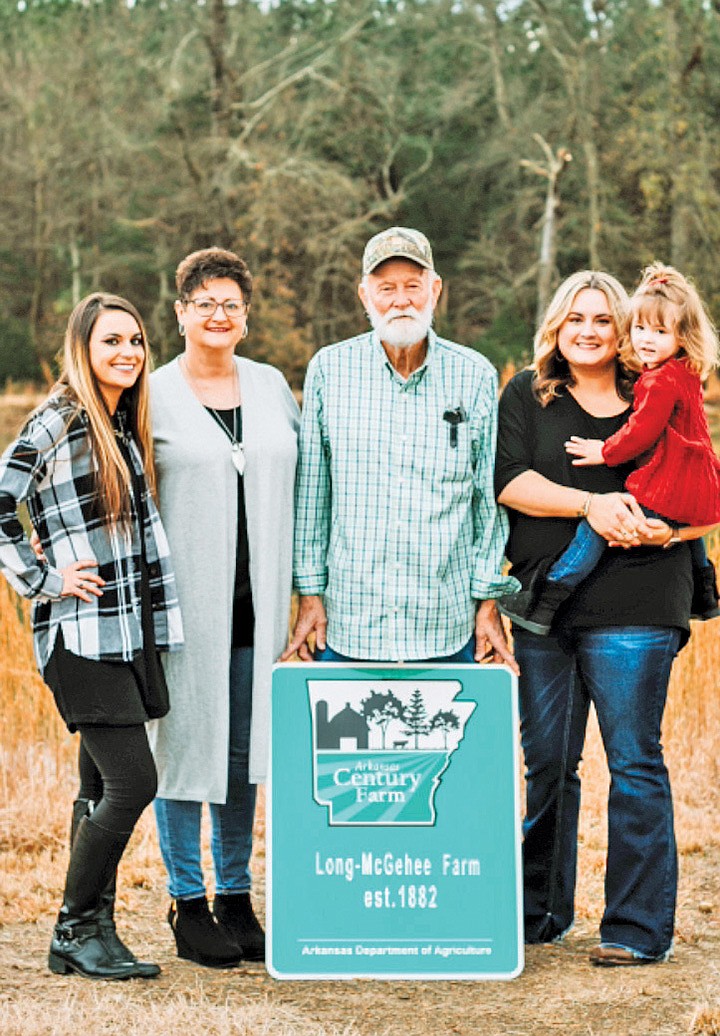 The Long-McGehee farm is one of 30 farms recognized in the 2020 Arkansas Century Farm program. Windle Long, center, is shown with, from left, his granddaughter Shelby McGehee; his daughter, Susan Long McGehee; and his granddaughter Jessica Mashburn, holding his great-granddaughter, Linleigh Mashburn.

The Long-McGehee farm is one of 30 farms from 23 counties in Arkansas that received recognition in the 2020 Arkansas Century Farm Program, administered by the Arkansas Department of Agriculture. The program, established in 2012, recognizes Arkansas farms of 10 acres or more owned by the same family for at least 100 years.

“My dad started the collection of deeds years ago [to show ownership of the farm],” said Susan Long McGehee, a daughter of Windle Long. “When [my husband, Kelly McGehee, and I] purchased the last part of the farm [in 2002], he gave the deeds to me. From there, [my father and I] have both worked on the information.

“It is a great honor to receive this recognition. It means a lot to me that this land has been handed down in our family for so many years. My dad turned 80 this year, and it was special for him to be a part of the process.”

Today, Kelly and Susan McGehee own 123 acres, 118 of which were the farm’s original acres. Two acres of the original farm make up the Hamilton Cemetery on Arkansas 324. Rose Creek lies between Petit Jean Mountain and Arkansas 10.

“The original 120 acres, I believe, was a land grant issued to William Allsbrooks in 1860,” Susan said. “My dad said [Allsbrooks] was not kin to us, and we haven’t found any information about him.

The land finally came to Susan’s dad and his ex-wife, Lavern Long, who bought part of the land in 1959 and part in 1967.

“My sister moved to Conway County in 2002 and is not involved with the farm,” Susan said.

“My husband and I still live on the farm. Kelly is a safety consultant on gas lines. His job requires him to travel, and at this time, his jobs are in Southern California. Those jobs should be completed in the upcoming year. I worked outside of the home until 2014, when we made the decision to split my time between here and traveling with him,” she said.

“Managing the farm is a joint effort. All ideas and plans are discussed with Kelly, me and our children. Decisions are made after consideration of those plans or suggestions, but the final decisions lie with Kelly and me,” Susan said.

“In 2012, we decided to transition from livestock to a small pecan orchard. We have raised cattle, swine, sheep, poultry and rabbits. A portion of the farm is hardwoods and forest, and another portion is pasture. Then we have the pecan orchard and a portion in pine trees. In 2021, we plan to add pumpkins and blueberries, as well as vegetables. Our goal is to participate in local farmers markets,” she said.

“I was raised on the farm, as was my dad and his mom. Our children were raised here, and now we have a granddaughter being raised here. Our daughter Jessica and her husband, CJ Mashburn, purchased the house I was raised in,” Susan said, adding that the Mashburns are parents of a daughter, Linleigh. “It is not part of the original farm, but it does join the property.

“Our daughter Shelby also makes her home on the farm.”

Susan and Kelly McGehee were not able to attend the Arkansas Century Farm recognition ceremony Dec. 11 at the Embassy Suites by Hilton Little Rock.

“We were still in California,” she said, laughing. “But the rest of our family was there and accepted the award from Gov. Asa Hutchinson and Secretary of Agriculture Wes Ward.”

Hutchinson told those gathered at the recognition event that agriculture is Arkansas’ largest industry, contributing more than $21 billion to the state’s economy and providing more than 290,000 jobs in the state, or one of every six.

“Year after year, decade after decade and in the face of many challenges, Century Farm families go out and put everything on the line to earn a living and produce our food, our fabrics, our timber,” Hutchinson said. “Farm families are great for our economy, and they are also part of the fabric of our state. They imbue our state with the same common sense and solid values that are the bedrock of their family farms.

“For the good of Arkansas, I hope their children and grandchildren choose to continue the family farm and that, someday, Arkansas will create a Two-Century Farm Family program.”