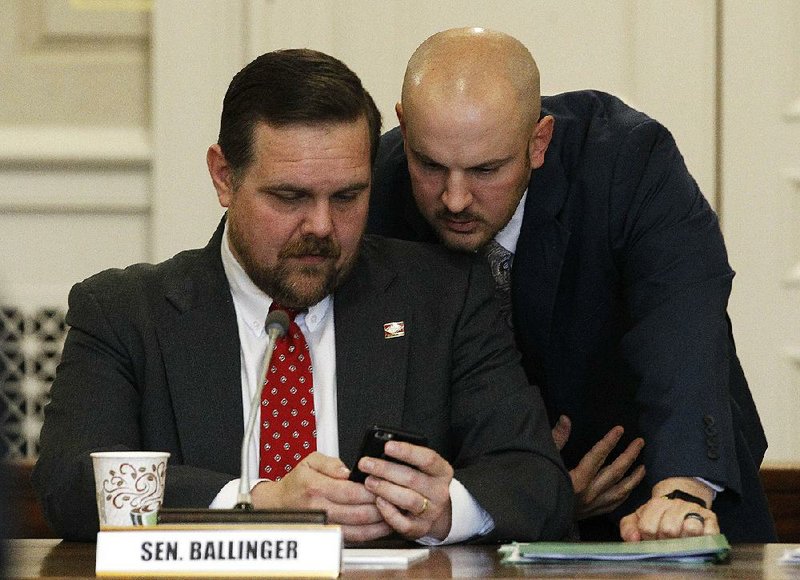 Sen. Bob Ballinger (left) and colleague Trent Garner confer Wednesday during the Senate State Agencies and Governmental Affairs Committee meeting in which members discussed the proposals on the state’s initiative and referendum process and on term limits.

Its author confidently predicts the Legislature will pass a revised version of his "stand your ground" bill this year.

Opponents of the bill by Sen. Bob Ballinger, R-Berryville, hope he is wrong, but aren't confident he is. The 2021 regular legislative session begins Monday.

Senate Bill 24 of 2021 would eliminate language from the state's criminal code requiring a person to retreat, if possible, before using deadly force in self-defense. Rep. Aaron Pilkington, R-Clarksville, is House sponsor.

The bill is a revised version of Ballinger's Senate Bill 484 of 2019. The earlier bill failed to get out of the Senate's Judiciary Committee by a single vote.

A determined speech by Sen. Stephanie Flowers, D-Pine Bluff, during committee debate became a YouTube sensation with at least 400,000 views. USA Today and Washington Post carried news accounts of the speech with links to the Senate's video.

Flowers is returning to Senate Judiciary -- but Sen. John Cooper, R-Jonesboro, is not. Cooper's was the decisive crossover vote in what was otherwise a straight, party-line 3 to 4 tally against the bill. Cooper lost his next Republican primary in 2020.

The Senate Judiciary Committee will have a more conservative membership. Four Senate co-sponsors of the bill are incoming members of eight-member committee, Ballinger included.

The 2019 bill encountered opposition from gun-control groups, law enforcement officials and prosecutors. The Arkansas Prosecuting Attorney's Association is neutral so far this year, according to Benton County Prosecuting Attorney Nathan Smith. Smith is the incoming president of the association.

Concerns of law enforcement groups like the Arkansas Sheriff's Association were addressed in the revised bill, Ballinger said. For instance, the protection wouldn't apply to a felon in illegal possession of a firearm unless he was being attacked in his home or other buildings on the same lot.

"The bill is really just codified policy," putting into law what prosecuting attorneys already practice, Ballinger said. "Not putting what's practiced into law means that a prosecutor could use his discretion in a nefarious way."

Opponents such as Rep. Denise Garner, D-Fayetteville, oppose the law because authorities apply the protection it offers to white men more than to other groups including Blacks, women and religious minorities, she said. This was the core of Flowers' objection in 2019.

Ballinger contends that making the law more explicit, curtailing the discretion of authorities on how to apply it, will protect the minority groups.

Ballinger noted 36 states have such a law or something similar. Those states include California, which he said is known for its progressive politics.

He and Garner disputed statistics on gun deaths in states with such laws, citing rival studies.

Gov. Asa Hutchinson said Friday he has read the bill and has some concerns, but took no stance on it.

House Minority Leader Tippi McCullough, D-Little Rock, said earlier this year she believes most Democrats in the state Legislature will remain opposed to the law. However, they can't block the legislation without getting some Republicans to join them.

Nine Democrats remain in the 35-member Senate. The House will see 22 Democrats seated, far below the 34 votes they would need to block an attempt to bring a bill out of the House Judiciary Committee.

States with “stand your ground laws: