Open-carry of guns in Michigan Capitol prohibited by panel 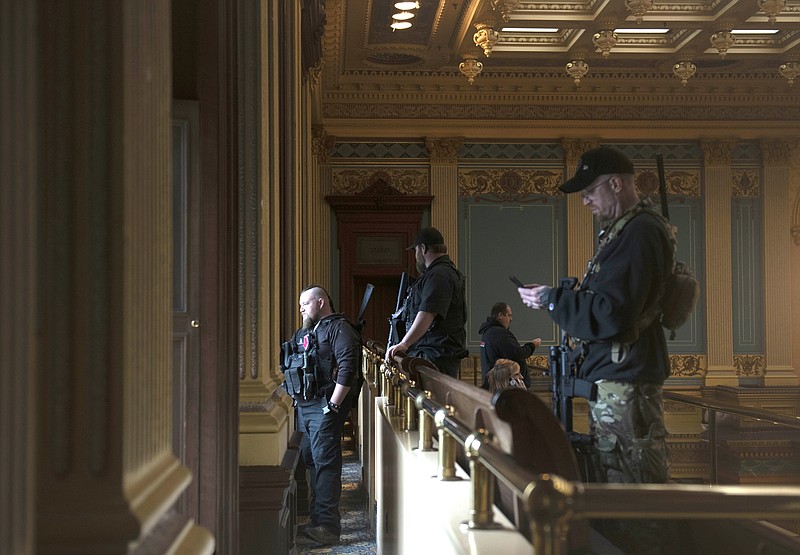 FILE - In this April 30, 2020, file photo, armed members of a militia group watch the protest outside while waiting for the Michigan Senate to vote at the Capitol in Lansing, Mich. Michigan has banned the open carry of guns in the state Capitol a week after an armed mob rioted in the U.S. Capitol and following an attempt to storm the statehouse last year. (Nicole Hester/MLive.com/Ann Arbor News via AP File)

LANSING, Mich. -- A state panel Monday banned the open carrying of guns in Michigan's Capitol, a week after an armed mob rioted in the U.S. Capitol and following a plot last year to storm the statehouse.

Moves to ban weapons at the statehouse have been pushed since April, when protesters opposed to Gov. Gretchen Whitmer's covid-19 restrictions, some armed with long rifles and other weapons, entered the Michigan Capitol demanding to be allowed onto the floor of a legislative chamber that was closed to the public.

The Michigan State Capitol Commission, which is responsible for overseeing the Capitol, had been reluctant to issue rules for firearms, but it shifted course Monday and issued the order to ban the open carrying of weapons.

A spokesman for Senate Majority Leader Mike Shirkey, who previously said the commission shouldn't be responsible for creating weapons policies, said last week that he would support an open-carry ban after violence erupted at the U.S. Capitol by a mob of President Donald Trump's supporters.

A spokeswoman for incoming House Speaker Jason Wentworth said he wants everyone to abide by the rule, even though he doesn't believe the commission had the right to issue it.

"The speaker is grateful for the work of the Capitol Commission, but it does not have the authority to set policy in the Capitol," Lynn Afendoulis said in a news release. "The speaker will be looking at options for handling that moving forward. In the meantime, the Michigan State Police will be enforcing the new ruling."

[Video not showing up above? Click here to watch » https://www.youtube.com/watch?v=VIlGFHSfpa8]

Commission Vice Chair John Truscott said the commission doesn't write policy but is ready to address general security issues. He said state government will have to fund it.

"We don't have a budget for security measures, so in reality, the governor and Legislature would have to deal with it," Truscott said. "We've gone as far as we can go with the budget constraints we have."

Some of the anti-government extremists accused in a plot to kidnap Whitmer carried guns at lockdown protests at the Capitol last spring. Prosecutors say the accused ringleader initially talked of recruiting 200 men to storm the building, take hostages and "execute tyrants." A secondary plan involved locking exits and setting the statehouse on fire, according to court documents.

The FBI has warned of plans for armed protests at all state capitals and in Washington, D.C., in the days leading up to President-elect Joe Biden's inauguration.

Michigan State Police will increase its visible and unseen presence at the Capitol for the next couple weeks, spokeswoman Shanon Banner said in an email Monday.

The Michigan Democratic Party issued a statement saying that though it applauds the commission that "finally put their authority to use," it is not enough, and that all firearms should be banned in the Capitol.

​​​​​Information for this article was contributed by David Eggert of The Associated Press. Nichols is a corps member of the AP/Report for America Statehouse News Initiative, a nonprofit national service program that places journalists in local newsrooms to report on undercovered issues.