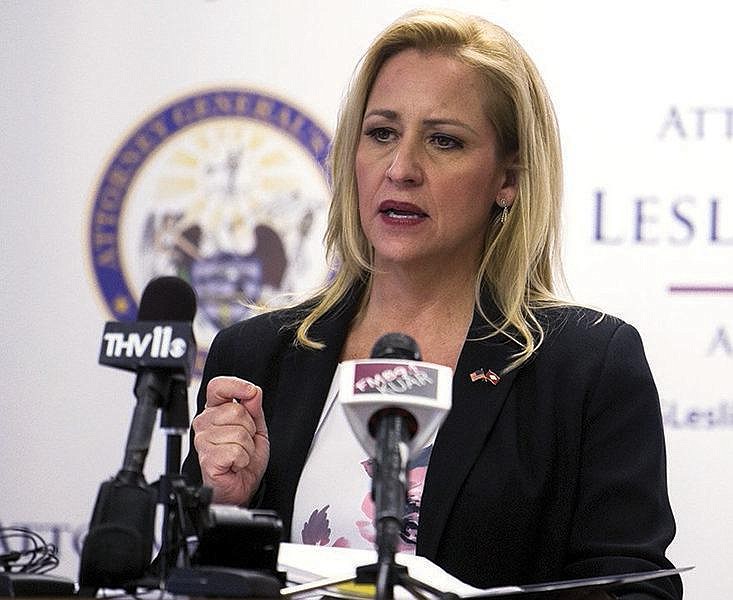 Attorney General Leslie Rutledge regularly uses her office to promote her own political agenda over the interests of the people of Arkansas, illegally using tax money that she must be forced to repay, according to a lawsuit filed Friday.

The suit, filed by eight Arkansas residents, accuses Rutledge of exceeding her statutory authority, which restricts her office to involvement only in litigation in which the state is a direct party or where the laws, regulations or policies of the state are involved.

"Rutledge has ... engaged in highly partisan political activities as Attorney General of the State of Arkansas in order to further her political standing and to promote her own personal political ambitions at the expense of the taxpayers of Arkansas," the suit states.

During Rutledge's five-year tenure, she has pursued "political and highly-partisan subjects" and then touted her efforts in fundraising to pay for her run for governor, according to the 11-page suit.

A representative of the attorney general's office denounced the lawsuit Friday afternoon as a political stunt and said Rutledge has always acted within her authority and on behalf of the people of Arkansas.

"The attorney general vehemently denies the partisan allegations of this politically-motivated complaint," spokeswoman Stephanie Sharp said. "The attorney general has broad discretion to act in the interest of the people of Arkansas. This is a frivolous lawsuit, and we will ask that it be dismissed."

Rutledge, 44, is the first Republican and first woman elected to the office. Her anniversary of taking office was Wednesday. Midway through her second term, she is now running for governor.

The suit asks Pulaski County Circuit Judge Alice Gray to order Rutledge to stop exceeding her authority and deem the money that Rutledge has spent to be an illegal exaction of tax dollars that Rutledge must personally pay back.

The lawsuit alleges eight transgressions by Rutledge, among them her participation, with 10 other Republican attorneys general, in a Supreme Court lawsuit that unsuccessfully called on the high court to challenge the outcome of the president's race in Pennsylvania.

Also cited is her support with 18 other Republican attorneys general of an effort, ultimately unsuccessful, to get the U.S. Supreme Court to block the Electoral College votes of Georgia, Michigan, Pennsylvania and Wisconsin.

Also illegal is the way Rutledge has supported litigation in other states challenging a variety of federal regulations while "advocating the elimination of or reduction in environmental, health and safety, and financial protections of the citizens of Arkansas," the suit states.

The suit was filed by Richard Mays, an environmental lawyer and civil rights advocate who is also representing Little Rock residents challenging the legality of the funding for the Interstate 30 expansion.

Dumas is the wife of longtime journalist, teacher and author Ernie Dumas, the Arkansas Times reported. Remmel is the namesake son of Little Rock's first Republican mayor since Reconstruction. The senior Remmel, who died in 1991, was also the party's nominee for governor in 1954 but lost to Orval Faubus.

Stewart, a farmer and conservationist, is also a civil rights attorney who has represented parents who challenged the state takeover of the Little Rock School District and championed desegregation causes. She is the widow of Walter Nunn, a Little Rock book publisher, college professor and community civil-rights activist who died in 2017 at age 75.