Apaches object as mine advances 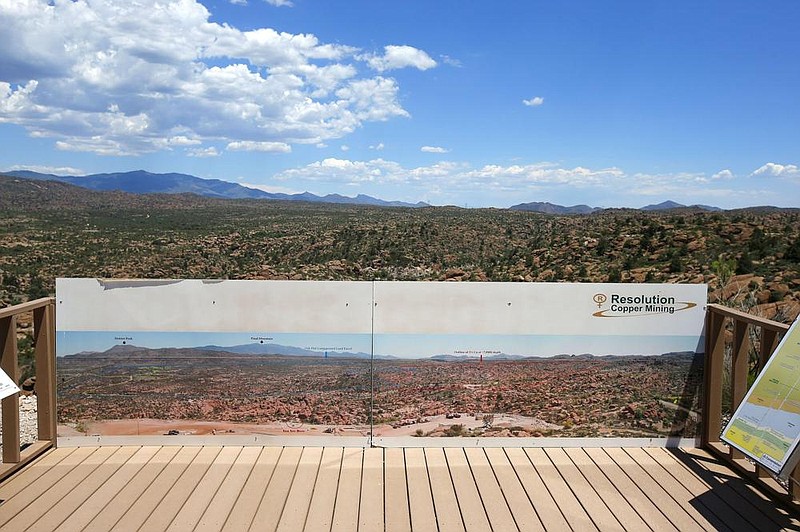 A section of the Resolution Copper Mining land-swap project in Superior, Ariz., is pictured in 2015. (AP)

FLAGSTAFF, Ariz. -- The U.S. Forest Service released an environmental review Friday that paves the way for the creation of one of the largest copper mines in the United States, against the wishes of a group of Apaches who have been trying for years to stop the project.

The Forest Service now has 60 days to turn over a tract of land in the Tonto National Forest east of Phoenix to Resolution Copper Mining, a joint venture of the international mining companies Rio Tinto and BHP.

Environmentalists contend the Forest Service was pressured to push the review over the finish line before President Donald Trump leaves office, complicating their efforts to reverse the land swap.

The Forest Service said that's not true, while the mining company contends the publication already was delayed by months.

The mountainous land near Superior, Ariz., is known as Oak Flat or Chi'chil Bildagoteel. It's a place where Apaches have harvested medicinal plants, held coming-of-age ceremonies and gathered acorns for generations. It's also an area where dozens of warriors leapt to their deaths from a ridge adjacent to the proposed copper mine rather than surrender to U.S. forces during westward expansion and has been protected as a special management area.

A judge late Thursday denied a request from Apache Stronghold, a group led by former San Carlos Apache Chairman Wendsler Nosie Sr., to halt the publication until a larger question over who legally owns the land is settled.

U.S. District Court Judge Steven Logan in Phoenix said he recognized "the anxiety that having one's sacred land taken from them and used for purposes that run counter to their spiritual beliefs, might cause."

But Logan said the Forest Service and other defendants also have a right to respond to the allegations, and he saw no proof they had been served. He set a Jan. 27 hearing.

Randy Serraglio with the Center for Biological Diversity called the judge's decision "a callous betrayal of Native people who value that land as sacred."

In the federal lawsuit filed this week, Nosie's group alleges violations of religious freedom and constitutional rights. It also contends the Forest Service legally can't transfer the land because it belongs to Apaches under an 1852 treaty.

Nosie said he's hopeful the court or politicians will take action to preserve the area as it is.

"I think with a new Congress, new administration, they will be able to take a new look at it based on the Constitution, our religion and based on the consequences of having this mine that's looking to devastate and destroy this area forever," Nosie told The Associated Press.

The land swap was approved in December 2014 as part of a must-pass defense bill. The late Republican U.S. Sen. John McCain, a major recipient of Rio Tinto campaign contributions, backed it. Before that, stand-alone bills never gained congressional approval.

Arizona Gov. Doug Ducey on Friday said the mine will ensure a reliable supply of up to 1 billion pounds of copper annually. "Arizona has a long history of responsible mining, showing that we can have a robust mining sector while protecting our environment and cultural history," he said in a statement.

Rio Tinto said in a statement that it will continue to engage with American Indian tribes and seek consent before any decision on the development of the project.

The project manager of Resolution Copper wrote to 11 tribes last month, saying the company welcomed the opportunity to increase direct engagement with the groups, while emphasizing that the development remains in the early stages.

Resolution Copper said it has spent about $2 billion so far to gain access to the mine and conduct studies. More time and money will go into securing permits and constructing the mine, which wouldn't begin operating for at least 15 years.

Resolution Copper has said the mine could have a $61 billion economic impact over the project's 60 years and create 1,500 jobs -- points that supporters repeatedly have stressed.

Environmentalists and American Indians are concerned about the toxic waste that would be dumped on nearby wildlands, the potential for groundwater contamination and the destruction of sacred sites.

Information for this article was contributed by Anita Snow of the Associated Press and by Joe Deaux of Bloomberg News (TNS). 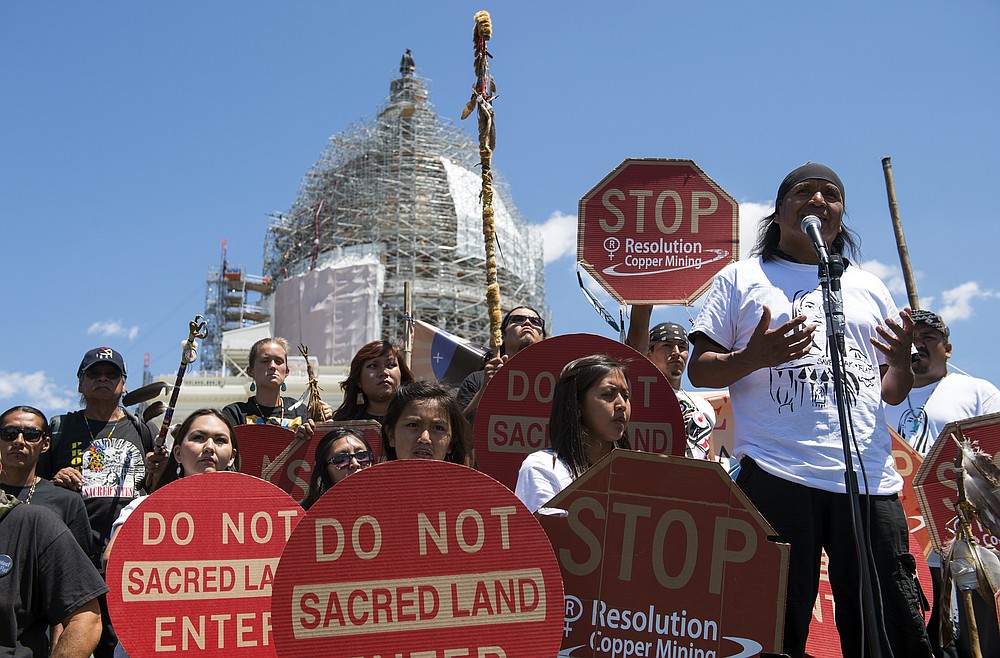 FILE - In this July 22, 2015, file photo, Tribal councilman Wendsler Nosie, Sr. speaks with Apache activists in a rally to save Oak Flat, land near Superior, Ariz., sacred to Western Apache tribes, in front of the U.S. Capitol in Washington. A group of Apaches who have tried for years to reverse a land swap in Arizona that will make way for one of the largest and deepest copper mines in the U.S. sued the federal government Tuesday, Jan. 12, 2021. Apache Stronghold argues in the lawsuit filed in U.S. District Court in Arizona that the U.S. Forest Service cannot legally transfer land to international mining company Rio Tinto in exchange for eight parcels the company owns around Arizona. (AP Photo/Molly Riley, File)
ADVERTISEMENT