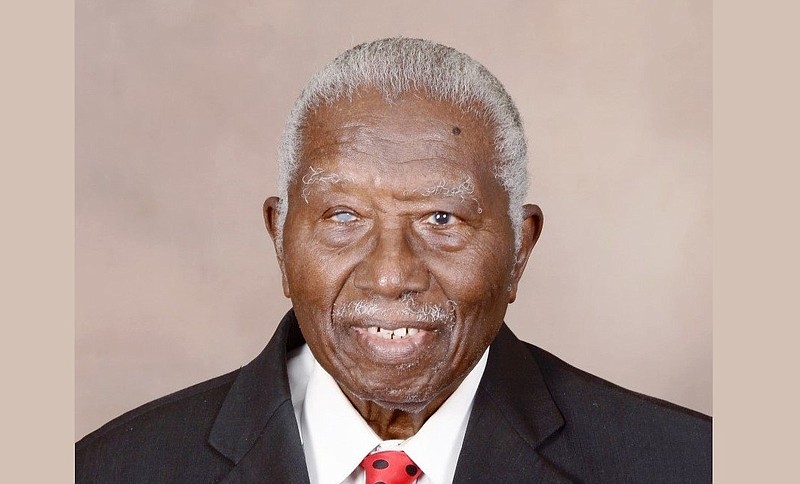 A Jefferson County native, McConico "Mac" Thomas, of Fort Worth, will celebrate his 100th birthday on Sunday.

The World War II veteran who preached his first sermon in his 90s says he hopes to preach once more and is writing a book, according to a news release from Mt. Olive Missionary Baptist Church at Fort Worth.

"By the grace of God, Mac overcame typhoid fever and malaria at the age of 6," according to the church where he is a member. "

He was baptized by Rev. I.C. Brooks, assisted by Sister Martha Cole, in a creek behind his house at the age of 11. It was by this creek that Mac chose a special place where he could commune with God in prayer."

Thomas attended Rosenwald High School at Humphrey and after graduation, he moved to St. Louis.

He enlisted in the military in April 1941 and completed basic training at Fort Leonard Wood, Mo., where he was trained as a combat engineer. After basic training, he began his five-year tour of duty.

"His military service provided him the opportunity to travel the world. He served in Scotland, England, Africa, Germany and Italy. One of the highlights of his military career was meeting Gen. B.O. Davis, the first African-American general in the U.S. Army," according to the release.

After leaving the military, he attended Lincoln University, a historically Black university in Jefferson City, Mo., where he joined Alpha Phi Alpha Fraternity Inc. and earned a bachelor of arts degree in agriculture.

Upon graduation, he moved to Oakland, Calif., and worked at the naval shipyard for 12 years then was hired by Golden State Life Insurance, a predominantly Black company, where he became a successful district manager, according to the release.

At Oakland, he met the love of his life Tommie. They were married and had two sons, Thaddeus and Theodore. Their sons moved to Fort Worth and the couple also moved there in 1988.

"Bro. and Sis. Thomas joined Mount Olive Missionary Baptist Church where they were very active in many areas of the church. They facilitated marriage workshops. Couples were invited into their home and were provided meals and marital counseling. Bro. and Sis. Thomas led the scholarship committee to support high school graduates in their quest to attend college. Because of their commitment and dedication to education, this annual scholarship is named in their honor. Bro. and Sis. Thomas were inseparable, where you saw one, you saw both. This was always the case until they were separated by her death," according to the release.

Thomas has been a deacon and teacher at Mount Olive church. He served as devotion leader in the Fort Worth Citywide Brotherhood, North Texas District Association and National Baptist Convention of America.

At 95, Thomas answered the call to the ministry. Thomas has preached two sermons, hopes to preach at least one more and plans to write a book.