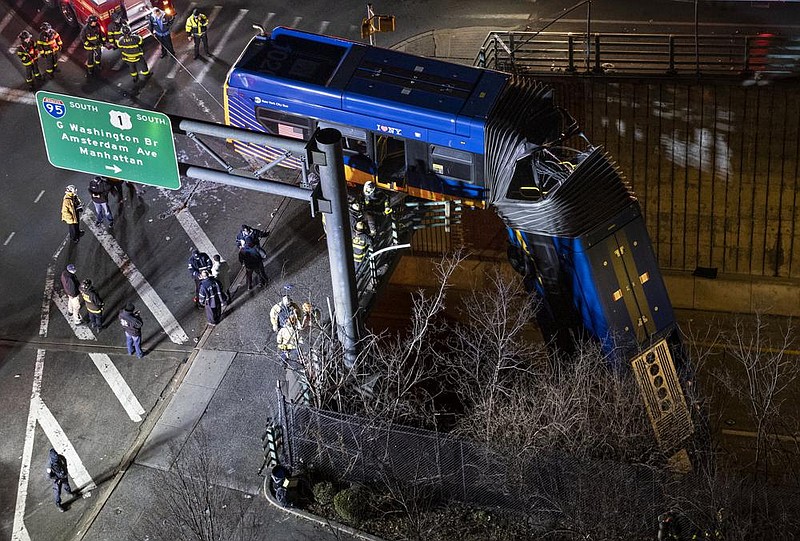 This bus careened off a road in the Bronx neighborhood of New York City, leaving part of it dangling from an overpass early Friday. More photos at arkansasonline.com/116bronxbus/. (AP/Craig Ruttle)

NEW YORK -- A bus plunged off a bridge in New York City late Thursday, leaving its front half hanging over a highway ramp.

The 55-year-old driver, who broke his jaw in the crash, refused to submit to a drug and alcohol test after arriving at the hospital, authorities said Friday.

One part of the articulated bus -- essentially two buses connected by a pivot that allows it to navigate turns -- remained on the bridge, with the other half vertical, its smashed front end resting on a ramp connecting the two expressways.

Seven passengers suffered minor injuries in the crash, which happened after 11 p.m. near an interchange of the Cross Bronx and Major Deegan expressways. They were taken to hospitals. No other vehicles were involved.

The driver, whose name was not released, was driving his regular route. He has more than 11 years of service and a good safety record, the Metropolitan Transportation Authority said. The driver passed a breath test at the scene of the crash but then refused to submit to a later drug and alcohol test at the hospital, said Patrick Warren, the authority's chief safety and security officer.

Speed appeared to be a factor, the authority said, adding that the crash is under investigation.

No charges planned over 9 tossed ballots

HARRISBURG, Pa. -- No criminal charges will be filed against a former temporary elections worker who authorities have said mistakenly discarded nine military ballots ahead of the November presidential election, a federal prosecutor announced Friday.

Officials have previously blamed the decision to toss out the ballots on an unidentified and improperly trained contract worker who had been handling mail-in ballots for the county for two days. The ballots were later retrieved from the trash and were counted with other mailed ballots after the Nov. 3 election.

"After a thorough investigation conducted by the FBI and prosecutors from my office, we have determined that there is insufficient evidence to prove criminal intent on the part of the person who discarded the ballots," acting U.S. Attorney Bruce Brandler, a career prosecutor, said in a news release.

"Therefore, no criminal charges will be filed, and the matter is closed," he said.

President Donald Trump repeatedly brought up the nine ballots as he pressed groundless claims of election fraud, including two mentions during the first presidential debate.

Pennsylvania Secretary of State Kathy Boockvar, a Democrat whose office oversees voting in Pennsylvania, has previously described the discarded ballots as a "bad error" but not a matter of intentional fraud. The unidentified worker was fired.

BOSTON -- A manslaughter case against a former Boston College student accused of encouraging her boyfriend to take his own life will head toward trial, prosecutors said Friday.

A court this week partially denied the defense's motion to dismiss, finding that Inyoung You's words could have caused Alexander Urtula to kill himself, Suffolk County District Attorney Rachael Rollins' office said. The judge did dismiss one of the prosecution's theories, ruling that You's failure to summon help didn't cause his suicide, Rollins' office said.

Prosecutors say You sent Urtula of Cedar Grove, N.J., thousands of messages in the last two months of their relationship, including many urging him to "go kill yourself." Urtula died in Boston on May 20, the day of his Boston College graduation.

The case echoes that of Michelle Carter, who garnered headlines and was the focus of an HBO film. The young Massachusetts woman was sentenced to 15 months in prison after she was convicted in 2017 of involuntary manslaughter for using text messages and phone calls to encourage her boyfriend, Conrad Roy, to kill himself in 2014.

COLUMBIA, Mo. -- The Missouri House canceled work next week because of a rising number of coronavirus cases in the Capitol.

"Due to the rising number of covid-19 cases in the building, we are exercising an abundance of caution to protect members, staff, and visitors by canceling session next week," top Republican representatives said in a joint statement released late Thursday.

Lawmakers already were set to be off work Monday because of Martin Luther King Jr. Day, and the House speaker's office previously planned on either canceling or holding a limited session Wednesday over security concerns about potential Capitol protests related to Joe Biden's presidential inauguration.

House leaders didn't specify how many lawmakers and staff members are ill, but at least one lawmaker has tested positive and three others are quarantining. Eleven other lawmakers have confirmed that they tested positive for the coronavirus at some point last year.

A spokesman for Senate Republican leaders said that chamber still plans on working next week. House leaders plan to return to work the week of Jan. 25.