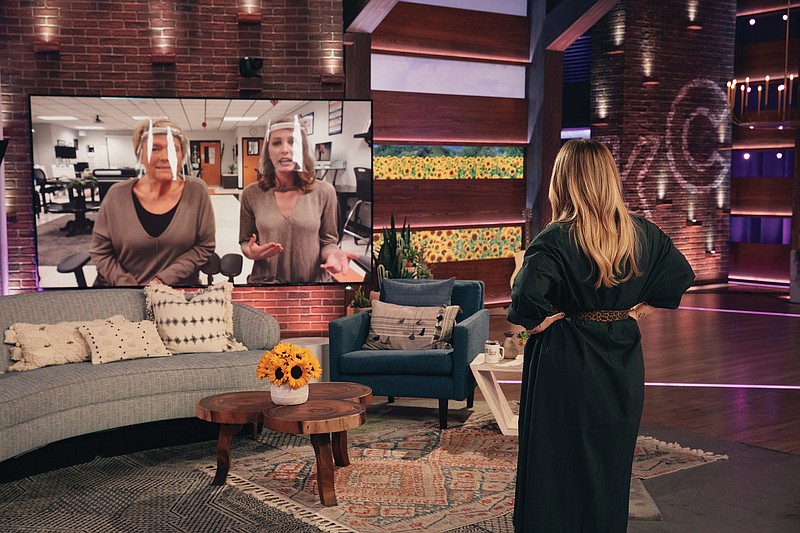 Jeanne Roepcke, left, the EAST Facilitator for Batesville High School, and Megan Renihan, the district’s communications coordinator, were featured on a Jan. 7 episode of “The Kelly Clarkson Show,” a daytime talkshow on NBC. Producers for the show caught wind of the energy-efficient reductions put in place in the school district, which allowed its administrators to raise the salaries of teachers in 2020.

BATESVILLE — An energy-saving project in the Batesville School District that started more than two years ago has traveled full circle and finally come to fruition.

In 2017, the district formed a strategic plan that included closing campuses, undergoing an energy audit and installing 1,600 solar-energy panels. The district also changed its water from high flow to low flow for all seven campuses and installed new insulation and double-paned windows. There are currently 1,483 solar panels at the high school, but all of the panels distribute energy to all of the campuses.

Megan Renihan, the district’s communications coordinator, said a lot of ground work and investment in other energy-saving improvements were complete before the solar panels were installed.

Thanks to these energy-efficient reductions, which have saved the school about $1.5 million in 2019, the district was able to raise the salaries of teachers in 2020 from between $2,000 and $9,000, depending on the longevity of the teacher’s employment.

Now the district has received national media attention following being featured on an episode of “The Kelly Clarkson Show,” a daytime talk show on NBC. Renihan and Jeanne Roepcke, the EAST Facilitator for the high school, were guests on the show, which aired Jan. 7. To watch the clip, visit www.youtube.com/watch?v=6mAK6fNluQM.

“It was a great opportunity to showcase the amount of work our board members and superintendent have done in the past few years,” Renihan said. “The producers were amazing to work with — they were so kind and energetic.

“What you saw on the show was all the time we got to spend with Kelly, but she was for it and on board with the idea.”

Renihan said that initially, to help cover the cost of minimum-wage increases, the district had requested money from the state. She said the school was told it would have to find that money from its own budget.

“We had to figure out what we could do internally that could benefit the district,” she said.

Renihan said the district went from having the fourth-highest teacher pay out of the five schools in the county to the highest.

“I applaud members of the Batesville School District Board of Directors for being visionaries who pioneered the state’s first and largest pre-K-12 solar and energy-efficient project,” said Michel Hester, superintendent for the district. “The revenue generated from these solar arrays and energy savings were applied to the district’s teacher salary schedule.

“Batesville has now moved from the lower quartile in the state’s salaries to the upper half. The BSD Board is currently pursuing more efficiency moves and partnerships to pursue its goal of being in Arkansas’ top quartile of teacher salaries.”

Roepcke, who has been with the district for 23 years and has worked at the high school for 10 years, said the show’s producers and Clarkson made them both feel so welcome and loved.

“The producers were so kind and so helpful,” Roepcke said. “I am so thankful to the district for stepping out and taking the plunge to find ways to increase salaries for teachers.

Renihan said one of the reasons Roepcke was chosen to represent the district on the show was that before the raise was put in place, Roepcke was working part time at the community center. Now, thanks to the raise, she has been able to cut back on her hours and spend more time with her family and focus more on her students.

“I am the kind of person who likes to stay busy,” Roepcke said, “so I’ll keep a little bit of the second job anyway, working on the weekends, but this raise this year has allowed me to cut back.”

Roepcke’s son, Talan, graduated from Batesville High School in 2010 and now works as an art teacher and assistant high school baseball coach for the district.

“He is in his fifth year, but knowing that the district is looking at the teachers coming up and wants them to have better pay — it means a lot to me,” Roepcke said. “We have a lot of hardworking teachers at the high school, and I appreciate all of them and the work they do.

“I appreciate the district wanting to step up and retain those teachers.”

“The Kelly Clarkson Show” also donated $1,000 to the school district, surprising Renihan and Roepcke on the air. Roepcke said she would like to see the school use the money to start a scholarship for seniors.

Renihan said she and Roepcke got on the show after one of the show’s producers had caught wind of the district’s projects, thanks to many publications and podcast interviews featuring Hester. The initial interview for the show took place Dec. 16. She said it was “such an awesome experience.”