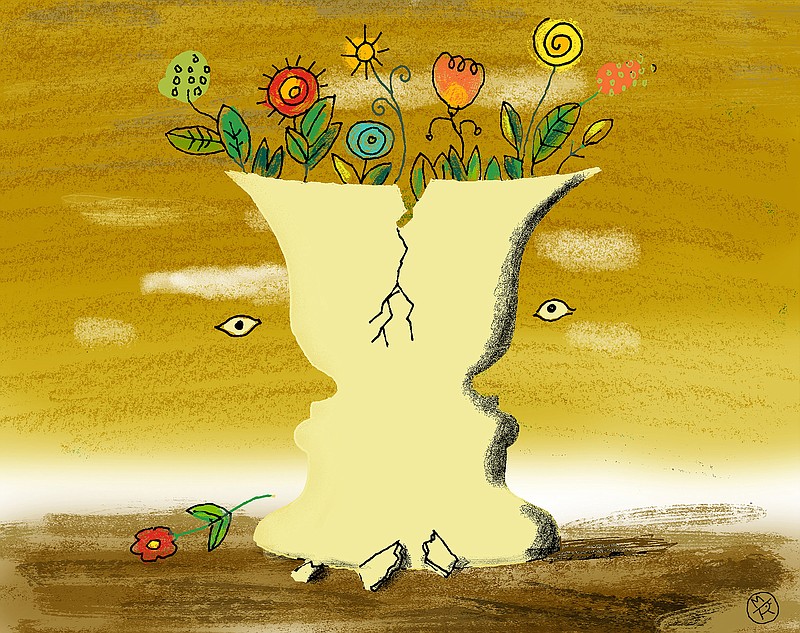 Months of limited mingling have made even extremely outgoing people uncomfortable socializing. (Marc Rosenthal/The New York Times) -- NO SALES; FOR EDITORIAL USE ONLY WITH NYT STORY SOCIALLY RUSTY BY BOB MORRIS FOR DEC. 20, 2020. ALL OTHER USE PROHIBITED. --

Cece Cord, a loquacious socialite and designer, hosted a small luncheon over the summer graced with flowers from the garden at her hillside cottage in Millbrook, N.Y. But when the guests arrived, her social game was a little off.

"You just feel so simple-minded," Cord, who described herself as being "of a certain age," said. "Sometimes you can barely carry on a conversation."

Marz Lovejoy, a hip-hop artist and the editor of The Black Utopia, a style and culture 'zine, was at a SoHo restaurant with a colleague and took forever to order. "We just couldn't get our thoughts and words together," Lovejoy, 29, said. "I guess we'd lost our ordering skills."

I faced something similar the other day when I bumped into Hamish Bowles, the Vogue editor-at-large, in Washington Square Park in Manhattan. Our exchange was pleasant enough until I realized after parting that I had not introduced him to the friend standing next to me, a breach I would not normally commit.

Thankfully my friend, typically prickly when slighted, was just back from isolating in his native Canada, and barely noticed my thoughtless gaffe.

Welcome to the pandemic province of the socially rusty and newly awkward, where simple interactions among even the most outgoing people have become unfamiliar and uncomfortable. Jumping back into pleasant interactions can feel like returning from a year in the wilderness, a silent meditation retreat or outer space.

"Even the most social people right now feel like awkward eighth-graders attending a school dance for the first time," said Samantha Boardman, a Manhattan psychiatrist who runs a website called Positive Prescription. She recently counseled a patient who destroyed a friendship by recoiling from a hug. "The challenge is that everyone's rules are different," she said.

Conversations that once came easily and gave pleasure can now feel forced and unnerving. Lizzie Tisch opened a holiday pop-up store, LTD, on Madison Avenue recently, but when shoppers asked about merchandise, including a mask gift set, she found it disconcerting.

"It was if I had to reteach myself basic social skills," Tisch, 48, said. "It took a couple of days to remember how to talk to people who were as anxious as I was about how to behave in a shop."

Indeed, the niceties of the simplest pedestrian civilities can overwhelm the more cautious among us. And when we aren't putting feet in mouths, we're putting others on the spot by asking them if they've been tested and to open their windows to let air in.

At a dinner in November at a friend's house on Long Island, when the virus was starting to resurge, I asked a fellow guest who was 6 feet away, but talking so percussively that I could almost see the aerosols spraying from his mouth, to lean back in his chair. I disliked myself for doing so -- it wasn't my home, so I had no right to make the rules. But to his credit, the guest just laughed and sat back in his chair, giving me the benefit of an extra foot or so. He even pulled up his mask for good measure.

It felt incredibly awkward, but at least our conversation was amusing. That's not a given anymore.

"We've lost the ability to talk about a lot of things, because we aren't doing a lot of things," said Fern Mallis, the fashion consultant known for turning New York Fashion Week into a major social event. She found herself a little tongue-tied at an outdoor Alvin Valley ready-to-wear show in Southampton in October, a rare outing and momentary return to the runway. "How much can you talk about Donald Trump and what you watched on Netflix?" Mallis, 72, said. "And now Trump's leaving."

HAVING A HARD TIME

Isaac Mizrahi, the witty fashion designer and cabaret performer, is having a hard time bantering with his mother. "She used to talk about fabulous things, including her shopping trips to Loehmann's," Mizrahi, 59, said. "Now she tells me about how her house plant grew a little."

Not long ago, he was taping one of his virtual cabaret shows to stream on Broadway World from Café Carlyle and found that his patter had lost its pizazz. "I talked about the egg-white omelet I had for lunch as if it were the Arab Spring," he said. "And I sounded like a 93-year-old myself."

Jeanne Martinet, the author of "Mingling With the Enemy" and other books on social interaction, partially attributes the lapse in felicitous talk to too much Zoom, where you can't practice the subtle and playful art of talking over and around one another. It does, after all, take a certain amount of skill to jump into a lively or heated conversation. And when you're behind a mask, that makes the nuances of humor and empathy hard to express, which may explain why some people use emojis when they send texts.

There could be biological reasons as well. Sam Von Reiche, a clinical psychologist in New Jersey and the author of "Rethink Your Shrink," believes that certain kinds of conversation can stimulate the brain to produce hormones including dopamine and serotonin to stimulate feelings of well-being. Social distancing and anxieties about being too close has caused them to go away right now, resulting in tentative and clumsy interactions.

"Body language is so important in verbal conversation," Von Reiche said. "When you're near someone and looking at a full face, it stimulates oxytocin, the hormone responsible for the feelings that come from affection and bonding and that can make conversation better."

Social atrophy has entered the professional realm, too. Deborah Hughes, who owns a public relations company that has represented Donna Karan and Carolina Herrera, found herself at a real-life pitch meeting last fall and did not recognize her voice. "I was breathing little shallow breaths," she said. "I just sounded so weird."

And when Alina Cho, a television correspondent, had to interview Leonard Lauder for CBS' "Sunday Morning" in October, it felt unfamiliar, at least sartorially. "I hadn't been in high heels in so long that my feet were in pain and making me self-conscious," Cho, 49, said. "And so was my form-fitting Gabriela Hearst dress."

Urban street life, and the pleasure of chance encounters, has perhaps suffered the most. "We've lost the basic niceties of pedestrian living," said Euan Rellie, the sociable investment banker who lives with Lucy Sykes Rellie in a West Village apartment.

The other day, a woman in Rellie's lobby pushed past him to get into the elevator, telling him she preferred riding it alone. At the local espresso shop, where it's not clear how many people are allowed inside at once, he had to elbow his way past a masked woman blocking the door. And dropping his younger son off at school is no longer "a joyful collegial vibe" that invites playful conversation, he said, but a bureaucratic line for temperature taking and filling out health surveys. It drains the wit and congeniality right out of him.

"We're all desperate for a chat and a hand on a shoulder right now," Rellie, 52, said. "And without that we're missing a sense of ourselves and the basic understanding of whether we've offended by either being too cautious or too casual."

What to do about this strange time that makes the awkwardness of holiday parties seem like a golden age of camaraderie?

Some people advise getting out of the sweats to remind yourself you once cared about appearances and convivial human interaction. Others suggest making an extra effort at active empathetic listening when conversing with a masked friend or stranger. Boardman, the psychiatrist, uses a calming namaste bow to graciously fend off hugs and handshakes. Others use humor to fill in awkward greetings and tricky social gaps.

'DO A LITTLE DANCE'

"I like to do a little dance with my elbows, hips and legs to let people know how hard it is not to hug and double kiss like we Brazilians do," said Jayma Cardoso, 43, the owner of the Surf Lodge in Aspen and Montauk, N.Y.

Personally, I could use a little Xanax. At one of the first dinners of friends on Long Island that I attended last summer, after months of lockdown, I found myself in an unnecessary and brutal argument about current events.

I've always been good at navigating tricky conversations, even turning them into positive exchanges. But this one escalated and then I became so nuclear that I was yelling unprintable things that should have gotten me either canceled or excommunicated.

Later I wondered why nobody stepped in to intervene and de-escalate the situation. Instead, they just watched the blood and feathers fly. Maybe they were socially rusty, too? Or perhaps they were just hungry for some entertainment that wasn't on Netflix.