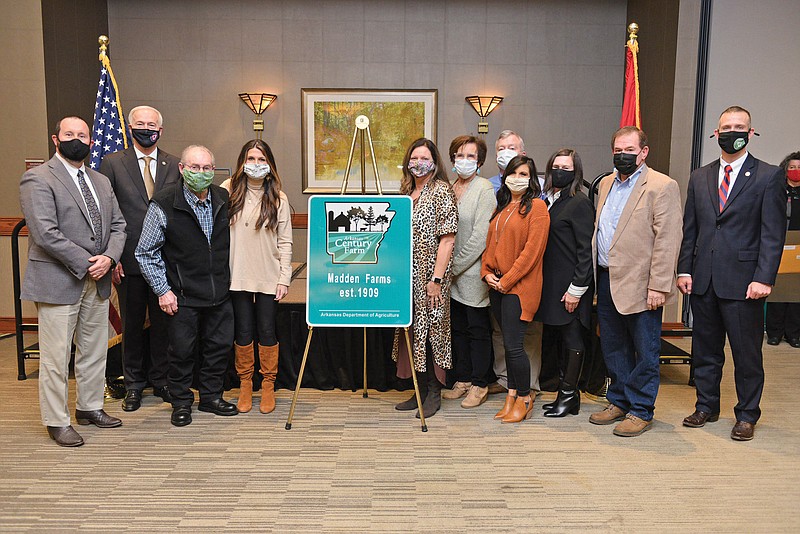 Madden Farms is one of 30 farms recognized in 2020 by the Arkansas Century Farm Program, administered by the Arkansas Department of Agriculture. The program honors farms with more than 10 acres owned by the same family for at least 100 years.

During the ensuing years, the Madden family owned and operated more than 8,500 acres of farmland, producing cotton, rice, soybeans, wheat and grain sorghum. They also raised cattle and swine. The Century Farm honor is for 78 acres of the Maddens’ farmland.

The Maddens’ youngest son, Roy Elmer Madden, was born in 1909, the same year his father, John Joseph Madden, bought the land in Jackson County. Roy inherited the land after his father died in 1919. Roy’s mother, Susan Etta Walker Madden, married again, to Hervey Louis Cobb, and she died in 1969.

Roy Elmer Madden and his wife, Lola Iris McFadden, began their married life on the farm in 1929. Roy and Lola raised 10 children — Alton, Etta Lee, Joe, Stanley, Kenneth, Ralph, Norman, Dale, Elaine and Hervey. Another daughter, Royslen, died when she was 3. The family eventually grew to include 30 grandchildren and numerous great-grandchildren.

Representatives of the 30 Arkansas Century Farms gathered on the afternoon of Dec. 11 at the Embassy Suites by Hilton in Little Rock to receive official recognition as a Century Farm from Gov. Asa Hutchinson and Secretary of Agriculture Wes Ward. Members from the Madden family attended the official event, but they also held their own private celebration that morning, also at the Embassy Suites.

“We had 68 people here,” said Kenneth “Kenny” Madden Jr., 59, of Greers Ferry, a son of Kenneth Madden, who, along with Hervey Madden and Elaine Madden Thomas, are the three children who remain living of the late Roy and Lola.

“We were limited to 10 people at the official ceremony because of COVID-19 restrictions,” Kenny said. “We had representatives of each of the 10 families, except Joe Madden, and including my dad, my uncle Hervey and my aunt Elaine.”

Kenny said 11 of the original 30 cousins attended the family celebration; 25 cousins are still living. He said there are 60-plus second-generation cousins.

“The room was full,” Kenny said. “We had a blast. We had displays set up, including old photos, original cotton sacks and scales. We had a three-tier cake made by Blue Cake Co. in Little Rock. Riceland Foods provided packaged samples of rice.

“One of the first cotton gins in Arkansas was placed on this farm,” Kenny said. “Cows were used to take the cotton to the gin; hence, the community name, Cow Lake.

“I’m very proud of an older family that came from humble beginnings to achieve success,” Kenny said. “We can’t be better for the future unless we understand and appreciate our past. The work ethic — faith, family and commitment — was always displayed.

“I’m amazed that all 10 children never divorced,” Kenny said. “They all remained married for the entire time. That’s just unheard of in this day and time.

“It was not always easy, but through faith and hard work, they all made it,” he said. “My favorite memory is the real closeness of the family. We always had someone to play with, work with, mostly, as we all worked on the farms growing up.”

Jeff Madden, 55, of Jonesboro, another of the original 30 cousins, said a partnership formed by Roy and six of his sons farmed the land throughout the years. The partnership, Madden & Sons, included brothers Stanley, Kenneth, Ralph, Norman, Dale and Hervey; the oldest brother, Alton, died in 1968.

“It was a big business,” Jeff said. “Roy established the legacy, and Lola was there every step of the way. Grandpa Roy was the boss. … Granny Lola was our favorite cook. She cooked for the whole family. If we were near her home on a Sunday, we knew we would be welcome for dinner. We spent a lot of time at her house.

“Faith, education and a strong work ethic have been the foundation of the Madden family’s legacy,” Jeff said. “Lola was born in the early 1900s and was one of few women in the community to complete a high school education. She rode the train from Algoa to the First District Agricultural School at Jonesboro. Roy was largely educated by his mother and grandmother and later went on to obtain a teaching certificate. Roy and Lola instilled the same desire for an education in their children and grandchildren.”

Jeff said eight of Roy and Lola’s children attended college, and two served in the military. After attending college, five of the sons returned to the farm to actively engage in the farming operation.

“The legacy of hard work, faith in God and education was passed on to the grandchildren,” Jeff said, adding that many of the grandchildren and great-grandchildren have college degrees. “Many have pursued professional careers while honoring their family through church and community service.

“Time on the farm taught us the importance of working hard and setting goals, then putting a plan in place to attain those goals,” Jeff said. “Watching my grandpa leading singing in church and my aunts and uncles actively living their faith and leading others toward God inspired us all. I wish my children had the same opportunity of life on a farm, especially growing up with extended family living within 10 miles of each other.”

Steve Reid, 67, of West Memphis is the oldest of Roy and Lola’s grandchildren. He recalls his time on the family farm:

“My experiences on the family farm instilled in me a strong work ethic,” Steve said.

“It was common for me to break something down for repair, knowing that another family member could piece it back together,” he said. “It has taught me to never be afraid of tackling a project.”

Kenny Madden said he believes “the Madden family farm and its heritage are alive and well today.

“It is full of memories and family traditions,” Kenny said. “Faith, family, hard work and education are the secret to the longevity of the Madden family. The legacy of Roy and Lola Madden has instilled a deep sense of pride in their 10 children, 30 grandchildren and future generations.”

Kenny said the family is considering placing the Arkansas Century Farm sign in the family cemetery, Walker-Madden Cemetery, in the Cow Lake community.

“All of our relatives are buried there,” Kenny said.