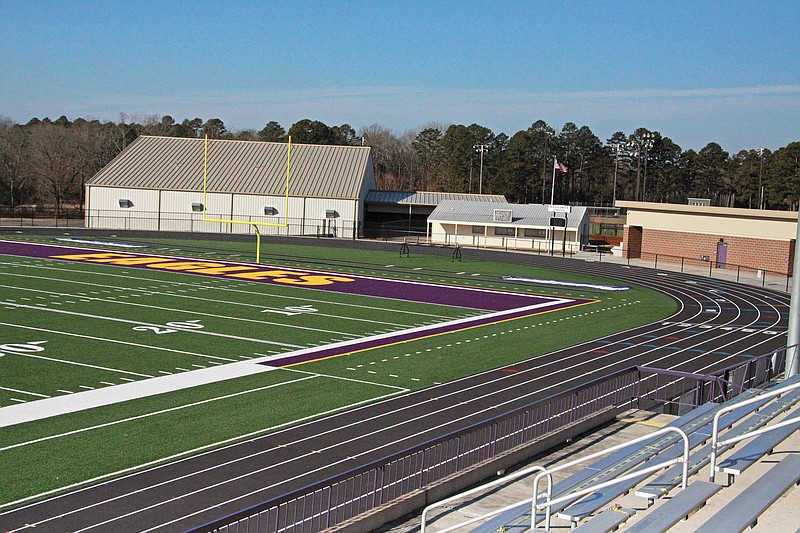 Mayflower High School recently upgraded its athletic facilities that include a new field house, a training room, coaches’ offices, a resurfaced track and the installation of synthetic turf on the football field. In 2019, the district extended its debt-service millage for another 13 years to fund the $6 million project.

MAYFLOWER — Mayflower High School got a much needed face-lift recently, thanks to a millage extension that passed more than two years ago. The new facilities, which opened Jan. 4, include home bleachers, a track, and a field house that offers an indoor practice facility and a weight room.

The old facilities were more than 30 years old, and although they had been renovated several times, there were problems with flooding, vermin and other issues that had been pushed to the side, head football coach Austin Emerson said.

“I think it just shows that we care about our athletes, and now we have some of the nicest facilities,” said Emerson, who has been with Mayflower for three years. “Now we just have to play as good as we look.”

In 2019, the district extended its 15.5 debt-service millage for another 13 years to fund the $6 million project, thanks to a special election. In an Arkansas Democrat-Gazette article from 2019, Superintendent John Gray said the project also included a training room, coaches’ offices, a resurfaced track and the installation of synthetic turf on the football field. The field house and the track were built in the 1970s.

“We have overhauled this place — it is beautiful,” Emerson said. “I think more kids are wanting to play football now. It has really helped us a ton. Our offseason numbers are up.”

Emerson, who also drives a bus for the district, said he has been trying to recruit a few ninth-graders for football since they were in the seventh grade. Now, with these new facilities, some of them are finally participating.

Emerson said that even though the school has a new weight room, all of the old equipment was carried over to the new facility. He said if there is any money left over at the end of the project, some of it may be used to purchase new equipment.

“The project itself took about a year and half, but we knew, coming into this school year, that it would be completed,” Emerson said. “The facilities were fully completed by December.

“The big thing our facilities needed was the field. Our stadium and our bleachers were in rough shape.”

The entire project was priced at about $6 million, Gray said.

“The biggest challenge was raising the finances to do it,” Gray said. “We have been looking at doing this project for many years.

“We finally asked for a millage extension, and we were very thankful and appreciative of the overwhelming response we received from the community. So the biggest challenge was the fact that it took quite a few years to get into position to do it.”

He said it was also critical that the school spend the money as efficiently as possible.

In the building process, Emerson said, the construction company was able to fit an indoor facility within the budget. He said adding the indoor practice facility was the icing on the cake.

The turf field can be used by all sports, and it saves coaches time on maintenance and can be used in all types of weather. Athletic Director Brent Stallings said he hopes the new track will generate more interest in the sport among the student body and, hopefully, get more participation.

“Our original track had gotten in such disrepair that it was unsafe to do many track events,” Stallings said. “We still have to find the funds to purchase the equipment it takes to have a track program, including hurdles, jumping and pole-vault pits, and shot and disc rings.”

“The community stepped up and voted to extend the millage in order for us to be able to build it, and I hope that they share in the pride of such a facility,” Stallings said. “It was kind of a disappointment that we did not get to showcase it and have fans be able to enjoy it to the fullest because of COVID-19.”

“It is very refreshing for us,” Gray said. “The old facilities were wearing out, but I think this motivates our kids and makes the place more inviting for our students.

“I also believe it is a boost to the economy and the Mayflower community.”

Stallings said the field house and the indoor facility are the things he is the most excited about and that were needed the most.

“We had outgrown our current field house and weight room, and the indoor practice area will allow our outdoor sports to always have a place to practice,” Stallings said. “I am extremely excited to see how it influences our athletics, from participation to better performance.

“It is a great thing for Mayflower High School, and I hope everyone is as proud of it as I am.”