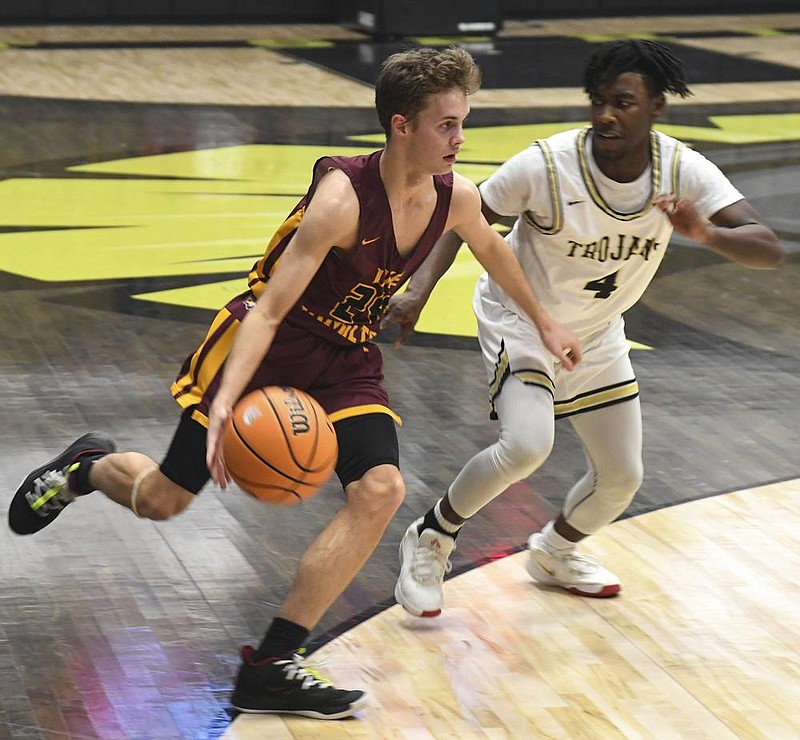 Sophomore Zac Pennington (left) has formed a formidable one-two punch with fellow sophomore K.J. McDaniel to lead Lake Hamilton to a 2-1 start in 5A-South play and an 8-4 overall record. (The Sentinel-Record/Grace Brown)

Size may be a problem this year for Lake Hamilton, but the Wolves certainly aren't devoid of talent.

A slew of gifted underclassmen have been at the controls for Lake Hamilton (8-4, 2-1 5A-South) throughout the first half of the season, and Coach Scotty Pennington believes the best is yet to come.

"We're starting two sophomores and three juniors," he said. "Young, but we've got a lot of skilled guards and kids that shoot the ball well. When they're on, it's a joy to watch. And then again, when they're off, it can get kind of ugly sometimes."

More often than not, the Wolves have been the ones looking better than their opponents this season. Lake Hamilton has won five of its last six encounters and is coming off an impressive 64-59 victory over cross-town rival Hot Springs behind a 17-point effort from sophomore K.J. McDaniel. The 6-4 guard, whom Pennington said can explode for 20-25 points in a hurry, has formed a formidable one-two punch with fellow sophomore Zac Pennington.

"Those two have been good for us," the elder Pennington said. "Zac has interest from UCA, Liberty, Elon, some of the smaller Division I schools. And then K.J. is getting interest, too, and received a call from DePaul over the summertime. They're both good prospects and understand the game really well to be as young as they are.

"Zac's kind of been our most consistent guy overall. His assist to turnover ratio is like four to one, which is great, and he's averaging about 14.5 points. The thing is, we need both of them to continue to play a little above what a sophomore should."

Pennington also noted that his team isn't very big either. Junior Chase Jessup, a 6-4 forward that drawing Division I football interest, is their primary target inside. That size deficiency has been an issue for the Wolves whenever they've faced bigger teams.

But Pennington likes what he has in his young group. He's hoping they can produce enough to help the Wolves get into the postseason, where he'll have even more youthful talent at his disposal.

"We have our junior high team that's undefeated, and honestly, haven't had anybody play them inside of 20 points the entire season," he said. "We've got four kids on that freshman team that we'll bring up as soon as their season is over. If we can qualify for state, they'll honestly make us a completely different team.

"We'll be pretty dangerous. We've got a kid on that team, Ty Robinson, who's a 6-3 guard that's averaging about 25 points a game. It's hard to find anyone better in the state of Arkansas than him in that class. But there's several in that group that are going to help us."

Another crack at No. 1

The Lady Bulldogs will have a chance to rectify that in the second meeting tonight in Tuckerman.

"Against Melbourne, I just don't think we played well," said Soden, who starts two juniors and three sophomores. "We've been pretty consistent throughout the season. I'm sure Melbourne didn't think they played well either. But if we're going to have a chance, we've got to change that."

A victory tonight would put Class 2A No. 3 Tuckerman (18-2, 5-1 2A-2) a half-game up in the standings over No. 1 Melbourne (16-1, 5-0), but Soden doesn't expect anything to come easy against the Lady Bearkatz. The teams battled throughout in their earlier game on Jan. 11, one in which Melbourne pulled away in the fourth quarter to win 45-34.

"What you can't tell on film is the length that Melbourne has," he explained. "You can't simulate that stuff in practice. The [Jenna] Lawrence kid is 6-2, but man, her wingspan is crazy. And then they've got the other 6-footer inside also. You just don't come across that in girls' basketball very often.

"I thought we were a little intimidated the first time. We weren't sure how good we were, but now we kind of see that we can play with them for the most part. So we're looking to have a more complete game this time around."

North Little Rock picked up perhaps its biggest victory of the season Tuesday night at Bryant, but the road to winning a second consecutive 6A-Central Conference title doesn't get any easier for Johnny Rice's team.

The Charging Wildcats (10-1, 4-1) sit alone in second place in the standings going into today's game against a Fort Smith Northside team that is playing its best basketball of the season after going through a slump.

The Grizzlies (7-7, 3-2) have won three consecutive games after losing six of their previous seven.

"I told our guys, that with Northside, you can't look at their win-loss record," Rice said. "They hadn't had everybody there, but they've got tools. Northside's big guys are athletic, and they've got shooters.

"We'll have to have different approach than what we did against Bryant because Northside doesn't have a [Camren Hunter]. But they always play us tough, and we've got to be ready."

Star City Coach Becky Yarbrough admitted that she felt a sense of complacency around her Lady Bulldogs at the start of the season that she hadn't been used to seeing.

That feeling isn't necessarily an unusual sentiment for a team that was coming off an undefeated, state championship season. But it is something that Yarbrough knew could cause the Lady Bulldogs trouble down the line.

"We were still in that mode of last year's team," said Yarbrough, who led Star City to a 31-0 record in 2019-20 and a share of the Class 4A state title. "Even though we had everybody back, it's never the same because it's a new year. We had that complacency. ... but then the kids woke up after we got beat by Nashville at home early.

"They realized that 'hey, we're not getting the job done.' The Greenwood game is the first time I actually saw them look like they did last year."

The Lady Bulldogs (16-3, 5-0 4A-8) lost 79-71 to Greenwood, but they have blasted everyone since. Star City, ranked No. 2 in Class 4A, has won its past four games by at least 25 points going into today's clash against Camden Fairview.

Needless to say, Yarbrough is pleased with how her team has responded.

"They've played with intensity," she said. "They're looking like the old Lady 'Dogs."

Rector may not catch Marmaduke in the 2A-3 Conference standings, but that has done little to deter the team from trying to get into the postseason for only the third time in program history.

"We try to treat not only every game but every day as if it was our last because you never know if it'll get taken away," said Rector Coach Mitchell Weber, whose team is a game and a half behind first-place Marmaduke. "That's even more important as we get closer to postseason play. We can't take anything for granted.

"We're trying to stay in the two-hole in the conference, at least. I don't know if we'll be able to sneak up on Marmaduke because they're rolling right now."

The Lady Cougars (12-7, 8-2) have been playing well lately, too. Rector has won four of five behind a team full of sophomores and juniors. Freshman forward Chloe Baugh has also made waves for Weber's team this season.

Still, he said he doesn't believe the Lady Cougars have hit their stride. With teams jockeying for position over the next few weeks to host a home district tournament game, Weber feels now would be a good time for Rector to switch gears.

"We're hosting a regional this year, too" he said. "We definitely don't want to host it and not be a part of it."

Southside Batesville girls Coach Jordan Riley won his 100th career game in his five years as a coach on Jan. 19. Also, Blytheville boys Coach McKenzie Pierce both his 100th game with the Chickasaws in his fifth season at the helm. ... The New School boys Coach David Ferrell gained victory No. 600 on Tuesday when his Cougars beat Thaden 83-31. ... Both Georgetown and Missouri extended offers to North Little Rock's Kel'el Ware within the past week. The 7-0 junior also has offers from several other NCAA Division I schools such as Arkansas, Florida, Kansas, Texas Tech and Virginia Tech.