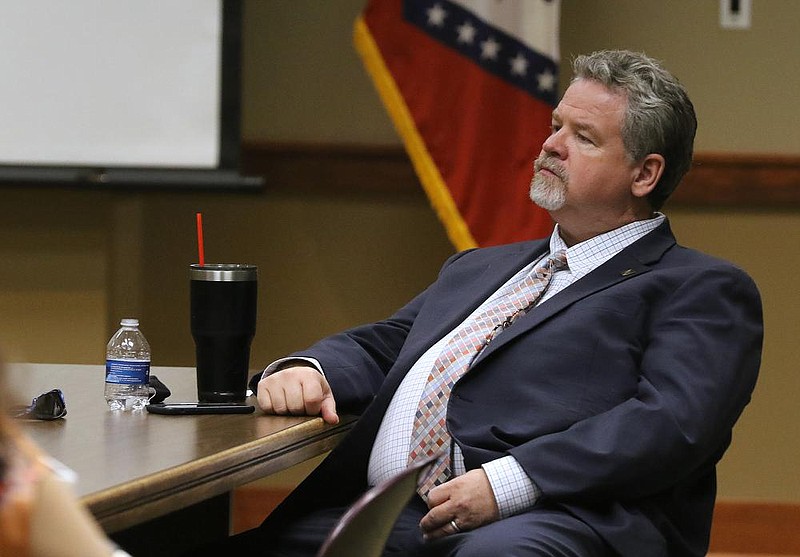 State Sen. Alan Clark, R-Lonsdale, listens to a presentation during the Education Caucus of the Arkansas General Assembly's meeting at the Association of Arkansas Counties building in Little Rock in this Monday, Aug. 10, 2020, file photo.

Legislation that would set joint custody of children as the default award in divorce cases was advanced by the Senate Judiciary Committee on Wednesday, over the objections of the state's judges and Arkansas Bar Association.

Senate Bill 18, by Sen. Alan Clark, R-Lonsdale, would create the "rebuttable presumption that joint custody is on the best interest of the child," in the state's family law codes. That presumption could be overruled either by a judge based on "clear and convincing evidence," or by joint agreement of the parents.

Clark said he sought to enact the new standard because "it's about the need of fathers in the raising of children."

Current law, established in 2013, states that joint custody is the "favored" outcome.

Since that law was passed, however, lawmakers who advocate greater custody for fathers have expressed frustrations that judges are not following the will of the Legislature. Attempts to pass legislation similar to SB18 died in a House committee two years ago.

On Tuesday, the Senate Judiciary Committee passed the bill on a 7-1, party-line vote. Sen. Stephanie Flowers, D-Pine Bluff, was the only member of the committee to vote against the bill.

Ouachita County Circuit Judge Hamilton Singleton, a member of the state's Judicial Council, and Angela Mann, a representative of the Bar Association, both spoke against the bill, arguing that it would raise the bar for a judge to limit custody to one parent in the interest of the child.

Several Republicans, however, prodded Singleton about benchbooks handed out to judges as late as 2018 stating that case law "indicates that joint custody is not normally favored" -- five years after the lawmakers voted to say that it was.

"It almost sounds like this book is saying, 'We know the law says this, but the courts don't care,'" said Sen. Jim Hendren, R-Sulphur Springs.

No one spoke in favor of the bill Wednesday, after Clark said he called off several dads who were signed up to speak. Clark said those dads will share their testimony if the bill reaches the House Judiciary Committee.

Wednesday's vote sent SB18 to the Senate floor for consideration.