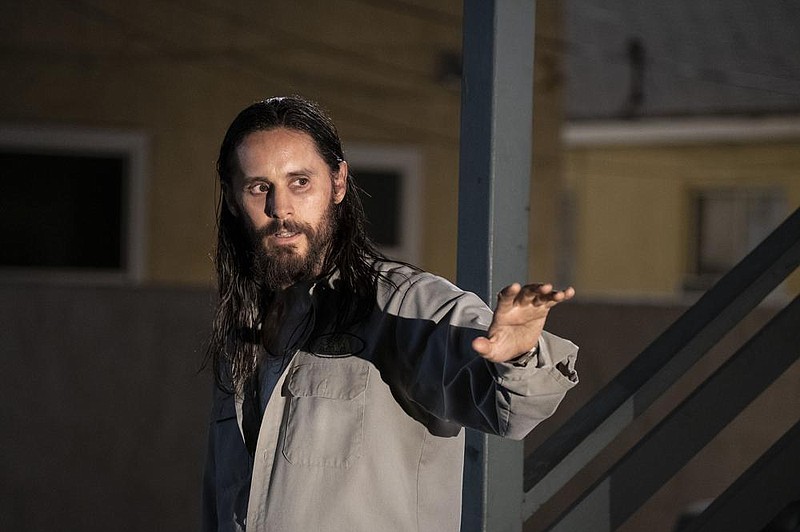 Suspected serial killer Albert Sparma (Jared Leto) plays a dangerous cat-and-mouse game with the lawmen investigating him in “The Little Things,” a ’90s-set period piece that recalls some of that era’s police procedurals.

Crime isn't my usual genre. I don't dislike crime stories, I just don't find myself attracted to them very often.

But once in a while a good crime movie will come along that I really enjoy, like "The Highwaymen" a couple of years ago. Sometimes I'll come across a crime film trailer and think, "Yeah, OK. That looks solid."

That was the case for "The Little Things," directed by John Lee Hancock, who (are you kidding me?) actually directed "The Highwaymen." (I just Googled his name and found that under his credits. Talk about coincidence.)

Funny story about "The Highwaymen." Right after I wrote the review, the script writer, John Fusco, sent me an email thanking me for the "great review." Thankfully, Fusco didn't write this movie, so I don't have to feel awkward when I type some negative things about it a few paragraphs down.

Hopefully, Warner Bros won't see this review (which will admittedly be 75% negative), and decide to throw my future advance screener requests in the trash. But if my request for "Godzilla vs. Kong" gets scrapped, I'll know why.

"The Little Things" is not a terrible movie, but it is a "January movie." And by that I mean, typically studios save good movies they think will make a lot of money for summer blockbuster season or Christmas. Other movies? The stinkers, the unexpected midrange stuff, they tend to end up in January.

"Replicas," that horrible science-fiction cloning film with Keanu Reeves, was released in January. First movie opening weekend of 2020? An awful reboot of "The Grudge," which was itself already a remake of a superior (and much more terrifying) Japanese horror film called "Ju-On: The Grudge."

In recent memory, the only good movie I recall seeing in January was the American release of "Weathering With You," which was amazing. But seeing as that's an imported movie, I think it gets its own special category.

"The Little Things" is very much on-brand for a January movie.

The film's strongest advantage and what initially drew me to it are its dual protagonists, Deke (Denzel Washington) and Jimmy (Rami Malek). These are great actors, and for the first half of this movie, they made me think this was going to be an intelligent thriller.

Washington and Malek have solid chemistry starting off. The story sees them working together to track down a serial killer in 1990s Los Angeles.

The setting was a little confusing for me. I mean, when you intentionally set a film in the 1990s, I assume it's for a purpose, theme, plot points or something. But in "The Little Things," the '90s just seemed like a random period. There's nothing special in the story I detected that made me think, "Oh, THAT's why they set it then."

Apparently the first draft for the movie was written in 1993, Deadline reported, and Steven Spielberg was supposed to direct. He eventually declined, believing the film was too dark. Yeah, and "Saving Private Ryan," which you directed a couple of years later, was practically a children's film. Criminy.

Writer/director Hancock told Deadline it was a contemporary piece when he wrote it, and now it's a period piece. "The Little Things" just seems like it was set in 1990 because Hancock didn't want to update the film to two decades later.

Regardless, Malek and Washington did a good job hooking me into the movie, especially Malek. He just had this cheeky suave attitude I really enjoyed. And Washington, well he's himself. A little bit of a smart aleck with a sense of humor only he seems to understand.

There's this one line from Washington that really stuck out. The film goes to the trouble of painting Washington as a man troubled by his relationship with God (for some reason). So at one point, Jimmy asks him, "Do you believe in God?"

And Washington responds something like, "When I see a sunset, a thunderstorm, or dew on the grass, I believe in a god. When I see this [meaning a murdered girl], I think he's long stopped caring." It was a good line. I wish the movie had more like it.

Throughout the movie, Washington shows the audience he's fixated on a crime he couldn't solve and some dark mistake he made. The film uses a flashback to an earlier crime Washington couldn't solve, and it shows another second or two of the flashback each time it appears, never giving the viewers a full understanding of that scene until the very end of the movie.

When I heard him say the movie's title in the line, I immediately thought of film critic Jeremy Scott from the popular YouTube series "Cinemasins." Whenever a character in the movie says the film's title he shouts, "Roll credits!"

So I (and my wife) have picked up that habit as well.

Around the time Jared Leto shows up is when the movie takes a turn and starts to unravel. All that intelligent goodwill the movie built up in the first half just starts to wear down with stupid choices on the part of the protagonists until I'm left with an inexplicable ending that resulted in my frustration.

"The Fugitive," this movie is not. Malek and Washington can only do so much to save the film from its ending. But by God they try.

Leto tries to act like a sassy Keanu Reeves, and it mostly comes off as fake. A couple of lines got a chuckle, but he says so many random things in an attempt to come off as funny and/or creepy that it's kind of tiresome.

I just don't think he was the right guy for this part. And he seems to infect the other actors with unbelievable-itus. There's a scene where Deke is interrogating him, and he loses his temper. Denzel can do a good angry scene. But his rage in that interrogation isn't up to snuff. As the movie went on, he and Malek seemed to tire of being in it for some reason.

And the more time Malek spends with Leto's character, Albert Sparma, the dumber he seems to act, at one point just getting in the car with Leto and riding off without a plan.

The final scenes feature way too much driving, and the plot just seems to unravel into a series of random choices I couldn't find a good reason for existing.

By the time the final scene plays, and Deke's dark sin is revealed, I was left wondering what the real message of this film was. Cops aren't perfect? The end justifies the means? I had no clue.

This movie wanted to be smarter than it ended up being. For a psychological thriller, it doesn't do a good job of dropping clues and giving the audience bread crumbs to follow. Though when you end your movie with a series of seemingly random choices, I guess you don't really have a destination for the bread crumbs.

Denzel and Malek offered me a good movie with some decent writing at the start. But then Leto came into the film.

The movie does do a good job at showing parallels between Deke and Jimmy. It was good to see Jimmy was on ­Deke's same tracks throughout the movie, just coming up a few decades later. So I'll give the film credit for accomplishing that.

In the end, I came back to my initial assessment. This is a January movie for a reason.