Bus trip with his head in her lap sealed the deal 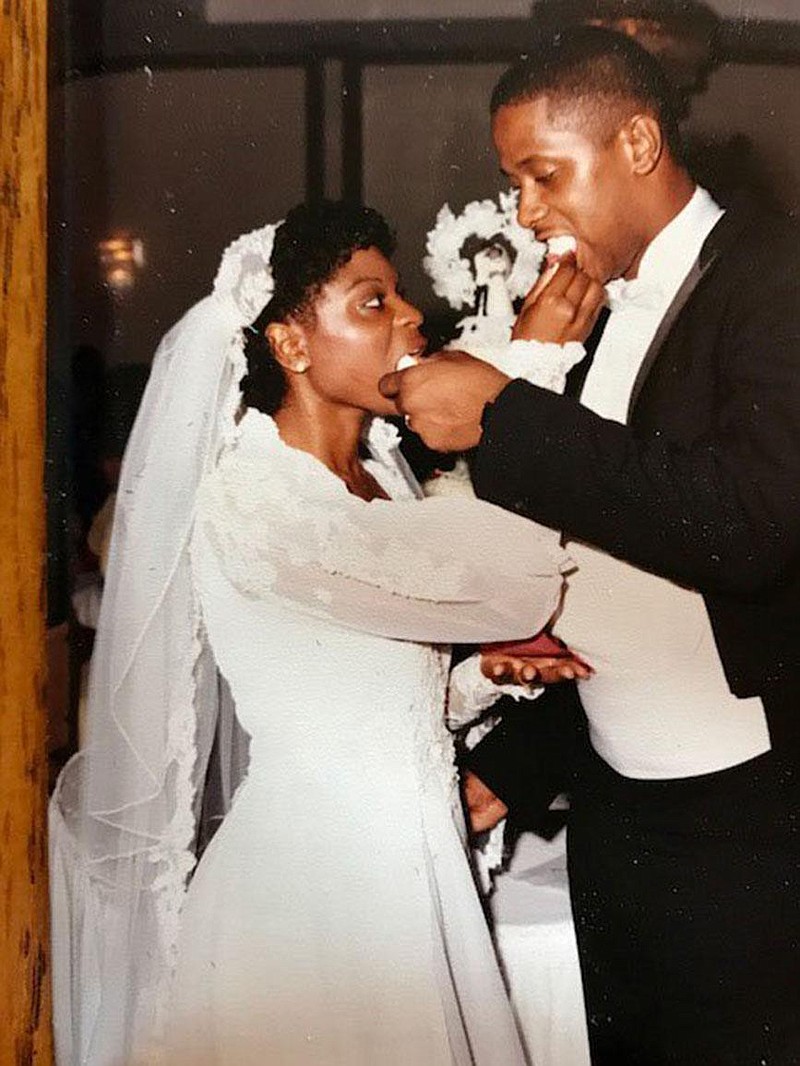 Wanda Caldwell and Earnest Merritt were married on Aug. 31, 1985. They got to know each other while working in a federal summer program in high school and started dating after the endof-summer field trip. “What really cemented the deal was Earnest was getting sleepy on the way back from the Six Flags trip and he laid his head in my lap,” she says. (Special to the Democrat-Gazette)

Wanda Caldwell and Earnest Merritt went to crosstown rival high schools in Midland, Texas, but they formed an alliance that has seen them through more than 40 years together.

They were in the same fourth-grade class, though they didn't know that until their former teacher confirmed it for them years later. Earnest's family had moved by the time he got to high school and they were in different attendance zones, but during the summer between their sophomore and junior years they worked in a federal summer program together.

Wanda spent mornings in the program training in a daycare, and Earnest spent that time learning woodworking. In the afternoons, they came together for life skills classes.

It was there that they got to know each other, chatting between lessons on economics and developing interview skills. As the program came to a close, the teenagers in the summer program went on a field trip to Six Flags Over Texas.

"We ended up sitting next to each other on the bus," Wanda says. "I think about this now, what really cemented the deal was Earnest was getting sleepy on the way back from the Six Flags trip and he laid his head in my lap. It was like, 'OK, so maybe he's a pretty nice fella.'"

Their relationship was just getting underway as summer ended, and it continued, much to the dismay of some of their classmates, throughout that year and the next.

"Some of the guys that were on the Midland High basketball team, you know, we were friends," Wanda says. "It made it really uncomfortable when we have this cross town rivalry matchup when we would go to the high school game. I would be there with my friends and normally I would root for my team, but my boyfriend was on the cross town rivalry's team, so that always put me in a precarious situation."

After graduating from high school in 1979, Wanda went to Angelo State University in San Angelo, Texas, and Earnest went to McMurry University in Abilene, Texas. They visited each other on weekends and Wanda sometimes travelled during the week to watch Earnest play basketball and they went to each other's homecoming activities.

They got engaged in 1984, a bit later than Earnest might have wanted.

"I asked her to marry me before I finished college and she told me she wouldn't marry any dumb boyfriend and I needed to stay in school until I finished," he says. "She said, 'I'll work on my master's while you finish your bachelor's.'"

They exchanged their vows on Aug. 31, 1985, with 10 attendants each and a crowd of family and friends looking on.

Shortly before their wedding, they took part in a photo shoot with the Midland Reporter Telegram. The newspaper piece featured photos of them shopping for a ring, sampling a spa, choosing housewares and furniture, picking out a car and getting married.

"Every summer I dreamed since I was in, I guess, junior high that I would get to do that," Wanda says. "It was a two-day photo shoot, going all over town to various businesses, and we had a blast. It was a very fun experience."

They honeymooned in San Antonio.

"We didn't have a lot of travel experience, so I think we ate at McDonald's in San Antonio," Wanda jokes.

Earnest had prepared their apartment in Abilene for them before the wedding, including buying bedroom furniture.

"He picked it out himself and he did a pretty good job," she says. "That was our first big purchase, with a full-size bed, dresser, chest and a night stand."

Wanda was a claims adjuster for an insurance company in Abilene for a while; Earnest was the director of the Boys and Girls Club.

In 1998, Wanda accepted a job working with the federal Housing and Urban Development in Lubbock, Texas, some 164 miles from their home in Abilene. The position was to be temporary, so Earnest stayed in Abilene with their children, in first and fourth grades at the time.

"She never missed a weekend being home," says Earnest, who was an at-risk coordinator for Abilene High School by then.

He and the kids spent their summer vacations in an apartment with Wanda in Lubbock.

"They would tell everyone they were going to their summer home," Earnest says.

The family moved to Lubbock in 2001. In 2014, Wanda was transferred to Little Rock as director of the U.S. Department of Housing and Urban Development. Earnest is a local office manager for the Department of Workforce Services.

Their sons had both left home by then so logistically it was an easier transition, Earnest says. Cullen Merritt, PhD, lives with his wife, Breanca Merritt, PhD, in Indianapolis; Cameron Merritt lives in Chicago.

Wanda and Earnest celebrated their anniversary in August with a casual trip to Hot Springs.

"We had a wonderful time," Wanda says. "But I would love to go to Hawaii for one of our anniversaries in the future, when all of this virus stuff is over."

She says: “He had pretty eyes.”

He says: “You know you aren’t to see the bride before the wedding because that would bring bad luck, but I was driving down the street that morning and I saw her and she started ducking down in the seat.”

She says: “I just felt honored that I would become a part of his life and was looking forward to the journey.”

He says: “You have to be willing to lose a lot to make Mama happy. It’s no big deal about losing if you can keep your marriage strong and healthy.”

She says: “You have to be careful who you include in your family matters and not have people too close to your decision-making.” 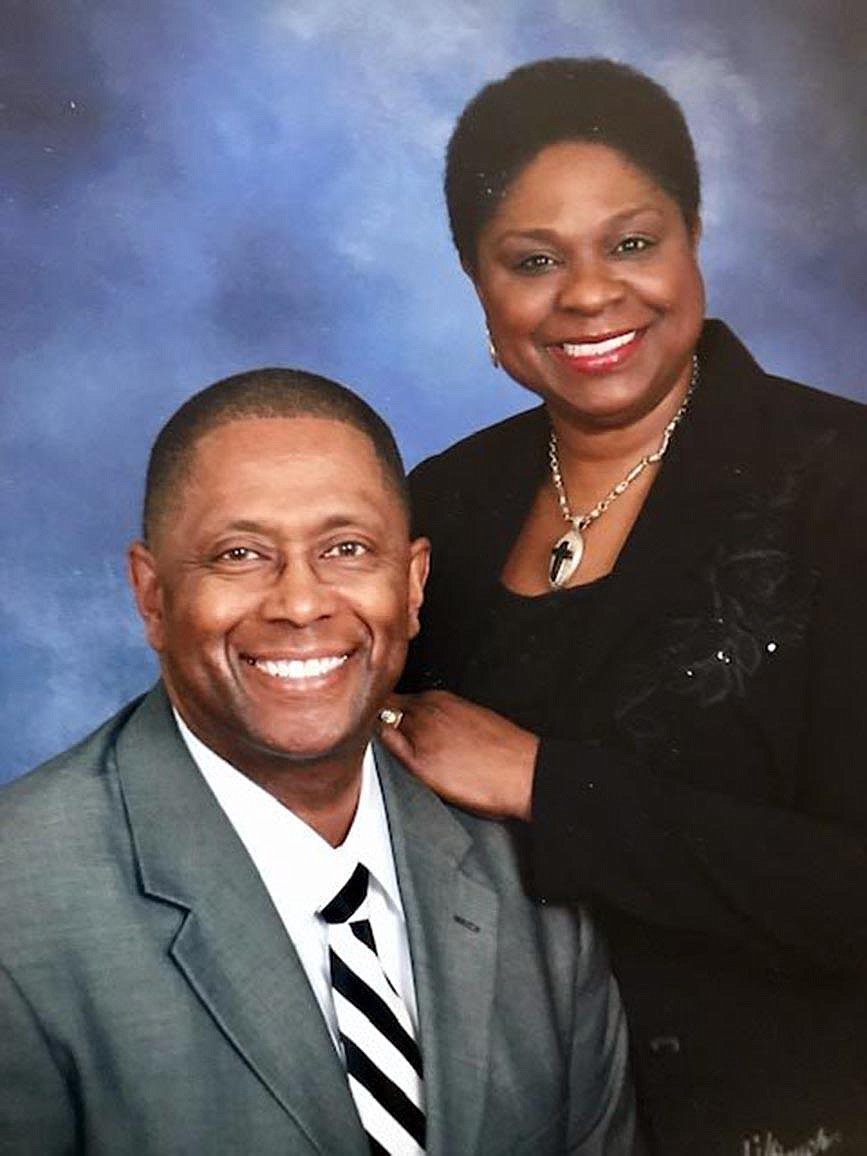 Earnest and Wanda Merritt moved from Lubbock, Texas, to Little Rock in 2014. “I said I would follow her around my whole life, so I might as well follow her to Little Rock,” Earnest says. “We made it down and we enjoy Little Rock.” (Special to the Democrat-Gazette)
ADVERTISEMENT