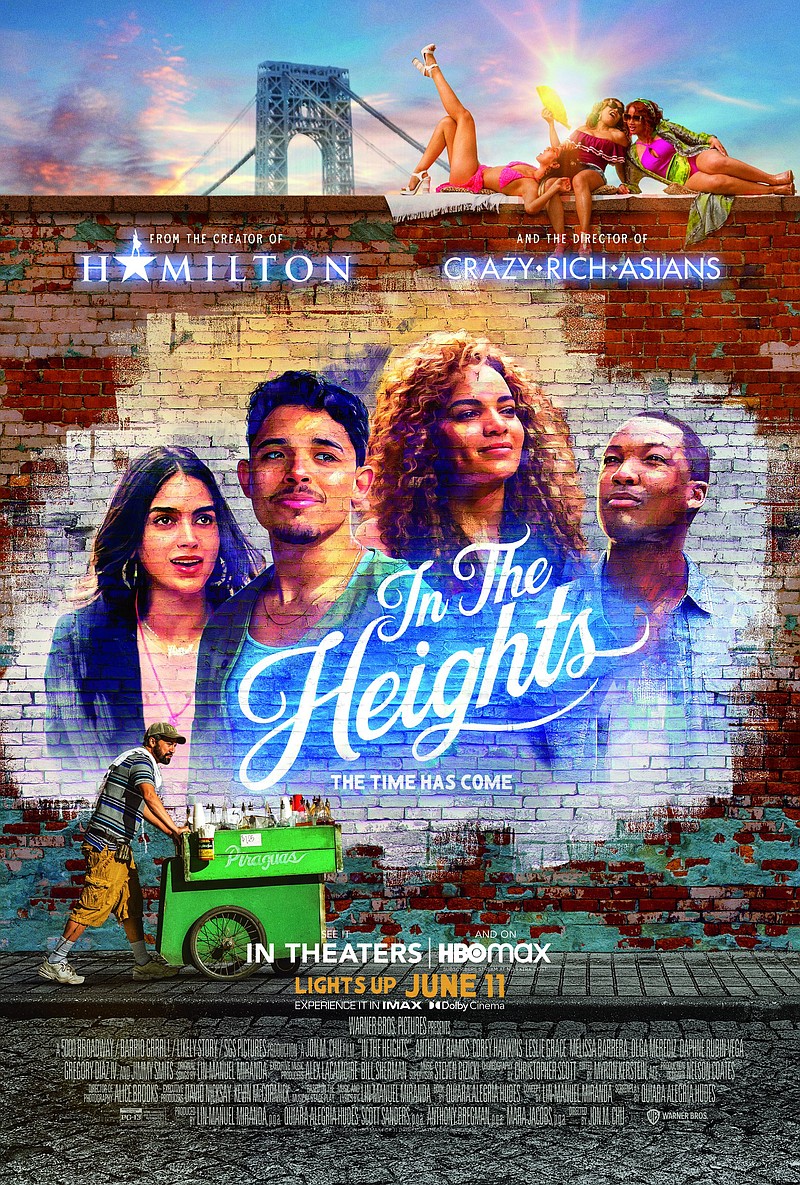 "In the Heights" (PG-13, 2 hours, 23 minutes, HBO Max) A vibrant musical escape to Manhattan's close-knit community of Washington Heights, this spirited high-stepping production from Lin-Manuel Miranda ("Hamilton") is all about families, hopes and dreams, memories, and the ups and downs of a present day that, despite the threat of a looming summer blackout, never loses its sunny sense of optimism. With Anthony Ramos, Melissa Barrera, Jimmy Smits; directed by Jon M. Chu ("Crazy Rich Asians").

"Lupin" (Netflix) The second season of this sophisticated, stylish series continues the efforts of debonair thief Assane Diop (Omar Sy) who intends to avenge his father for the cruelty inflicted on him by a rich, aristocratic family. With Ludivine Sagnier, Clotild Hesme, and the magnificent backdrop of the city of Paris.

"Wolfgang" (1 hour, 18 minutes, Disney+) Most of us have heard of superstar chef Wolfgang Puck, although we're far too timid to cross the threshold of one of his storied fine-dining restaurants. This biographical documentary may ease that feeling of being an outsider by introducing viewers via interviews, home video, and photographs to the Austrian-born celebrity who, despite his great success, struggled and sacrificed his way to fame, both in the culinary world and the restaurant empire-building business.

"Bosch," Season 7 (Amazon Prime) The final eight-episode season of this addictive, aggressive cop drama (based on the Michael Connelly novels) catches viewers up with the convoluted life and unconventional work habits of LAPD detective Hieronymus Bosch (Titus Welliver). The season's action is based on Connelly's 2014 book "The Burning Room" and the arson case that inspired it. With Jamie Hector, Madison Lintz, Lance Reddick, and Amy Aquino.

"Sophie: A Murder in West Cork" (Netflix) A three-part documentary mini-series follows the controversial investigation of Sophie Toscan Du Plantier, a 39-year-old French film and TV producer who was killed while at her isolated holiday cottage in West Cork, Ireland, in 1996.

"Flack" (Amazon Prime) Don't make the mistake of thinking that a series about well-dressed female publicists in London is going to be too fluffy and feminine for your hardscrabble taste. There's a thing or two to learn about being ruthless and resourceful by watching acerbic Robyn (Anna Paquin) who, despite assorted personal problems, is brutally direct at handling the absurd predicaments her agency's clients find themselves in. With Arinze Kene, Rebecca Benson, Rufus Jones, and Sophie Okonedo as her even more cutthroat boss.

"False Positive" (R, 1 hour, 32 minutes, Hulu) A creepy horror thriller in which Lucy (Ilana Glazer) and Adrian (Justin Theroux), after failing to conceive, find the treacherous path to parenthood cleared by a renowned fertility doctor (Pierce Brosnan). But after finally becoming pregnant, Lucy begins to have uneasy feelings regarding her physician's abilities and charm. And no wonder. With Sophia Bush, Gretchen Mol; directed by John Lee.

"The Sommerdahl Murders," Season 2 (Acorn TV): A picture-perfect Danish coastal town is the setting for a trio of murder investigators: Detective Chief Inspector Dan Sommerdahl (Peter Mygind), his forensics expert wife Marianne (Laura Drasbaek), and his best friend Detective Flemming Torp (Andre Babikian), all of whom share more than a professional relationship. Based on the crime fiction series by Anna Grue.