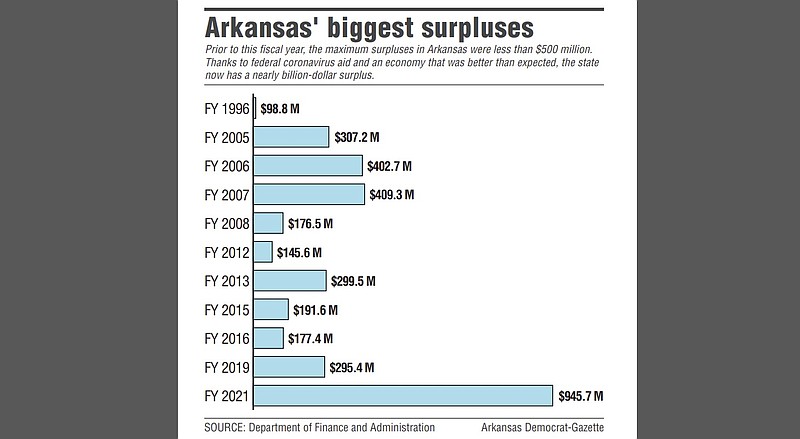 Prior to the 2021 fiscal year, the maximum surpluses in Arkansas were less than $500 million. Thanks to federal coronavirus aid and an economy that was better than expected, the state has its first billion-dollar surplus as of July 2021.

The fiscal 2021 surplus is more than twice the previous record of $409.3 million in fiscal 2007, according to the state Department of Finance and Administration records.

Gov. Asa Hutchinson said the state finished the fiscal year stronger than ever with a record surplus.

"This allows the state to increase our reserves to more than $1.2 billion and increase our Medicaid trust fund as well to make sure we can continue our health care coverage for low income Arkansans," the Republican governor said Friday in a written statement.

"The most impressive part of the revenue report is that our individual income tax collections increased year over year despite lowering the tax rate to 5.9% at the beginning of the calendar year," Hutchinson said.

"This showcases the fact that a growing economy along with conservative management of our resources allows us to fund education at a high level and other state services and to cut taxes at the same time," the governor said.

In the past few months, Hutchinson has repeatedly said he plans to call a special session this fall for lawmakers to consider more income-tax cuts and his top priority is to cut the highest rate further.

Sen. Jonathan Dismang, R-Searcy, a co-chairman of the Legislature's Joint Budget Committee, said Friday that he and other lawmakers are working through the Bureau of Legislative Research to determine "what's the real economy," how much of the state's economic growth is inflated by federal stimulus payments, and how much in tax cuts the state can afford.

The April 2, 2020, forecast had predicted a covid-19-spawned recession that would dampen tax revenue.

The two largest sources of general revenue are individual income taxes and sales and use taxes.

Corporate tax collections for the fiscal year outdistanced the forecast by $202.5 million, or 45.1%.

The deadline changes matched what the federal government did.

In addition to two filing deadlines in the same fiscal year, payroll withholding revenue exceeded expectations during a faster rebound in the state's economy.

Sales tax and use tax collections beat expectations from the combined factors of economic rebound, federal stimulus payments and base growth in online marketplace sales, the finance department said.

Corporate tax collections are a volatile source of revenue, but they also beat expectations.

Tax refunds and some special government expenditures are taken off the top of total general-revenue collections, leaving a net amount that state agencies are allowed to spend.

On Wednesday, the final day of fiscal 2021, the finance department increased the net general revenue forecast by $212.3 million, to $5.89 billion.

That fully funded the $5.89 billion budget enacted in the April 2020 fiscal legislative session.

The $212.3 million increase in the forecast also allowed for an $86.6 million transfer to the Medicaid trust fund, and various state agencies, including public colleges and universities and the Department of Education, to carry forward a total of $101.6 million.

The remaining $24 million was transferred to a long-term reserve fund.

Boosting the net general revenue forecast by $212.3 million left a surplus of $945.7 million.

The surplus resulted from two main factors at the start of the pandemic and over the course of the fiscal year, said chief economic forecaster John Shelnutt.

"At the outset, national and state economic forecasts overestimated the size and shape of the pandemic recession, mostly out of concern for the shutdown aspects of businesses during the pandemic and the hit to consumer confidence," he said in a written statement. "The forecasts were not tuned for a pandemic with this mix of sector impacts and unknown duration of impact on the employment base."

The second factor was the scale and stepwise nature of federal stimulus programs during the year with uncertainty about their adequacy relative to the need, Shelnutt said.

"Arkansas benefited in both accounts from less shutdown impact on sectors and higher relative benefit of the stimulus transfers compared to our prevailing wages and cost of living," he said.

"If the pandemic recession could be classified as a natural disaster with quick rebound in the absence of underlying structural financial or valuation problems, then Arkansas had a faster return to trend growth across more sectors," Shelnutt said. "Consumers in Arkansas spent locally and online in place of travel, so that also shifted consumption patterns. Staycation became a new, unofficial spending category during the pandemic."

The $945.7 million surplus was combined with already accumulated surplus funds to boost the general-revenue allotment reserve fund to $1.1 billion, according to finance department records.

(On June 18, the Legislative Council signed off on the state Board of Finance's revised request for $35 million from the restricted reserve fund in fiscal 2022 for the health insurance plan for public school employees and 13 requests from Hutchinson to transfer $62.5 million out of the restricted reserve fund in fiscal 2022 to various state programs and projects. The state hasn't transferred that money yet, said finance department spokesman Scott Hardin.)

Under Act 1058, the remaining $991.7 million in surplus funds was transferred to the long-term reserve fund on Thursday to add to its previous balance of $209.9 million, and the fund totals $1.201 billion, according to finance department records.

Hutchinson has described the long-term reserve fund as the state's long-term savings account.

According to the finance department, June's general revenue included: