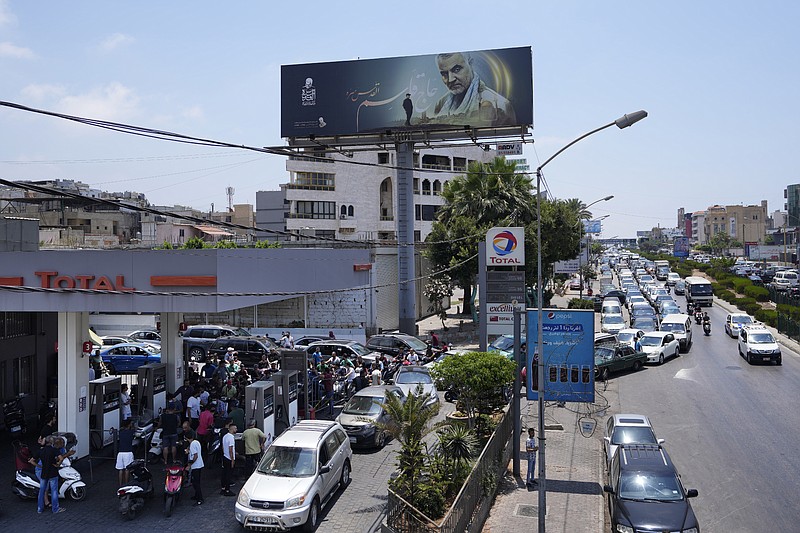 Drivers wait in a long line to get fuel at a gas station under a billboard showing Iranian Revolutionary Guard Gen. Qassem Soleimani, who was killed in Iraq in a U.S. drone attack in early January 2020, along the airport highway, in the southern suburbs of Beirut, Lebanon, Sunday, June 27, 2021. On Friday, Hassan Diab, Lebanon's caretaker prime minister, granted his approval to allow the financing of fuel imports at a rate higher than the official exchange rate, effectively reducing critical fuel subsidies that have been in place for decades, amid worsening gasoline shortages. (AP Photo/Hassan Ammar)

BEIRUT -- Lebanon's energy ministry last week increased gasoline and fuel prices by 35%, a move that could lead to a sharp increase in prices of most commodities in the crisis-hit country.

Lebanon is going through an unprecedented economic and financial collapse, coupled with a monthslong political deadlock over the formation of a new government.

The developments pose the gravest threat to the small country's stability since the end of its civil war three decades ago. The World Bank has said the crisis is among the worst the world has seen in 150 years.

Fistfights and shootings have erupted at some gas stations over the past weeks as frustrated citizens lined up for hours to fill up their tanks and the shortages have led to protests around Lebanon.

Electricity cuts last for much of the day, and people have had to turn off private generators for several hours to ration fuel. Last month the economy ministry raised the price of subsidized bread by 18%, the fifth time it was raised in a year.

The Lebanese pound hit a new low over the weekend, selling at 18,000 pounds to the dollar on the black market. The pound has lost more than 90% of its value since the crisis began with nationwide protests against the country's political class in late 2019.

There was a temporary relief from the country's power supply shortages. Recently, a Turkish company that provides electricity to Lebanon from two power barges said it will resume supplies. The move comes six weeks after it shut down operations over delayed payments and the threat of legal action against its vessels.

The decision by Karpowership is expected to increase electricity supply by about four to six hours a day.

"This is a goodwill gesture," Karpowership said in a statement to The Associated Press. It said it is still looking for a solution with Lebanese authorities to outstanding payments.

Karpowership had said it is owed 18 months of overdue payments totaling in excess of $100 million. Last month, a Lebanese prosecutor threatened to seize the ships, pending an investigation into corruption and graft allegations. The company has called those accusations baseless.

The crisis, rooted in decades of corruption and mismanagement, has worsened in recent weeks with the central bank cutting back on financing imports at subsidized dollars. Foreign currency reserves have dropped dangerously low, from $30 billion at the start of the crisis, to nearly $15 billion currently. That has prompted merchants to either raise prices or stop imports.