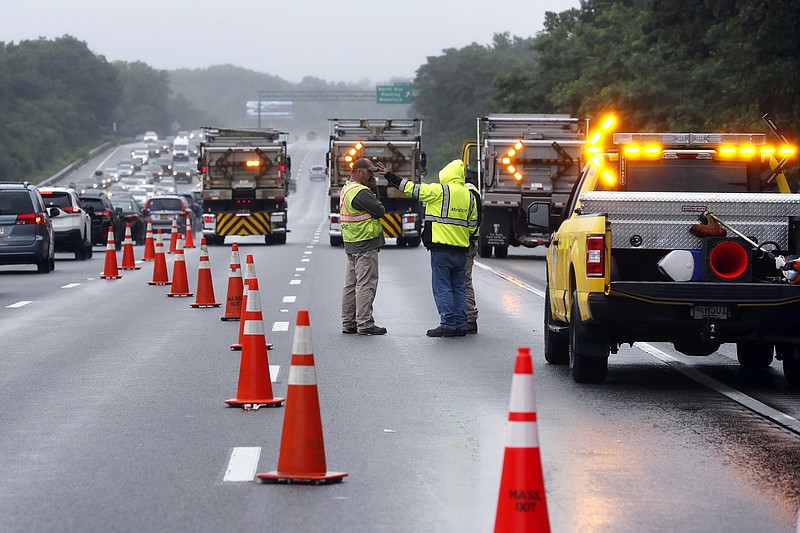 Traffic on Interstate 95 is diverted in the area of an hours long standoff with a group of armed men that partially shut down the highway, Saturday, July 3, 2021, in Wakefield, Mass. (AP Photo/Michael Dwyer)

MEDFORD, Mass. — Some of the 11 people charged in connection with an armed standoff along a Massachusetts highway last weekend, including the purported leader of the group, refused to cooperate with court authorities during their arraignments Tuesday.

Jamhal Tavon Sanders Latimer, 29, also known as Jamhal Talib Abdullah Bey, told the judge "I don't understand how these charges can be brought against me."

Latimer, a former U.S. Marine from Providence, Rhode Island, waived his right to an attorney, but the judge said she would have a lawyer speak to him about this rights before the next hearing in the case.

Not guilty pleas were entered on behalf of all the defendants, who were held without bail pending a hearing Friday to determine whether they are dangerous.

The first to appear, Quinn Cumberlander, 40, of Pawtucket, told the judge in a courtroom with a heavy security presence he was a "foreign national" who cannot face criminal charges, and said he did not want a defense attorney.

Cumberlander invoked his Second Amendment right to bear arms, said the case should be heard in federal court, and said he meant no harm.

"We didn't want to cause fear. I object to being held without bail. I am not a threat to society or anybody," he said in court.

Another defendant, Robert Rodriguez, 21, of the Bronx, New York, asked that a fellow defendant serve as his attorney but the judge noted the man is not a licensed lawyer.

He also refused to be interviewed by Probation.

"I was seen by a probation officer," Rodriguez said. "But I did not commit a crime."

A third defendant, who has refused to identify himself to authorities, told the judge he was a "free Moor."

The judge ruled he had waived right to counsel, then ordered him out of the courtroom to watch proceedings on Zoom because he kept interrupting her.

The defendants, 10 men and a 17-year-old juvenile, say they are members of a group called Rise of the Moors. Several of their supporters were also in court, while others watched remotely, sometimes interrupting.

They face several charges including unlawful possession of a firearm and ammunition and the use of body armor in commission of a crime, in connection with the standoff that started early Saturday morning on Interstate 95 in Wakefield.

The standoff began when a State Police trooper stopped to offer assistance to the vehicles he found on the side of the highway that were refueling.

The men, who were dressed in military fatigues and body armor and were armed with long guns and pistols, did not have licenses to carry firearms in Massachusetts, police said.

They told police they were traveling from Rhode Island to Maine to conduct what they called "training."

Some of the defendants ran into the woods along the highway, leading to a standoff that lasted several hours and prompted the closure of the busy highway on a holiday weekend.

The vast majority of Moorish sovereign citizens are African American, according to the SPLC.

On the Rise of the Moors website, however, they say they are not sovereign citizens, but the original sovereigns of the U.S. based on a 1789 letter from George Washington to the sultan of Morocco.

They are from Rhode Island, New York and Michigan.