Emphasis on information instead of mass vaccination clinics by The Associated Press | July 6, 2021 at 2:00 a.m. 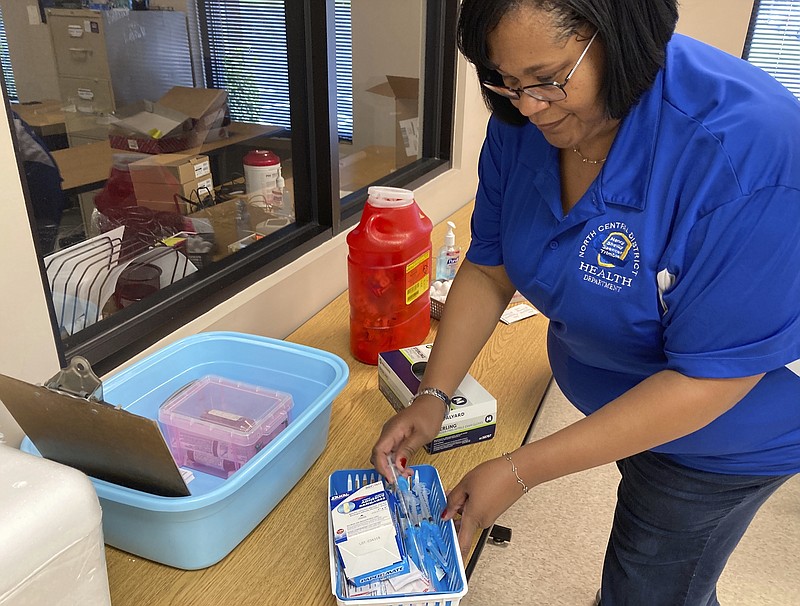 TAYLORSVILLE, Ky. -- John Rogers waited months after becoming eligible for the covid-19 vaccine. It was only after talking with friends that the 66-year-old retiree from rural Spencer County, Ky., was persuaded to get the shot.

With the nation falling just short of President Joe Biden's goal of dispensing at least one shot to 70% of all American adults by the Fourth of July, public health officials in places like Spencer County have shifted the emphasis away from mass vaccination clinics, and toward getting more information out in a more targeted way about the benefits of getting inoculated.

Health departments have offered the vaccine at concerts, parades and fairs, and plan to make it available at back-to-school events. They have encouraged local doctors to raise the issue with patients and promoted shots by way of printed materials and social media.

The hope is that word of mouth will ease fears and misperceptions about the vaccine and change people's minds, one person at a time if necessary.

That's especially important in places like Spencer County, an area of rolling green hills and farmland southeast of Louisville, where the state reports that about 22% of eligible adults are at least partially vaccinated. Public health officials there think the numbers are improving.

Biden administration officials are increasingly turning their attention nationwide to some 55 million unvaccinated adults seen as persuadable, a group they have dubbed the "movable middle."

Many of those being targeted are younger than 30, an age group that has an especially low vaccination rate. But they also include people like Rogers, who said many people in his community are hesitant to get shots because "they just don't trust the government."

Rogers, who worked for a packaging supplier in nearby Shelbyville, said he shook off the skepticism and is now looking forward to a summer of "things going back to normal as they can be."

Nationally, resistance to getting vaccinated tends to run higher in conservative and rural parts of the country. Overall, 49% of all Kentuckians have received at least one dose, compared with about 55% nationwide.

Stephanie Lokits, who oversees vaccination efforts in the county for the public health department, has watched immunizations slow since a peak in March, when clinics drew hundreds of residents. Now only 10 to 20 trickle through a weekly vaccine clinic held in the county seat of Taylorsville, a town of 1,600 with an old theater, a courthouse, some empty storefronts and a few small businesses slowly finding their way out of the pandemic.

While Kentucky has seen a decline in cases in the past seven weeks, nearly all confirmed infections and deaths reported in the past month have been in unvaccinated residents.

"I think that the philosophy that we have really tried to go by is that every single shot that we can get administered to a person is a positive thing," Lokits said. "I think that's kind of the place where a lot of health departments and a lot of providers are at."

Lauren Slone, a nurse practitioner leading the vaccine effort at a community health center in Taylorsville, said she has learned through conversations with her patients that misconceptions about long-term effects pose real problems.

She has found that most people she talks to eventually get vaccinated. The challenge, she said, is "getting people to talk to me about it in the first place."

While appointments in the center aren't filling up as quickly as she would like, Slone thinks an effort to distribute information at local middle and high schools led to more vaccine appointments.

"I thought, you know, one way to get adults in is when teenagers know about it," Slone said. "If your teenager asks to get it, then maybe that encourages you a little bit as well."

A June drive-thru clinic held after the information push was well-attended by young adults. That's another good sign, Slone said. Only one-third of Kentuckians 18 to 29 have received at least one dose of a vaccine, compared with 83% of residents 65 and older.

Still, getting the word out can be harder in a rural county, because some residents aren't on social media or don't have consistent access to the internet. And in spread-out, sparsely populated places like Spencer County, some people may not feel the need to get the vaccine as quickly, said district health department director Roanya Rice.

Also, Spencer County has lower cases per-capita than neighboring counties and the state as a whole, meaning the threat can seem far away to some.

Rogers, now fully vaccinated, is enjoying the freedom to take off his mask for good, eat at a restaurant or visit with relatives without worrying.

"I waited a long time," he said. "I should have gotten it a long time ago."

Hudspeth Blackburn is a corps member for the Associated Press/Report for America Statehouse News Initiative, a nonprofit national service program that places journalists in local newsrooms to report on undercovered issues. 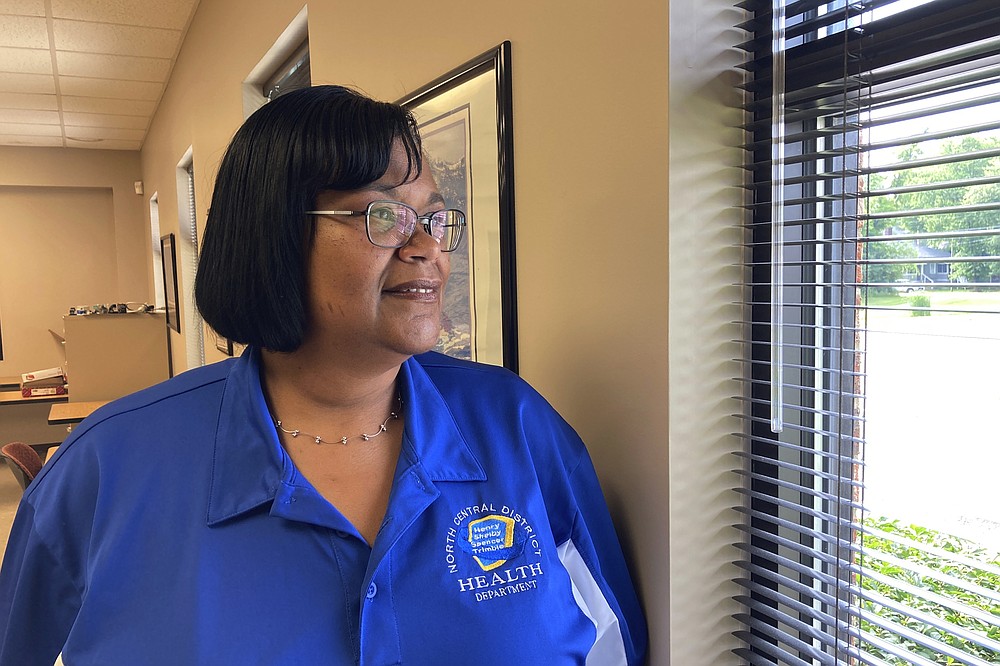 Roanya Rice, public health director for a cluster of rural Kentucky counties, poses for a photo at her office in Shelbyville, Ky., on Friday, June 18, 2021. In spread-out, sparsely populated places like Spencer County, some residents may not feel the need to get the vaccine as quickly, said Rice. (AP Photo/Dylan Lovan) 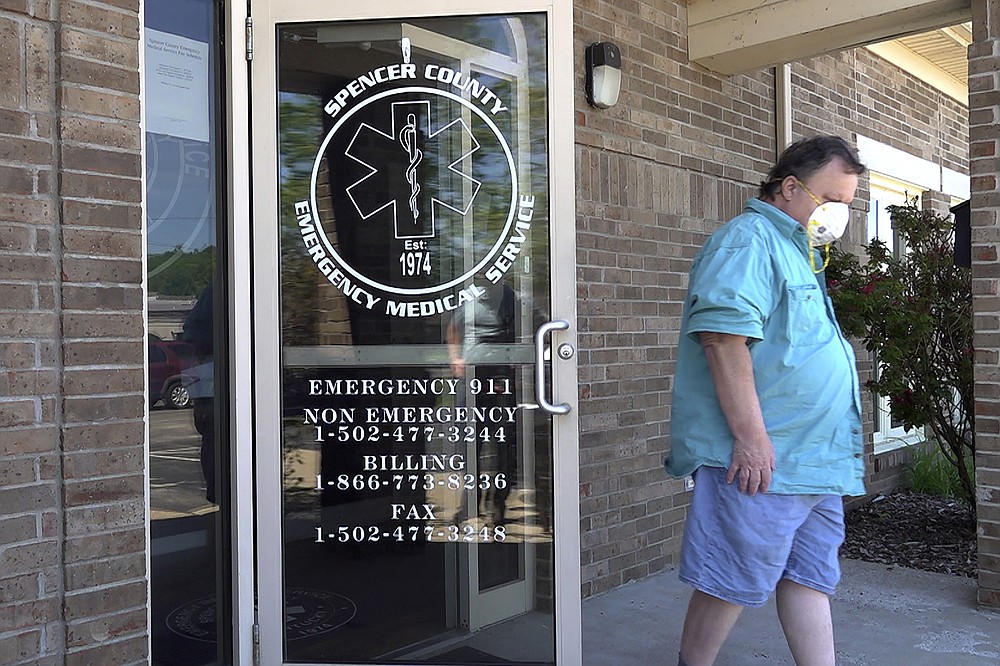 A visitor to a clinic leaves after receiving a COVID-19 vaccine in Taylorsville, Ky., on Thursday, June 17, 2021. With the U.S. falling short of President Joe Biden’s goal of having 70% of all American adults at least partially vaccinated by the Fourth of July, public health officials have shifted the emphasis. (AP Photo/Dylan Lovan) 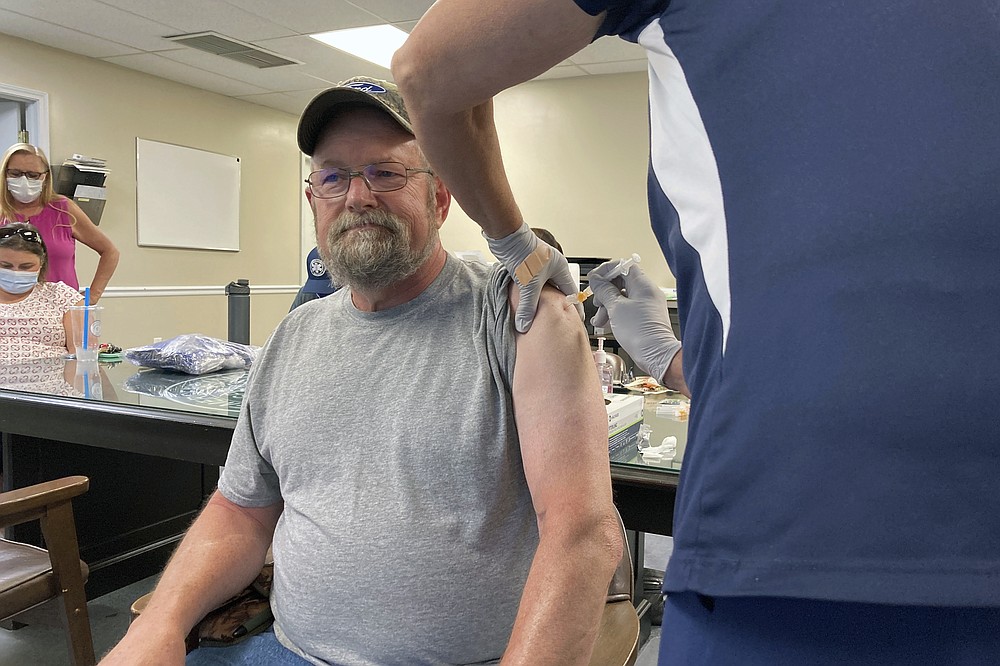 John Rogers receives a second dose of the COVID-19 vaccine in Taylorsville, Ky., on Thursday, June 17, 2021. Rogers waited months after becoming eligible for the COVID-19 vaccine. It was only after talking with friends that the retiree was persuaded to get the shot. “They said, ‘You know, the vaccine may not be 100%, but if you get COVID, you’re in bad shape,'" Rogers said. “You can die from it." (AP Photo/Dylan Lovan)