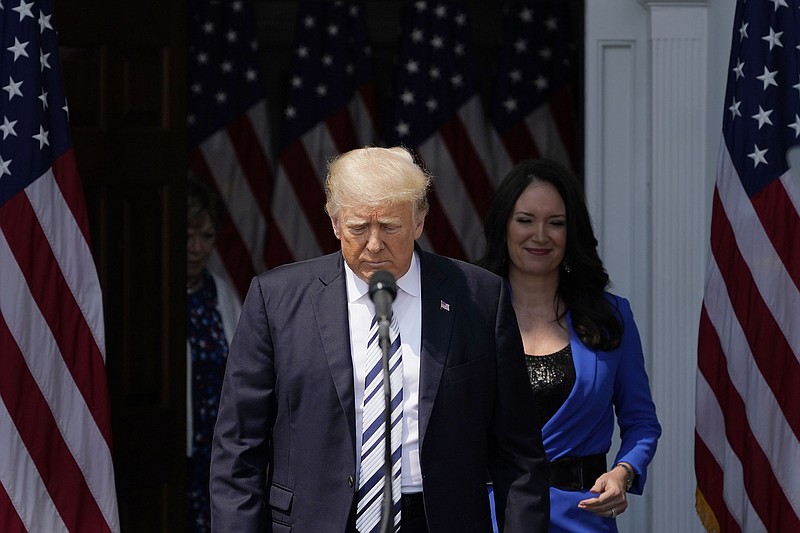 Former President Donald Trump on Wednesday filed class-action lawsuits targeting Facebook, Google and Twitter, escalating his long-running battle with the companies after their suspensions of his accounts.

Trump announced the action against Facebook, Twitter and Google's YouTube, along with the companies' leaders, at a news conference Wednesday in New Jersey, where he demanded that his accounts be reinstated.

"We're demanding an end to the shadowbanning; a stop to the silencing; and a stop to the blacklisting, banishing and canceling that you know so well," Trump said.

[Video not showing up above? Click here to watch » https://www.youtube.com/watch?v=A5x2xzTQ40s]

Trump has been suspended from the platforms since January, when his followers stormed the Capitol building, trying to block Congress from certifying Joe Biden's presidential win. The companies cited concerns that Trump would incite further violence and have kept him locked out. All three declined comment Wednesday.

Despite criticism from legal experts who predict they have little chance of succeeding, the lawsuits, filed in federal district court in Miami, raised a series of legal claims that will find favor among Trump's most fervent supporters, who have long argued that the social media companies treat conservative voices unfairly.

The lawsuits also called for the court to strike down Section 230, a decades-old law that protects tech companies from lawsuits over content-moderation decisions.

While conservatives often claim the sites are biased against them, several recent studies have found that isn't the case. Indeed, posts by conservative commentators such as Ben Shapiro, Franklin Graham, Dan Bongino and Dinesh D'Souza are routinely among the most widely shared on Facebook.

Paul Barret, the deputy director of the New York University Stern Center for Business and Human Rights, said the lawsuits were dead on arrival.

"Trump has the First Amendment argument exactly wrong," he said in a statement. "In fact, Facebook and Twitter themselves have a First Amendment free speech right to determine what speech their platforms project and amplify -- and that right includes excluding speakers who incite violence, as Trump did in connection with the January 6 Capitol insurrection."

The Florida law, District Judge Robert Hinkle wrote, would likely be found unconstitutional because it "compels providers to host speech that violates their standards."

Legal experts said Trump's claim that the companies should be considered "state actors" also is unlikely to succeed.

The lawsuits mark the latest chapter in Trump's tumultuous relationship with the social media companies, which helped fuel his political rise and served as critical megaphones during his presidency until the platforms suspended his account, citing incitement of violence, in the aftermath of the Jan. 6 attack on the U.S. Capitol. Since then, Republicans have been escalating their political attacks on the Silicon Valley giants, accusing them of censorship.

In the lawsuits, Trump argues that the companies were "working directly with government actors to censor free speech." He cited as evidence of Facebook's ties to the government its restrictions on claims of widespread election fraud during the 2020 election and its removal of misinformation about hydroxychloroquine being a cure for covid-19.

The lawsuits also said Facebook was intimidated by Democratic lawmakers' threats to regulate social media amid an onslaught of falsehoods about the pandemic and the election.

Szabo called the lawsuit "a rewrite of history," noting that Republican lawmakers and Trump himself often threatened to regulate the tech companies. "It just seems like this is an 'It's OK if I do it; it's not OK if other people do it,'" Szabo said.

Jessica Melugin, director of the Center for Technology and Innovation at the libertarian group Competitive Enterprise Institute, in an emailed statement called the lawsuit a "publicity stunt."

"These social media platforms are private property, not the government town square, and are well within their First Amendment rights to refuse to carry speech of third parties," she said.

Twitter in January permanently suspended Trump's account, citing the risk of further violence in the wake of the Capitol riot. Facebook has suspended the former president for two years and has said it will only reinstate him if "the risk to public safety has receded."

Trump has had a significantly smaller online reach since then. He recently shut down his blog after just 29 days after reports by The Washington Post and other outlets highlighting its underwhelming traffic.

"Of course there's no better evidence that Big Tech is out of control than they banned the sitting president of the United States earlier this year," he said at the news conference. "If they can do it to me, they can do it to anyone."

"Digital services have a right to enforce their terms of service," association President Matt Schruers said in a statement. "Frivolous class action litigation will not change the fact that users -- even U.S. Presidents -- have to abide by the rules they agreed to."

Even before the bans, Trump railed against social media companies, accusing them of censoring him and other conservatives. In May 2020, he signed an executive order that took aim at Section 230. Biden revoked that order in May.

Trump also rallied his online allies at a "Social Media Summit" at the White House two years ago, where he railed against the tech companies for exhibiting "terrible bias" and silencing his supporters. That same year, the Trump administration launched a campaign to collect stories of alleged instances of political bias on social media.

Meanwhile, House Republicans on Wednesday also stepped up their attacks on technology companies amid a bipartisan push to overhaul U.S. competition laws. Republican members of the House Judiciary Committee released a plan calling for an overhaul of Section 230 and faster court consideration of antitrust cases.

Information for this article was contributed by Cat Zakrzewski, Rachel Lerman and Josh Dawsey of The Washington Post; and by Jill Colvin, Matt O'Brien and Mae Anderson of The Associated Press.