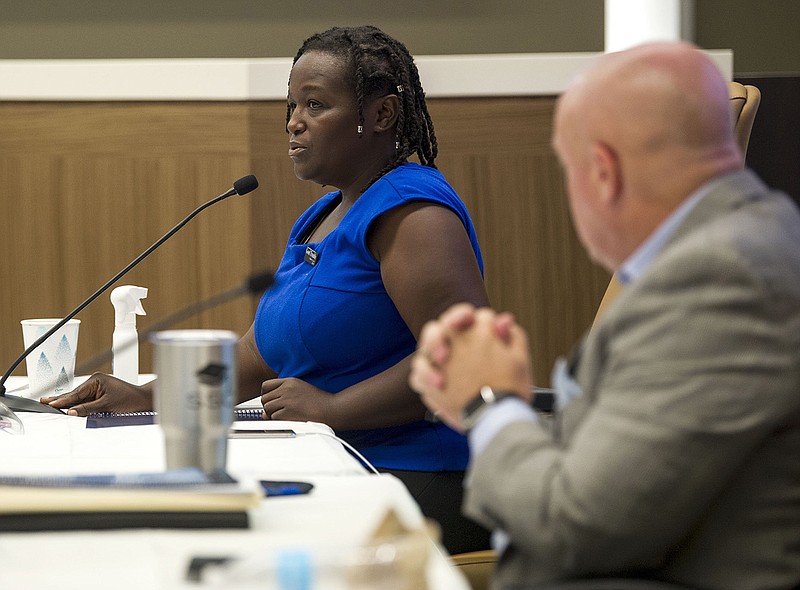 Little Rock School District leaders Friday put the construction of a west Little Rock high school on a draft list of projects to possibly be funded with proceeds from a voter-approved property tax extension.

The board and its financial advisers held the morning work session in preparation for a decision by mid-August on what the facility priorities are in the district and whether to ask voters to approve a 19-year extension of the 12.4-mill tax for debt service in an election later this year.

District leaders are considering a Nov. 2 election on the plan to continue the tax levy from 2033 -- when it is to expire -- to 2052. An extension of the district's 12.4 debt service mills would not increase annual taxes for individuals, but the taxes would have to be paid over more years.

On Friday, district staff and board members discussed the possibility of bond issues of as much as $300 million to be financed by the extended debt service tax mills.

Superintendent Mike Poore told the board that the district's top facility priority is building a kindergarten- through-eighth grade school on the vacant McClellan site to replace Cloverdale Middle and Baseline and Meadowcliff elementaries. A new elementary/middle school, estimated at $85 million, is a provision in a settlement of a federal court lawsuit against the district.

Other "must do" projects on the district's draft list include security camera upgrades at elementary schools, LED lighting, window replacements -- particularly at Dunbar Middle and Central High -- renovations at Central, Parkview and Hall high schools and West School of Innovation; and roof replacements at 10 schools. The priority projects total an estimated $127 million.

West Little Rock residents have lobbied and pleaded for years for a high school that could serve students in the Roberts Elementary and Pinnacle View Middle School in the city's growing northwest section.

"I'm at a place where I really think we need to give consideration to building a campus there," Poore said, adding that a high school in the fast growing northwest section of the city could help the district increase its enrollment.

"I don't know for how many students -- that's the talk and the discussion that begins today," Poore said of a campus.

School Board member Jeff Wood, who represents the northwest zone in the district, welcomed the proposal and urged that a high school campus be a world-class facility of 1,400 to 1,500 students that can compete with other public and private schools in the area. He urged that the district find a way to use 40 undeveloped acres owned by the district to the east of Pinnacle View.

"West Little Rock is starving for traditional public education to be nearby," Wood said.

An election on continuing the levy would be the third time the district has taken the measure to voters. Very similar measures were defeated last November and in May 2017.

In both cases the district was operating under state control or at least state restrictions. The 21,000-student district has been released from state management and restrictions.