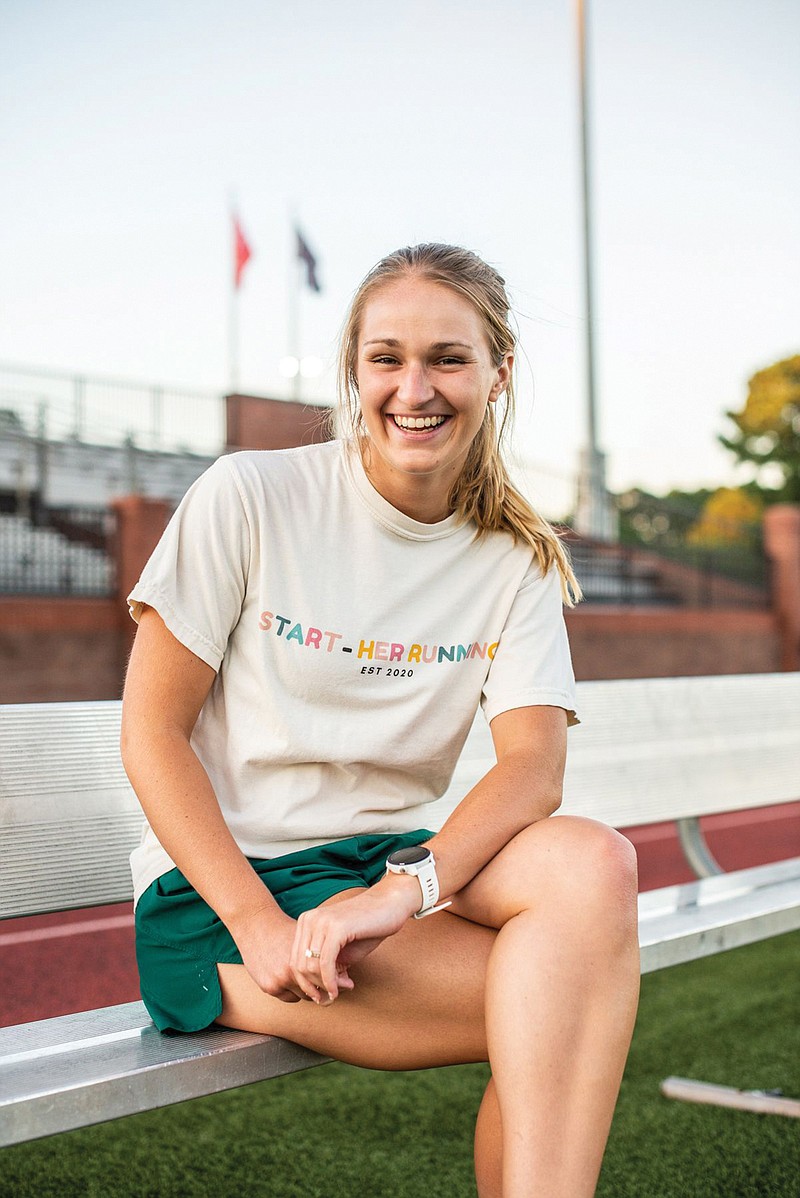 For Eden Henderson, a senior at Harding University in Searcy, running has always been a daunting activity in her mind.

“I have always been a person who felt like I am not capable of doing things that are physically challenging,” Henderson said. “And over my life, I have built a brick wall in my mind, but each time that I run now, I am slowly taking down the wall, brick by brick.”

In January, Henderson was introduced to Layne Turley and her Start-Her Running Co., a Searcy-based running company that creates personalized running plans for women.

“I have been running with Layne’s plan and having her encourage me,” Henderson said. “I have gained this mentality that I can run longer distances, and it has not only helped me physically, but it has also helped improve my mental strength.”

Turley started running when she was in the fourth grade after she saw her mom cross the finish line at a marathon.

“Running was a great outlet for me, and I ran in junior high, high school and into college,” she said. “While in school, I was taking a business class at Harding, and we had a guest speaker who was talking about her business, and it gave me an idea to find something that I am passionate about — which is running.

“I have learned to enjoy the sport, but there is so much more to it than the hard and painful feelings that go alongside it.”

She said her business trains women “to run with a passion and a purpose, not to just look better, but to run for themselves, run with their inner spirit and just be a better person.”

Turley started her business in April 2020, when she was a sophomore at Harding.

“I was studying abroad my second semester, and I had to come back to Searcy due to the COVID-19 pandemic,” she said. “I had two months on my hands, so I wanted to make this dream a reality.

“I started Start-Her and immediately started getting clients. I offered a variety of training programs, and I would send them to athletes. Everything was virtual, so I was sending packets to athletes who were at home and thought this was the perfect time to get started and get into better shape.

“I really had an overwhelming response.”

Henderson and Turley attend college together and have been friends since they were both freshmen. Henderson said she was really hesitant to begin running.

“I started [Layne’s] training at the beginning of this past spring, and I will continue on her training plan until I run the St. Jude Half Marathon in Memphis [in December],” Henderson said.

Turley said she has trained close to 100 athletes over the past year. She said she has people who come in, train for a particular race, then leave.

“My goal is not to keep a client for a long time,” she said. “I want to teach them the basics, help them and guide them, and send them on their way.

“That is kind of what I have been doing.”

Turley said she has not only helped women in Searcy, but also Florida, California and Wisconsin.

“When I started, I wanted to cater specifically to women, and we carry a lot of baggage when it comes to exercise, so I decided I would specifically hone in on women,” she said. “I have coached a few guys, but I mostly target women.”

Mieka Pratt, who graduated from Harding about 2 1/2 years ago but still lives in Searcy, heard about Start-Her through a good friend. Pratt has been training with Turley since January.

“It has been helpful because it is not about speed,” Pratt said, “but it is more about enjoying the sport of running, which I have come to enjoy more.”

Pratt said she has been a pretty active runner for about seven years, since her junior year of high school at Central Arkansas Christian in North Little Rock.

“I felt better after running the race and felt comfortable at the pace I was running. I was more at ease than in any other race I had trained for.”

Turley will be a senior at Harding this fall, and when she finishes school, she will have a bachelor’s degree in marketing, as well as a Master of Business Administration degree. She has a run-coach certification from the Road Runners Club of America.

“I was overwhelmed by the amount of support that I received from my peers and my community,” she said. “People latched onto it quickly, and to see it spread was really cool — to watch that ripple effect.

“I was very shocked by how well it took off.”

Turley is originally from Searcy, having graduated from Harding Academy. She and her husband, Travis, married in May.

“In order to keep growing as a human, we need to set goals for ourselves and challenges for ourselves,” she said. “I love running and laying out those small challenges, just to develop who you are.

“Running has been therapeutic because I am able to think and process what is going on in my life. There have been moments when I have stopped and cried and connected with the Lord and prayed.”

Turley said running brings up new emotions that she didn’t know were there.

“When you are on the trail by yourself, it is just you and God. It is really a beautiful place to just let everything else go,” she said. “When I catch myself running for the wrong reasons, that’s when it becomes miserable. That’s when I start to hate it.

“I am truly passionate about it, and I have a found a way to connect with myself and connect with the Lord through it.”