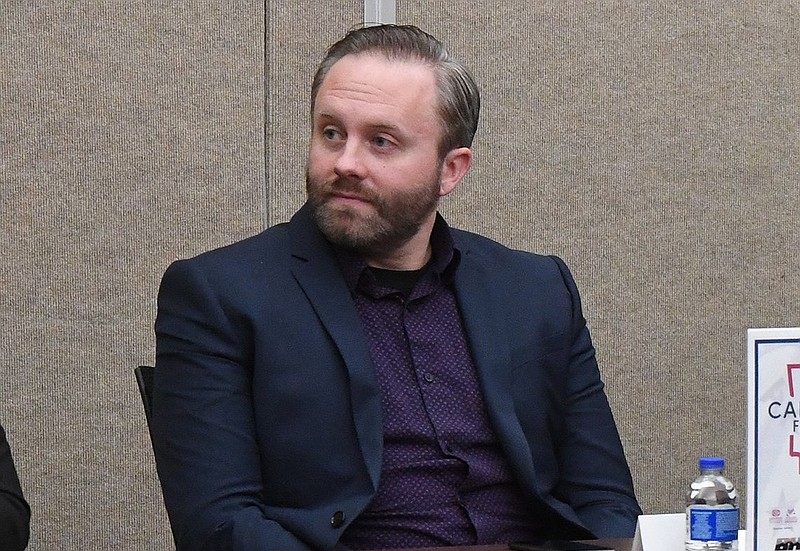 Chris Latimer of Rogers knew which doors to knock on in his debut campaign for the state House last year, but he didn't do it because of the covid-19 pandemic.

Now he can more safely knock on any door he wants to if he pursues a campaign plan, but he's not sure which doors will be in his House district.

Everyone seeking office in the 2022 election is in the same situation.

"It's a little interesting," Latimer said with a laugh.

Delayed data from the 2020 U.S. census is the culprit.

Northwest Arkansas could gain three or more state House seats before the next election, local lawmakers estimate, along with at least one state Senate seat.

District lines get redrawn after each U.S. census. Census Bureau estimates show that Northwest Arkansas gained population while it declined in other areas of the state. So, the state's northwest will gain seats while other parts of the state lose some seats or hold steady. The 100 House districts and 35 Senate districts are redrawn with the goal of equal population in each.

Drawing district boundaries requires detailed census data and maps showing where people live. The difficulties of census-taking during the pandemic, along with court battles over attempts to include citizenship status on census questions held up the tally for months.

The latest plan from the U.S. Census Bureau is to send some data to states by mid-August.

The best guess now for the first maps on redrawn legislative boundaries is sometime by the end of November, said Kevin Niehaus, a spokesman for the Arkansas secretary of state's office. Redrawn districts require approval by a board consisting of the governor, the attorney general and the secretary of state.

The timeline may look ample before filing for office begins Feb. 22, but it's not, Niehaus said.

County election officials will be in a bind to get registered voters assigned to the right voting precincts in the right districts, he said.

Political campaigns require planning too, potential and former candidates said. The earlier someone decides to run and plans for it, the better off he is, they all said.

"There's a big question mark over everything at this point. I'm definitely interested in running, but I'm not going to run against Kendon if we're in the same district," Latimer said, referring to incumbent, first-term Rep. Kendon Underwood, R-Rogers. Underwood was the winner in Latimer's race, and the two became friends during the campaign, Latimer said.

"The situation definitely favors incumbents," Underwood said of the uncertainty of district boundaries, adding to the normal advantages of incumbency such as name recognition.

"I wouldn't say it's impossible to defeat an incumbent" without certainty about district borders, he said. "I can tell you that you have very limited resources, and you have to use them very efficiently to win a race like that."

The prevailing uncertainty about boundaries makes efficiency much harder, he said.

"Whatever happens to my district, I have to represent all the people in it now," Underwood said, adding that he does not allow the thought of whether a constituent may not be a voter in his next election enter his mind.

Most incumbents likely will have the same core constituencies in their new -- and in the Northwest, smaller -- geographic districts, but that is not guaranteed, said Rep. Denise Garner, D-Fayetteville.

"I live at the very edge of my district," Garner said. "I could easily be drawn out of it. So I don't know if I'm in or out.

"Colleagues of mine are already holding campaign kickoffs and are holding fundraisers, but I don't feel like I'm in a position to do that," she said.

Adrienne Woods was appointed to the state Board of Education after her unsuccessful primary bid for a House seat in Rogers in 2020. She has no intention of running next year because she will continue to serve on the board, she said.

Candidates can make at least an educated guess of voters likely to be in the same House or Senate district, Woods said.

The covid pandemic strained local business -- including hers, Woods said. She is co-owner of Freeride Studio, a fitness club in Bentonville, a sector hit particularly hard by the pandemic, she said.

Business people will be vitally concerned with any tightening or easing of state requirements, regulations, taxes or any number of other issues dealt with by the Legislature, she said.

The Legislature could postpone next year's candidate and election deadlines in light of census delays.

The Legislature is to reconvene after detailed census data is released to redraw congressional district lines. The state Board of Apportionment -- the governor, attorney general and secretary of state -- approves state district boundaries, but the Legislature draws boundaries for the state's four-member delegation to the U.S. House.

The Legislature could change filing times and other dates for state elections, and there has been some discussion of that, Niehaus said.