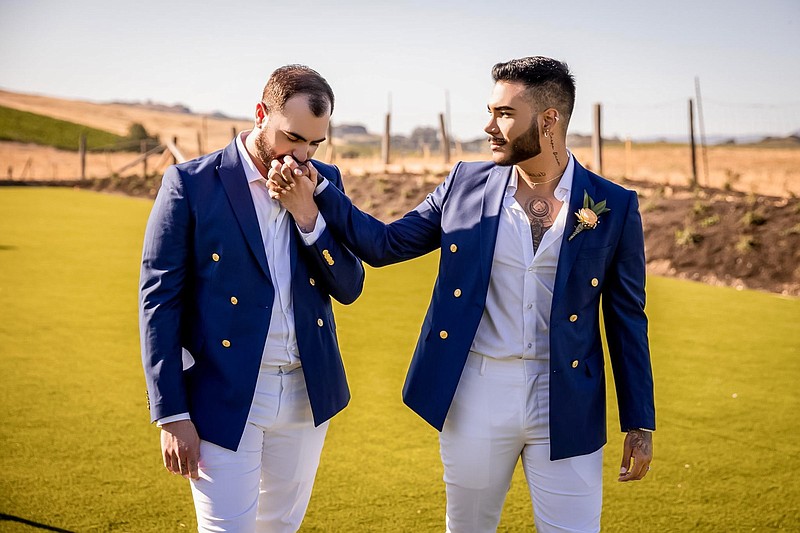 Michael DeSalvo Solarte (left) and his husband Alejandro Solarte DeSalvo celebrate their wedding June 25. The couple had postponed plans to marry until 2022 but won a trip to be married at Carneros Resort and Spa in California's Napa Valley through the nonprofit Visit California. (Special to the Democrat-Gazette/Max Whittaker)

June 25 turned out perfectly for Alejandro Solarte DeSalvo and Michael DeSalvo Solarte. It was their wedding day, and the couple exchanged vows at Carneros Resort and Spa in California's Napa Valley surrounded by vineyards and rolling hills.

Like a lot of couples during the pandemic, Alejandro and Michael weren't sure about wedding services.

They were living in New York, where Michael worked in the city's Office of Management and Budget under Mayor Bill de Blasio and Alejandro worked at a restaurant.

"He had this big thing planned, but covid hit and we were all quarantined," Michael, 27, says. "But he decorated the apartment and there were candles everywhere and his family and my family helped plan it."

They were thinking about a small wedding for a few months later, but weren't sure how things would go with the virus rampant and vaccines not ready.

"We didn't feel comfortable having our families around if they hadn't been vaccinated," Michael says, "so everything was really just up in the air. We couldn't do anything."

They decided to hold off until February 2022 and have the ceremony and reception in Little Rock, where Michael grew up and where they now live. Michael is a program associate at the Winthrop Rockefeller Foundation, and Alejandro works in the beauty industry.

But Alejandro had another idea.

A few months ago while scrolling online, he found a contest called Dreaming On in California, which was sponsored by nonprofit marketing firm Visit California and aimed at people who had postponed celebrations in 2020.

"I put my name down and told the story about us, and I figured I'd never hear from them," Alejandro says.

Ah, but he did. On June 1, which was also his 24th birthday, Alejandro received an email from Visit California telling him they were one of 10 couples chosen to have their weddings at Carneros Resort and Spa. Alejandro and Michael paid for their plane tickets to San Francisco, and everything else was paid for by Visit California, they said.

Of course, there wasn't a lot of time to prepare.

They found some spiffy suits, booked their flight and jetted to California.

After a couple of days in San Francisco they drove to Napa Valley, where they stayed for two days while their wedding plans were handled.

"There really was no stress," Michael says. "Visit California planned every little detail." 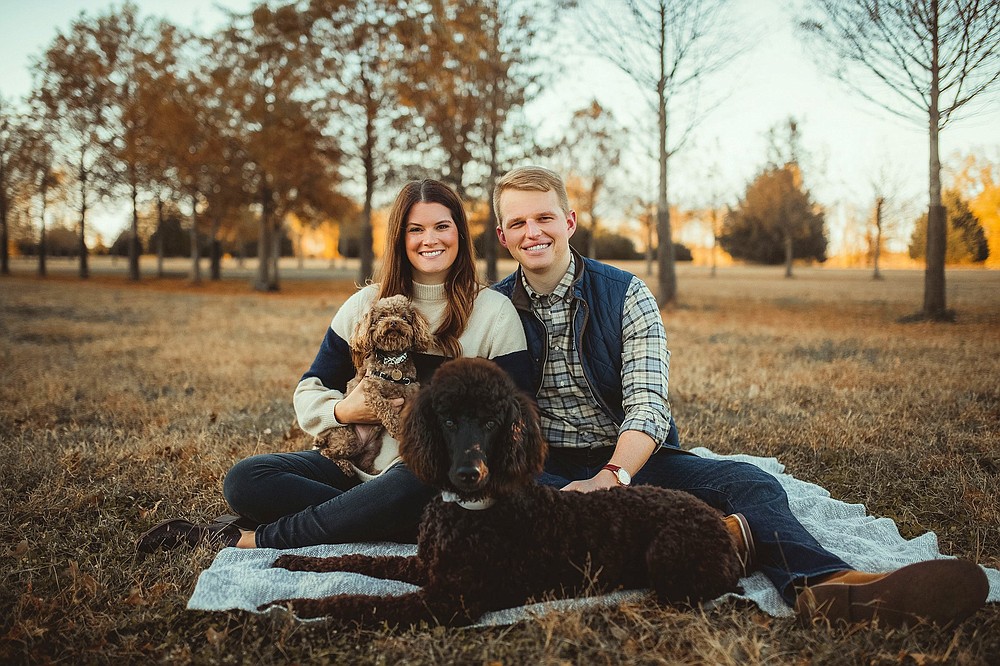 With dogs Bear (left) and Phoebe, Reagan Muse and Dr. Cody Timmermann enjoy a fall outing in 2020, while their wedding plans were on hold because of the pandemic. (Special to the Democrat-Gazette/Wallace Lee)

"It was such a beautiful experience," Michael says. "We were treated like family, and everyone was super friendly. The officiant was so sweet and kind."

The ceremony was streamed live on Zoom so their families could watch.

"The weather was perfect and sunny and it wasn't too hot," Michael says. "We said our vows and the officiant said some beautiful words, and that was it. It was amazing."

They met in 2012 as freshmen at the University of Arkansas, Fayetteville, and got engaged in March 2019.

The plan was to just sort of propose nonchalantly, says Cody, a resident physician in internal medicine at the University of Arkansas for Medical Sciences.

"The motivation behind that is that Reagan is kind of mischievous, so I just acted like this was no big deal."

Of course it was a big deal, and he'd secretly planned a party that evening for her at her parents' home in North Little Rock.

"That was a nice surprise," says Reagan, a registered nurse at CARTI.

The pair, both 27, set a wedding date of May 9, 2020, and worked with Little Rock wedding coordinator Shelia Vaught.

"With wedding planning, once you book your date you can just kind of unfold everything else," Reagan says. "Everything kind of lined up about three months after the engagement. We were just ticking the boxes."

And then, well, you know.

"The shutdown happened [in March 2020] and covid was becoming more of a thing to be concerned about," Reagan says.

The Centers for Disease Control and Prevention initially had an eight-week shutdown window that would have ended May 8, the day before their planned wedding.

"Between March, when it all melted down, and sometime in April, we were gonna keep trucking along," Cody says. "We weren't going to have everything we wanted, but we knew we wanted to go ahead and do it."

Reality began to set in, though, and it was obvious that a large gathering would not be wise. At Vaught's urging and out of concern for their guests' health, they pushed their date forward a year.

"We just decided it was safer," Cody says.

But it wasn't easier.

"It was very much the unknown," Reagan says. "The hardest part was getting vendors and all the little things you don't think about, and having to coordinate those dates. You lose things you thought you originally had because of the date change, but our vendors were very understanding. It must have been a really frustrating time for them." 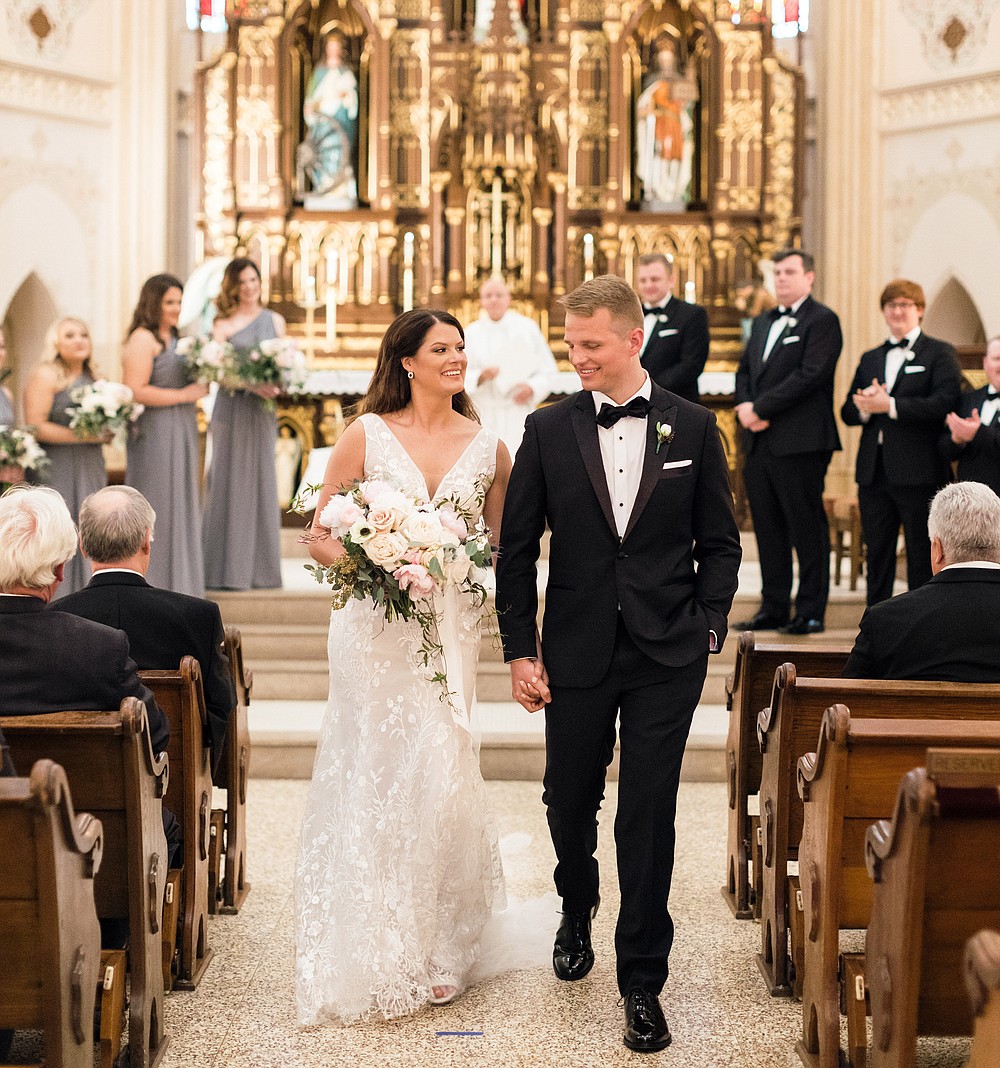 Reagan and Cody Timmermann married on April 24, 2021, at St. Edward Catholic Church with vaccinated family and friends in attendance and masks available for everyone. (Special to the Democrat-Gazette/Lela and Lyla)

Even by February 2021, with the wedding a month away, they still hadn't secured a reception venue. They thought they might have to resort to an outdoor setting with tents, but Vaught came through and reserved the Country Club of Little Rock.

"She had an event moved from that date," Reagan says.

Vaught has been planning weddings in Little Rock for 25 years.

"I ended up having to reschedule about seven or eight weddings last year," she says. "Some of them got rescheduled more than once, which was really challenging."

Vaught recommended couples not compromise on their dream wedding but hold off until it was safe, though at the time there was no way of knowing if that would be in six months, a year or longer.

"I tried to express to them that they could wait so they could still have the wedding of their dreams," she says.

She helped reschedule venues, florists, photographers, caterers, bands, DJs -- the intricate "jigsaw puzzle" of people that has to be pieced together for any large wedding.

One bride, she says, went ahead with a smaller service in 2020 when churches opened up to 50 attendees and had her reception a year later on her first anniversary.

"I did a few last year, but I was not comfortable," she adds. "After we did a couple, we decided we weren't going to do it anymore. Thank goodness, my brides rescheduled."

Cody and Reagan were married April 24 at St. Edward Catholic Church with family and friends in attendance and masks available for everyone. 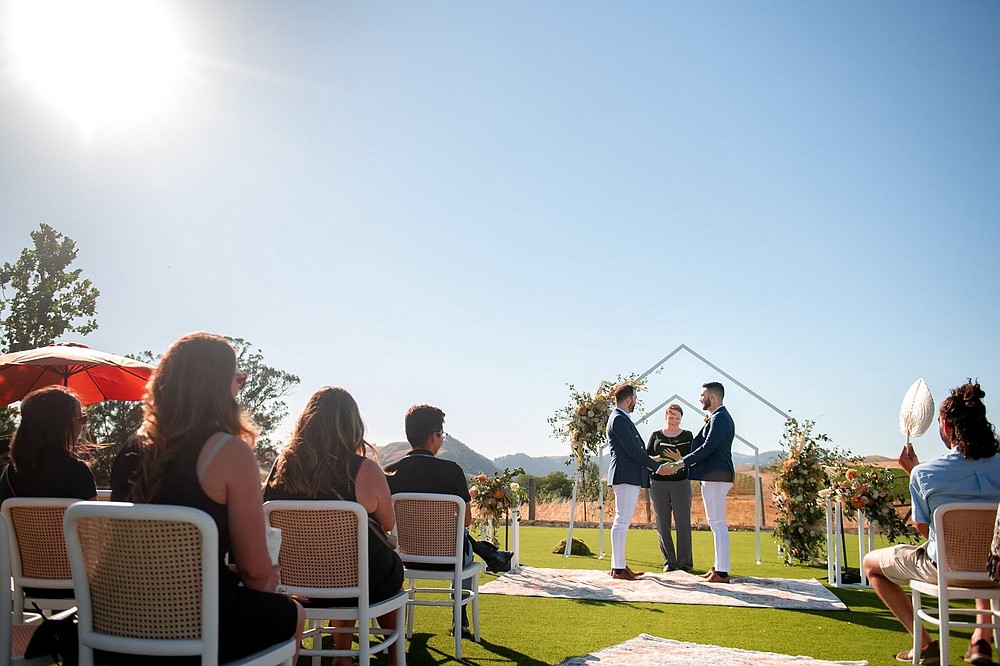 With roling hills in the distance, Michael DeSalvo Solarte (left) and Alejandro Solarte DeSalvo exchange vows June 25, 2021, at Carneros Resort and Spa in the Napa Valley region of California. The couple won a contest sponsored by Visit California to have their wedding at the resort. (Special to the Democrat-Gazette/Max Whittaker)

"I think our wedding was 100% vaccinated," Cody says, though a few guests from out of state couldn't make it because of different vaccination rollout schedules.

"We wouldn't change a thing," Cody says. "We were so happy with how it went. We finally had some luck and it all went perfectly. It was fun, and it was kind of like everybody's first big outing in a long time."

"For me, I wanted to do the whole thing in one swoop," Reagan says. "Do the church, do the reception, and that's that."

They'd intended to honeymoon in Croatia, but that has been put on hold.

They do plan to take take a trip to Florida later this year.

Alejandro and Michael have postponed their honeymoon until next year.

As for life in a marriage: "We've always felt like a married couple," Michael says. "We always do things together. Our lives are really intertwined and we are one unit. I married my best friend." 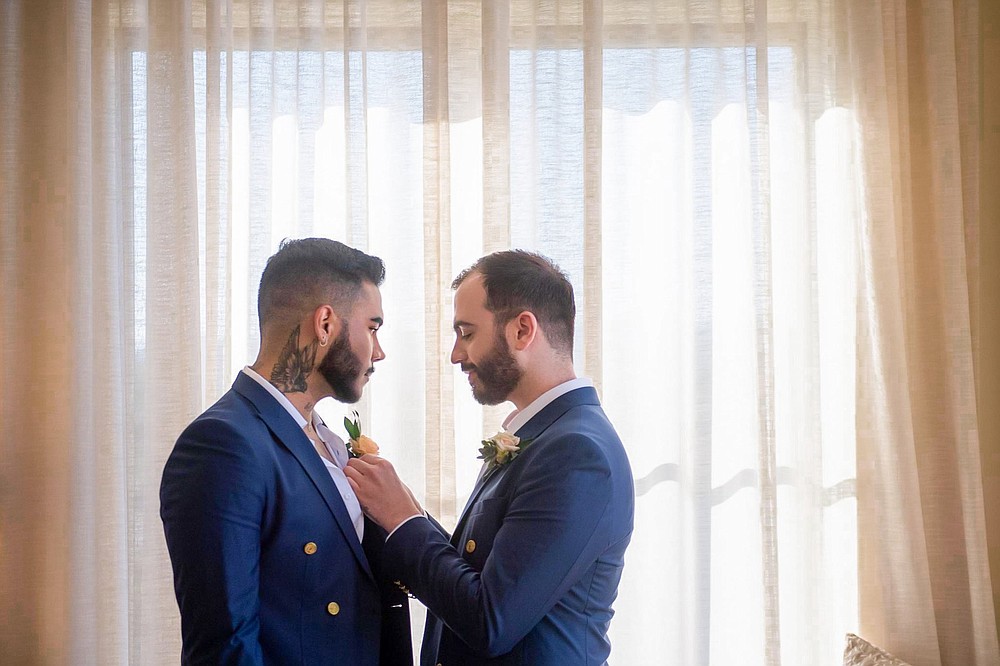 Michael DeSalvo Solarte (left) and his husband Alejandro Solarte DeSalvo share a moment June 25 before their ceremony. The couple had postponed plans to marry until 2022 but won a trip to be married at Carneros Resort and Spa in California's Napa Valley through the nonprofit Visit California. (Special to the Democrat-Gazette/Max Whittaker)

Print Headline: At last! I do!