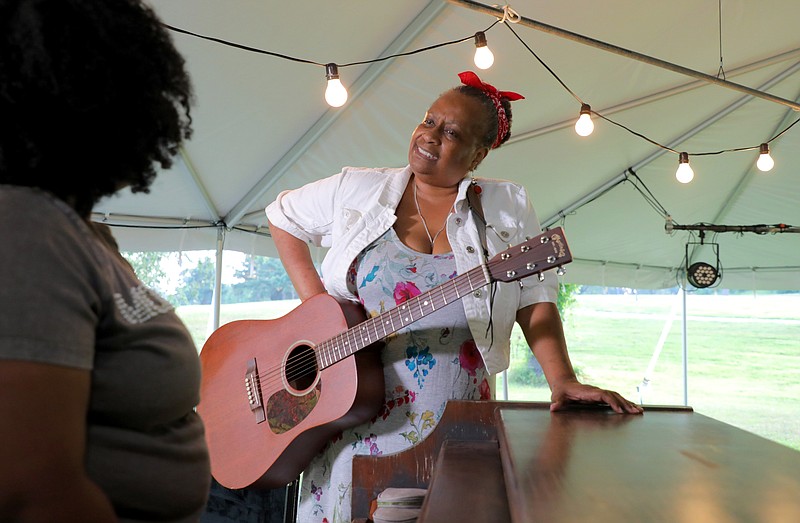 En route to Broadway, director Steve H. Broadnax III is making a stop in his home town of Little Rock.

Broadnax, who directed the 2019 production of "Native Gardens" at the Arkansas Repertory Theatre, is taking on another Rep project: "Marie & Rosetta" by George Brant, opening tonight in a tent on the grounds of Little Rock's War Memorial Park.

The 90-minute, two-character play, performed in a single act without intermission, is a celebration of the life and music of Arkansas native Sister Rosetta Tharpe.

Originally set in Mississippi in 1946, this version of the play has moved to Arkansas. It focuses on Tharpe's first rehearsal with a young protegee, Marie Knight, as they prepare to embark on the tour that would establish them as one of music's great duet teams.

Tharpe brought fierce guitar playing and swing to gospel music in the '30s and '40s and became a huge influence on, among others, Elvis Presley, Johnny Cash, Ray Charles and Jimi Hendrix. She performed mornings at churches and evenings at the Cotton Club, but ended up buried in an unmarked grave in Philadelphia after she died in 1973. She was inducted into the Rock & Roll Hall of Fame in 2018. 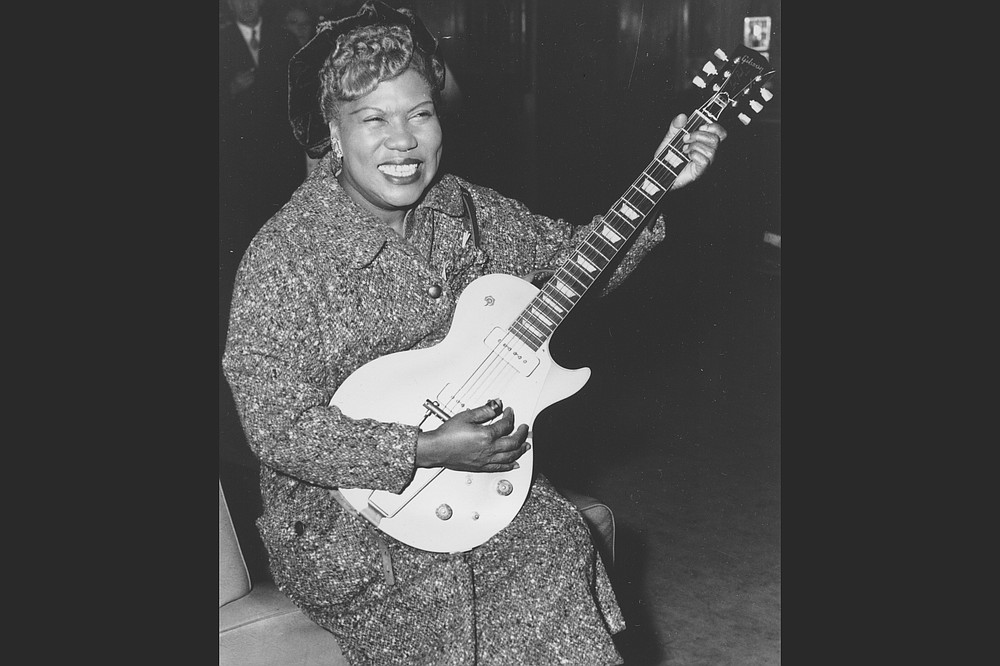 Broadnax says he was an associate producer for New York's Atlantic Theatre Company's 2016 premiere production of "Marie & Rosetta" and says he brought the play to Rep executive artistic director Will Trice.

"When I was directing 'Native Gardens,' I mentioned it to [him]," Broadnax adds. "I told him I would love to bring it home to Arkansas."

Broadnax concedes there is a structural similarity to "Always ... Patsy Cline" which involved an accomplished musical artist and, not a colleague, but a big fan. It's been onstage twice at the Rep, first in the 1993-94 season, followed by a lengthy tour, and again in 2009.

The two actors and the two on-stage musicians have been rehearsing outside, under the tent, to accustom themselves to the conditions under which they'll be performing.

Will the characters play instruments on stage? "Yes," Broadnax says, "and no."

Broadnax will make his Broadway debut this fall with "Thoughts of a Colored Man" by Keenan Scott II, opening in previews Oct. 1 with an Oct. 31 official opening at the John Golden Theatre. He describes it as "one of the smaller Broadway houses," with a capacity of 804. It's being billed as Broadway's first new post-pandemic play.

The Broadway.com website describes the show as focusing on "a single day in the pulsing heart of Brooklyn," and "the hopes, sorrows, fears, and joys of seven men [that] reverberate far beyond the barbershops and basketball courts of their community. ... [It] weaves spoken word, slam poetry and rhythm into a mosaic of the inner lives of Black men." The cast includes Keith David, Dyllon Burnside and Luke James.

The show premiered in the 2019-20 season at Syracuse Center Stage (now the "home" of former Rep producing artistic director Bob Hupp), with a Baltimore out-of-town tryout. "The producers called me and asked would I be interested," Broadnax says. "I met with the playwright" — who is also making his Broadway debut — "and he and I hit it off."

The production team is Broadway caliber, Broadnax says, but the size of the production is modest. "On the scale of things, it's not 'The Lion King.'" 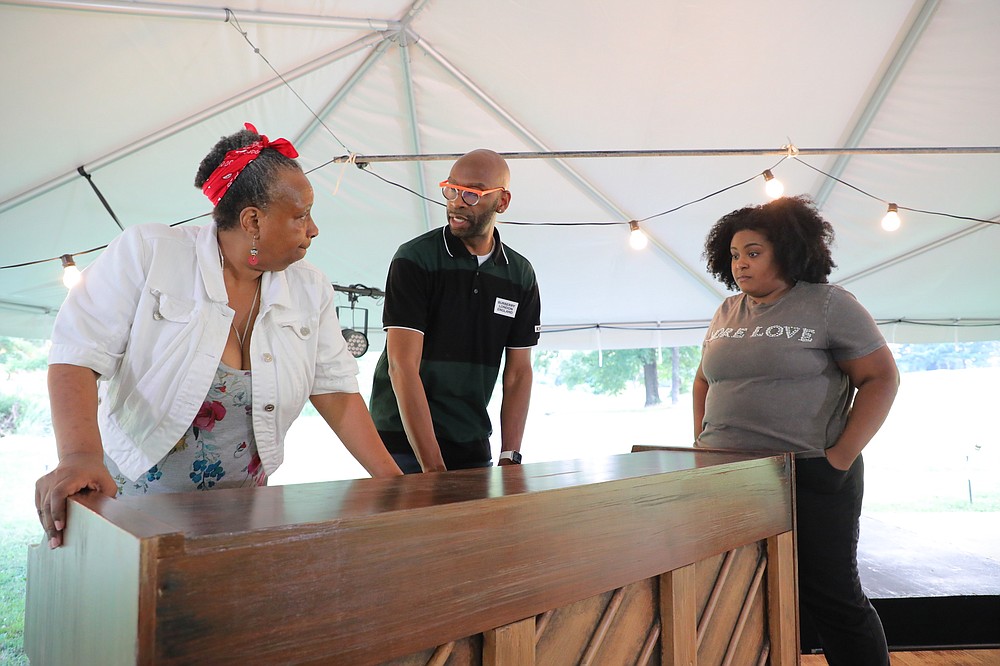 Before the pandemic, Broadnax was helming Katori Hall's "The Hot Wing King" off-Broadway at the Signature Theatre. The show hit the stage in February 2020, and was two weeks short of finishing its run when the covid-19 pandemic shut down theaters in March. Meanwhile, earlier this month the play received the 2021 Pulitzer Prize for Drama. Broadnax proudly claims he had a hand in its development: "100% [Hall] would not have written it" if he hadn't suggested that her stories about growing up in Memphis and her brother's involvement with a culinary festival.

Broadnax, who grew up in Little Rock, knows the Rep well. He was part of the cast of "Dreamgirls" in the 2004-05 season. And his "Hip Hop Project," which he created in 2004 while teaching and heading up the theater program at the University of Arkansas at Pine Bluff, played for a week at the Rep in July-August 2005 after becoming a regional winner in the 37th annual Kennedy Center American College Theater Festival and selling out several performances at the Kennedy Center's Terrace Theater in Washington. (The show also had a run in Seattle and an encore performance in late August 2005 at Little Rock's Robinson Center Performance Hall.)

Broadnax spent his covid "lockdown" at State College, Pa., where he is on the theater faculty at Penn State University and where Mitchell was one of his master of fine arts grad students. (Her credits include a production of "Marie & Rosetta" at the Detroit Public Theatre. Braden, meanwhile, had played Tharpe on tour.)

During the pandemic period, he says, "the university did not stop," offering a hybrid of live and online classes. "I taught 'business of the business,' easy enough to do online"; a hip-hop theater class, though, required occasional "times needed to be in the studio."

Broadnax's active projects include a show he has written called "Me and the Devil," set in Helena, about blues legend Robert Johnson, who famously supposedly sold his soul to the Devil, which Philadelphia's Lantern Theater Company filmed in the theater and will be available via their website, lanterntheater.org, in September. And Philadelphia's People's Light Theater Company has tentatively scheduled Broadnax's musical, "Bayard Rustin: Inside Ashland," for its 2021-22 season.

"Hopefully I can bring that here," Broadnax says. "Will is considering it for next season."

"Marie & Rosetta" is the first of two outdoor productions the Rep is staging this summer.

"Primating," the world premiere of a romantic comedy by Jennifer Vanderbes and set in an African safari camp, will be onstage Aug. 10-29 at the Little Rock Zoo.