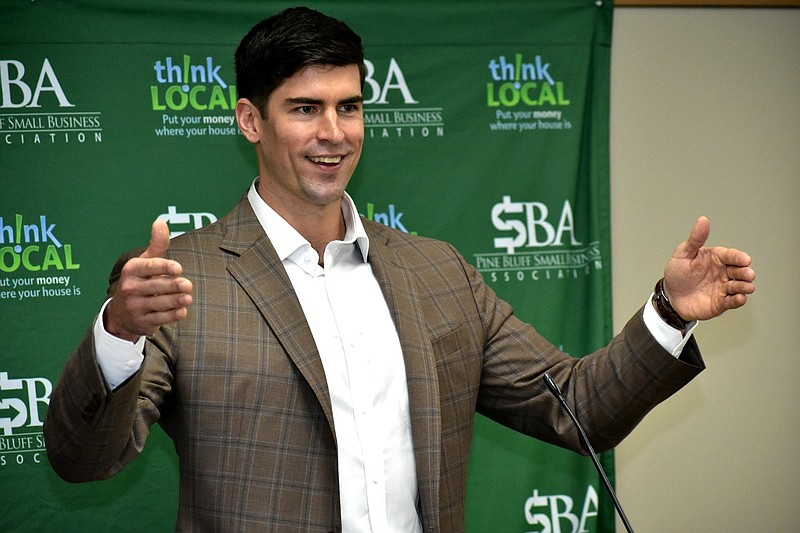 The challenger's introductory video refers to Bequette as a "Patriot. Veteran. Razorback." It features numerous images and video of Bequette playing for the Hogs.

"We have asked the campaign, initially by phone and then through a formal request, to modify its videos related to the unauthorized use of the Razorback trademark for political purposes," university spokesman Mark Rushing said in an email. "So the campaign is aware of the issues, but they are not yet resolved."

Asked about the objection, the Bequette campaign Thursday defended his use of the Razorback label.

"Jake Bequette is proud of his time at the University of Arkansas where he was an academic All-American and All-SEC defensive end," the campaign said in a statement. "He will continue to proudly call himself a Razorback."

The Boozman campaign did not respond to requests for comment.

On Wednesday, Harold Evans, the university system's associate vice president, legal and research, wrote to an attorney for the Bequette campaign expressing concerns about the videos.

Bequette's ads, Evans noted, "feature numerous images of and references to the Razorback Marks and the University."

"As is our standard practice, we have requested of every political campaign that has used the Razorback Marks and other University trademarks without authorization to refrain from such activity since the public will erroneously believe that the political campaign or its advertising or promotions have been licensed, sponsored, authorized or endorsed by the University," he wrote. "A brief disclaimer at the beginning of a political ad is insufficient to negate the images of and references to the University and its trademarks."

In the request, Evans noted that board of trustees policy 100.7 limits the use of the university's name or trademarks.

"Without the express permission of the President, associations that are generally prohibited include, but are not limited to, alcoholic beverages; illegal drugs; cigarettes or other tobacco products; sexually oriented products or services; religious affiliations, products or organizations; political campaigns, parties or organizations; private gaming or games of chance; and firearms or other weapons," the policy states.

"For the above reasons, the University requests that you immediately discontinue use of the Razorback Marks and other references to the University other than as a statement of an educational credential or for the sole purpose of conveying a statement or brief illustration of a biographical or historical fact about a candidate or issue (e.g., 'Former Football Player for the University of Arkansas')," Evans wrote.

This isn't the first time the school has weighed in on U.S. Senate advertising.

When Boozman, then a U.S. House member, first ran for the Senate in 2010, he had an ad that highlighted his own football days. Titled "Razorback Lessons," it was shot outside Razorback Stadium and included a helmet bearing the team logo.

"We don't experience a lot of trademark issues involving political campaigns but they do occur from time to time," Rushing said in his email. "To my knowledge, once notified of issues, those involved have all been very cooperative, wanting to work with the university to resolve any issues."