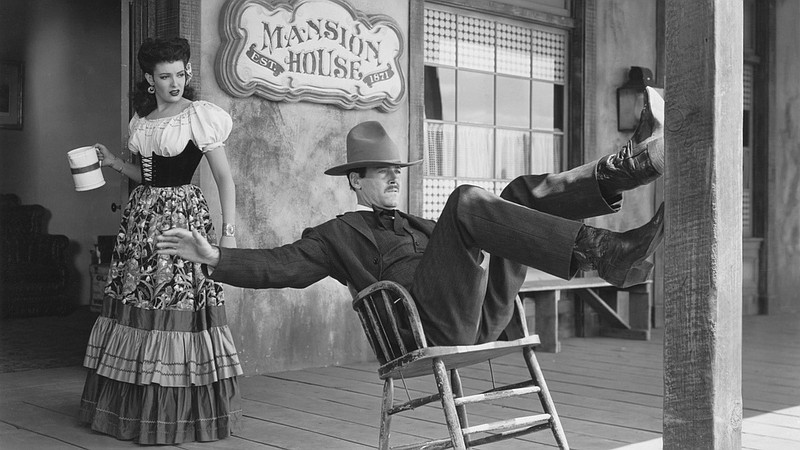 Chihuahua (Linda Darnell) waits for Wyatt Earp (Henry Fonda) to steady himself in “My Darling Clementine,” an excellent 1946 Western from John Ford that doesn’t follow history with much accuracy.

I understand the impulse. We worked hard to get a review of "Space Jam: A New Legacy" in the newspaper this week, but Warner Bros. wasn't having it. So far, the only reviews of the film I've seen have come from Australia, where it opened on July 8. Most critics -- obviously not the target demographic for the movie -- were unimpressed.

"It's a cynical exercise in marketing that makes you want to walk away in disgust," Wenlei Ma wrote on the conservative news.com.au website owned by News Corp Australia that is, depending on who's measuring, the first or third most-visited internet site in Australia. Ma did think LeBron James was a more charismatic screen presence than Michael Jordan was in the 1996 original.

I have my doubts whether any review dissuades anyone from seeing a high-profile film like "Space Jam," and dissuading people from seeing it is hardly the goal anyway. Some movies are just beach balls; if you want to mess around with them a little while, fine. If not, fine. I don't know if it's worth writing about beach balls; most people know what they are and whether they like them or not.

What's more interesting than "Space Jam: A New Legacy" is likely the corporate story behind it. LeBron James is interested in producing content, he has ideas about films and TV series, and he has undeniable star power. He could be a useful actor. It will be fascinating to see what he does after he stops playing basketball in, as he told podcasters Will Arnett, Jason Bateman and Sean Hayes this week, "four, five, six, whatever, seven," years.

Another movie we don't have a review of this week is "Escape Room: Tournament of Champions," which is the sequel to 2019's "Escape Room," reportedly "the box office hit psychological thriller that terrified audiences around the world" that somehow completely escaped my attention. All the reviews I found for this one were also out of Australia, where everything opens a week or two before we get it here.

Two are mildly favorable, three are mildly unfavorable. It's not as gruesome as it could be, but it's not great, a high summer horror movie aimed at youth and preteens, hence the PG-13 rating.

My LifeQuest summer movie class has started; we had a good crowd at the two screenings I've had so far.

This week I showed "My Darling Clementine," John Ford's mythic 1946 Western that stars Henry Fonda as Wyatt Earp and goes a long way in establishing some of the myths and tropes we take for granted. It's a wonderful movie, beautifully shot in black and white, with what the often-abused-in-these-pages Bosley Crowther recognized as "a tone of pictorial authority."

Ford was always quick to tell the story of how he'd actually known Earp.

"When Wyatt Earp retired as a lawman," Ford tells Fonda in the 1971 TV documentary "The American West of John Ford," "he went to some little town north of Pasadena. Now his wife was a very devout religious woman. And a couple of times a year she'd go to these religious conventions in Utah and eastern Arizona."

Earp would take advantage of her travel to sneak off to the movie lots at Universal City, where he befriended young Ford.

"We became quite friendly, and I didn't know anything about the O.K. Corral at the time, but [actor] Harry Carey knew about it. He asked Wyatt and Wyatt described the fight fully... As a matter of fact he drew it out on paper, a sketch of the entire thing."

Maybe he did, but if so, the accuracy of the gunfight is an anomaly. Almost nothing in the movie is historically correct.

Ford introduces Wyatt Earp and his brothers as cattle drivers, but they never worked as cowboys.

It portrays Doc Holliday (Victor Mature) as a surgeon; in real life he was a dentist and he didn't die in Tombstone as depicted in the movie, he died of tuberculosis in Colorado six years after the O.K. Corral shootout, which happened in 1881, not, as "My Darling Clementine" suggests, 1882.

James Earp, a teenager who is murdered at the beginning of the movie, lived to be 84. He was Wyatt's oldest brother, not his youngest.

Old Man Clanton (Walter Brennan) was not present at the O.K. Corral shootout because he'd been killed in an ambush a few months earlier.

And that's just what I noticed -- and I'm no Old West scholar.

Still, it hardly matters. As someone once said, people who get their history from the movies get the history they deserve.