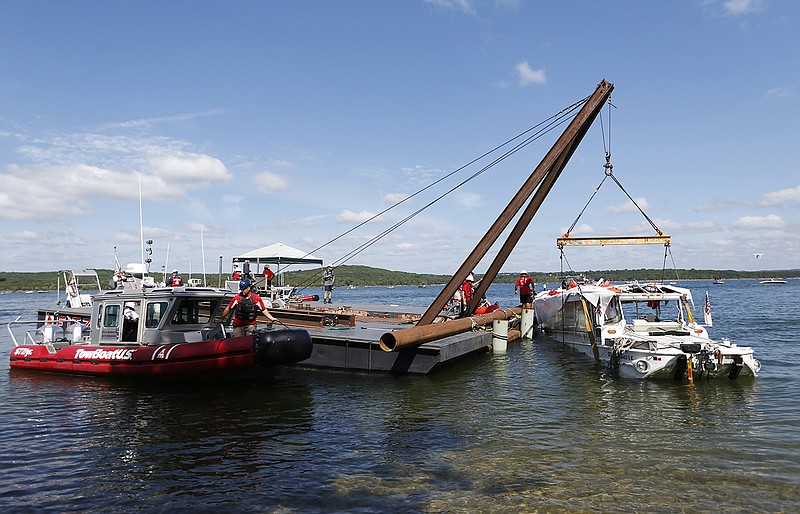 BRANSON -- The Missouri attorney general and the Stone County, Mo., prosecuting attorney Friday announced the filing of criminal charges against three employees of a Branson company whose duck boat capsized during a 2018 storm on Table Rock Lake, killing 17 people, including two Arkansans.

The charges stem from the decision by Ride the Ducks employees to have a sightseeing vessel with 31 people on board take to the water of Table Rock Lake in southwest Missouri just ahead of a storm that pummeled the region and caused the boat to sink.

Those charged are Kenneth Scott McKee, 54, captain of the boat; Curtis P. Lanham, 38, general manager at Ride the Ducks in Branson; and Charles V. Baltzell, 79, operations supervisor who was acting as a manager on duty that night.

An Arkansas father and son -- Steve Smith, 53, and Lance Smith, 15 of Osceola -- were among those who died. Steve Smith's daughter, Loren, then 14, was among the 14 survivors.

The charges, filed in Stone County Circuit Court, were announced in a news release from Missouri Attorney General Eric Schmitt, who provided no further comment.

A probable cause statement accused McKee of failing in his role as a boat captain when he took the duck boat on the lake as a storm approached and by not having passengers wear flotation devices.

However, a National Transportation Safety Board report examining the tragedy said life jackets can increase the risk to passengers if there is an overhead canopy, as the duck boat on Table Rock Lake had, because it can trap passengers against it as it sinks.

The document also accuses Lanham and Baltzell of not communicating the danger of the oncoming storm and halting the tour.

A spokeswoman for Ripley Entertainment, which owned the Ride the Ducks operation in Branson, issued an immediate response to the announcement of charges.

"We continue to cooperate with all investigations into the sudden and severe storm known as a derecho that struck Table Rock Lake in July of 2018, resulting in a tragic accident," said Suzanne Smagala-Potts in an email to the Kansas City Star. "We have and will continue to offer support for our current and former employees as this process moves forward."

Lawyers for Baltzell, Lanham and McKee said their clients would enter innocent pleas.

"Although this was a tragedy, we do not believe that any of those charged committed any criminal conduct and intend to fight the matter in both state and federal court," said Tom Bath, who represents Lanham.

The deaths prompted a torrent of lawsuits against Ride the Ducks and Ripley Entertainment. They settled on confidential terms.

Schmitt and Stone County Prosecuting Attorney Matt Selby brought the action just days before the three-year statute of limitations for criminal charges were set to expire. The filing of Friday's felony complaint marks the second time the three men have faced criminal charges.

A federal grand jury indictment filed in 2019 alleging misconduct, negligence and inattention to duty was dismissed in December. A federal judge in Springfield ruled that federal prosecutors did not have jurisdiction over the case because of the characteristics of Table Rock Lake, but conceded that state prosecutors could file a case if they so decided.

The Table Rock Lake disaster drew national attention, for the tragic nature of the incident -- of the 17 who died, nine were members of one family -- and because earlier warnings of safety concerns raised by a government agency likely could have saved lives had they been heeded by the U.S. Coast Guard or Congress.

Tia Coleman of Indianapolis survived the duck boat sinking and was a member of the family that lost nine people to the tragedy, including her husband and three children.

In a statement provided by her lawyers, she said her "prayers have been answered" after the filing of the charges.

"I am so hopeful that we are one major step closer to justice for all those that perished, and to preventing what happened to them from ever happening again," Coleman said in a statement.

The fatal boat tour was initially set to begin on land, which was its usual course, but before the first passengers boarded Stretch Duck 7, an individual stepped onto the back of the boat at 6:28 p.m. and told the crew to conduct the water portion of the tour first, the National Transportation Safety Board said.

The NTSB in its final report said Ripley Entertainment left decision-making authority to the captains of the duck boats, even though managers had better access to tools that would monitor the weather conditions.

When the boat started its water tour at 6:55 p.m., the lake appeared calm.

McKee's only source of weather information once he took the boat on the water was his ability to look around and see what was going on, the NTSB report said.

In his interview with the Missouri Highway Patrol, McKee said as the boat was on its tour, he could see some dark clouds "quite a ways" off in the distance.

A passenger, whose name was redacted from the Highway Patrol transcript of the interview, said there were big clouds visible 5 minutes before the boat was on the water, which was worrisome.

"[A]nd the captain, who was usually talking and stuff, he was, he was like, 'Oh, yeah, it's nothing to worry about; it's just, it's just the clouds. We'll be just a little humid and stuff,'" the passenger said. "But we weren't really worrying about the humidity and stuff. We were worrying about our safety."

Just after 7 p.m., winds increased and whitecaps were visible on the water, according to an initial report released by the NTSB.

"All of a sudden there was -- you could just see the water just erupt," McKee said, according to the transcript, adding later that he had never seen the lake get so rough so quickly.

Less than a minute later, the captain of the Ride the Ducks boat made a comment about the storm, the NTSB report said, without further explanation.

"I was a little worried, and everyone was," the unnamed passenger said. "One kid was screaming, 'I don't want to be in the Titanic.'"

After struggling helplessly in the churning water, the boat started to sink at 7:09 p.m.

While NTSB investigators never interviewed McKee, the agency concluded that he was aware of the duck boat's operating instructions and probably would not have started the tour if the lake hadn't been calm when he entered the water.

"Despite being aware of the oncoming weather that he had observed on weather radar before leaving the duck dock, he was not aware of the storm's intensity," the NTSB report said.

The report also said as the wind strengthened on the lake, McKee skipped the usual path of the water tour and headed straight for the exit ramp. Going back to the entry ramp would have put the boat at risk of waves on the lake, the report said.

"Therefore, the NTSB concludes that the captain's decision to head toward the exit ramp when encountering the severe weather was appropriate," the NTSB said.

A federal grand jury indictment against McKee was handed down in November 2018. Among the violations he was accused of were not properly assessing incoming weather before taking the boat out on water; operating the boat in conditions that violated the Coast Guard's certificate of inspection; not telling passengers to use flotation devices; not speeding up to head to the nearest shore as severe weather approached; and failing to raise the side curtains of the boat when its bilge alarm sounded as it took on water.

In June 2019, a federal grand jury indicted Lanham and Baltzell, and added additional charges against McKee. Prosecutors claimed that the three were more interested in profit than passenger safety.

The indictment was dismissed in December when a federal judge determined that Table Rock Lake was not navigable, which is to say that it doesn't support commercial activity. The distinction was important. Under United States admiralty law, criminal charges like the ones filed against the three men only apply in federal court if the waterway upon which the crime is alleged to have happened is deemed navigable.

State prosecutors in Missouri, however, are not bound by that distinction.

The tour boats, which ran on Table Rock Lake and Lake Taneycomo, have not been operating in Branson since the tragedy.

In January, a new company, Branson Duck Tours LLC, announced that it would start the duck boat tours once again with vessels it said would be safer.