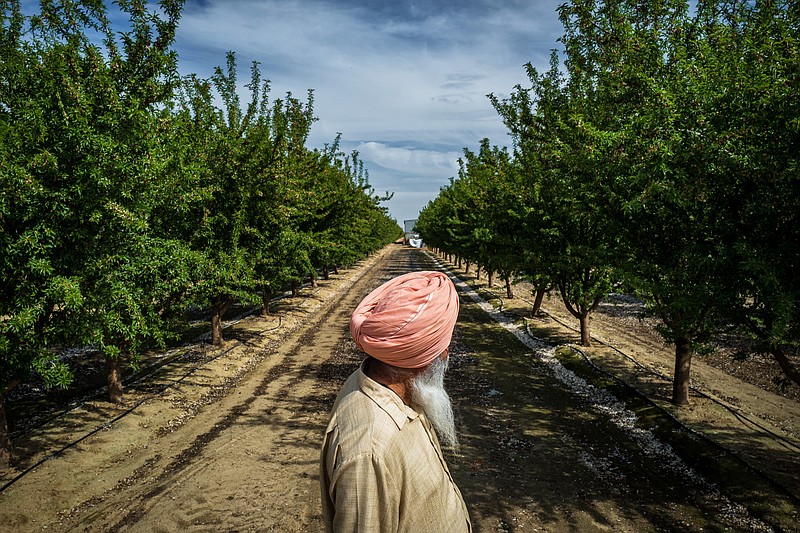 Sarbjit Sran surveys trees at his family farm in Kerman, Calif. where he grows a raisins and almonds, March 17, 2021. In California, a young generation of Sikh farmers has agricultural roots that stretch back 900 years. (Ryan Christopher Jones/The New York Times)

KERMAN, Calif. -- Simranjit Singh is a second-generation American farmer, but his agricultural roots go back 900 years.

Before his father moved to California from India in 1991, before India gained independence from Britain in 1947, before his Sikh culture took root in 1469, the civilizations of Northern India worked various agricultural lands. Singh, 28, is part of that unbroken lineage.

On a secluded 100-acre farm in the San Joaquin Valley of California, he and his father tend the family's raisin and almond orchards, determined to keep their heritage vital.

"Whatever is passed to me from my father is so valuable that I would be a fool to throw it away," he said. "Farming will always be at the core of who I am."

Over the past century, ethnic diasporas from all over the world have labored in these fields, as people from Armenia, Mexico, Southeast Asia, China and many other places have built lives and families rooted in central California's fertile soil. It's a place whose economy and lifeblood are defined by the land and the people who work it. Punjabi Sikhs are among the most recent migrants to try their luck.

The Sran farm, where Singh works with his father, Sarbjit Sran, is a full-time business with just the two men running most day-to-day operations. Singh's mother, Jaswinder Sran, 55, sometimes joins them in the fields. Only during the late-summer harvest does the family hire contract laborers to reap the ripened crops.

Singh and other younger Sikh farmers in the region are already a shrinking group. Economic mobility has pushed recent generations into more traditionally white-collar occupations, even as the remaining farmers feel duty bound to continue.

"Around here, you don't have as many Punjabi workers as we used to have in the '80s and '90s, because the kids are now doing professional things," said Simon Sihota, a prominent Punjabi Sikh farmer in the area.

Like the Sran farm, Sihota's business remains mostly a family affair. His son Arvin, 22, just graduated from California Polytechnic State University with a degree in farm management, and his older son, Kavin, 24, has a degree from Cornell in enology, the science of making wine. His daughter Jasleen, 20, regularly helps with administrative duties for the family business.

The family works together in the same way that Sihota helped his father and grandfather in the fields when he was young. His father arrived in California from India in 1961 and eventually saved enough money to buy 40 acres; the farm has since grown to 3,000 acres of almonds, pistachios, wine grapes and peaches.

"I can't see myself doing anything else," said Kavin Sihota. "When I was out on the East Coast, I'd always miss the farming lifestyle."

Though young Sikh farmers like Kavin Sihota and Simranjit Singh are increasingly uncommon in this part of the world, their peers have found different ways to engage with the tradition of Indian farming and their Sikh community more broadly.

Since September, farmers in India have been protesting new agricultural laws they say will devastate small farmers and limit the income their land can generate. The new rules minimize the government's role in farming and do away with state protections, which farmers fear will leave them at the mercy of the unfettered free market.

As word of the protests made it to the United States, young American Sikhs have shown their support on social media and at local rallies.

Anureet Kaur, 16, a high school sophomore from Selma, Calif., posted so frequently about the Indian farm demonstrations that her Instagram account, with nearly 6,500 followers, was temporarily restricted.

"I'll continue to raise my voice for farmers," she said. "After all, I'm the daughter of a farmer."

Along with a few friends, Kaur recently volunteered at a mass coronavirus vaccination event at a Sikh temple in Selma, preparing food and directing traffic. The event vaccinated 1,000 people on a single Saturday in March. According to Deep Singh, executive director of the Jakara Movement, a Sikh community-building organization, the event was specifically aimed at vaccinating local farming families as "part of our dedication to those most marginalized and vulnerable in the region."

One car at the event was painted with "#FarmersProtest" and "I stand with the Farmers," a sentiment echoed by many event volunteers and area Sikhs around the valley.

In Madera, Calif., Sohan Samran has shown support in a more tangible way. The owner of Bapu Almond Co. shipped nearly 7,000 pounds of almonds directly to the protesters in India.

Bapu is a term of endearment in Punjabi for an older male relative, and the business name is a way to honor the farming tradition of his own family and culture. At Bapu farms, the word is emblazoned everywhere, on stacks of almond containers, on farm equipment and on company branding. The word is a constant reminder that for many Sikhs in the agricultural world, family and farming go hand in hand.

On a warm Sunday afternoon in Kerman, Singh and Sran relaxed inside their home after working the fields at their homestead.

Sitting beneath a painting of an ancient Sikh gurdwara, or place of worship, Singh pointed to his father and said with a smile, "This is my bapu, right here."

One of the primary tenets of Sikh faith is seva, the principle that kindness, humility and service to others make an honorable life.

For Singh and his father, their generational history of family farming is an active part of seva, and they believe that growing crops, tending the land and providing food to their community are all acts of service.

"My work as a farmer is more than a job," Singh said. "I feel like it's a duty, and I'm just trying to do as much seva as I can in the limited time I have here on this planet." 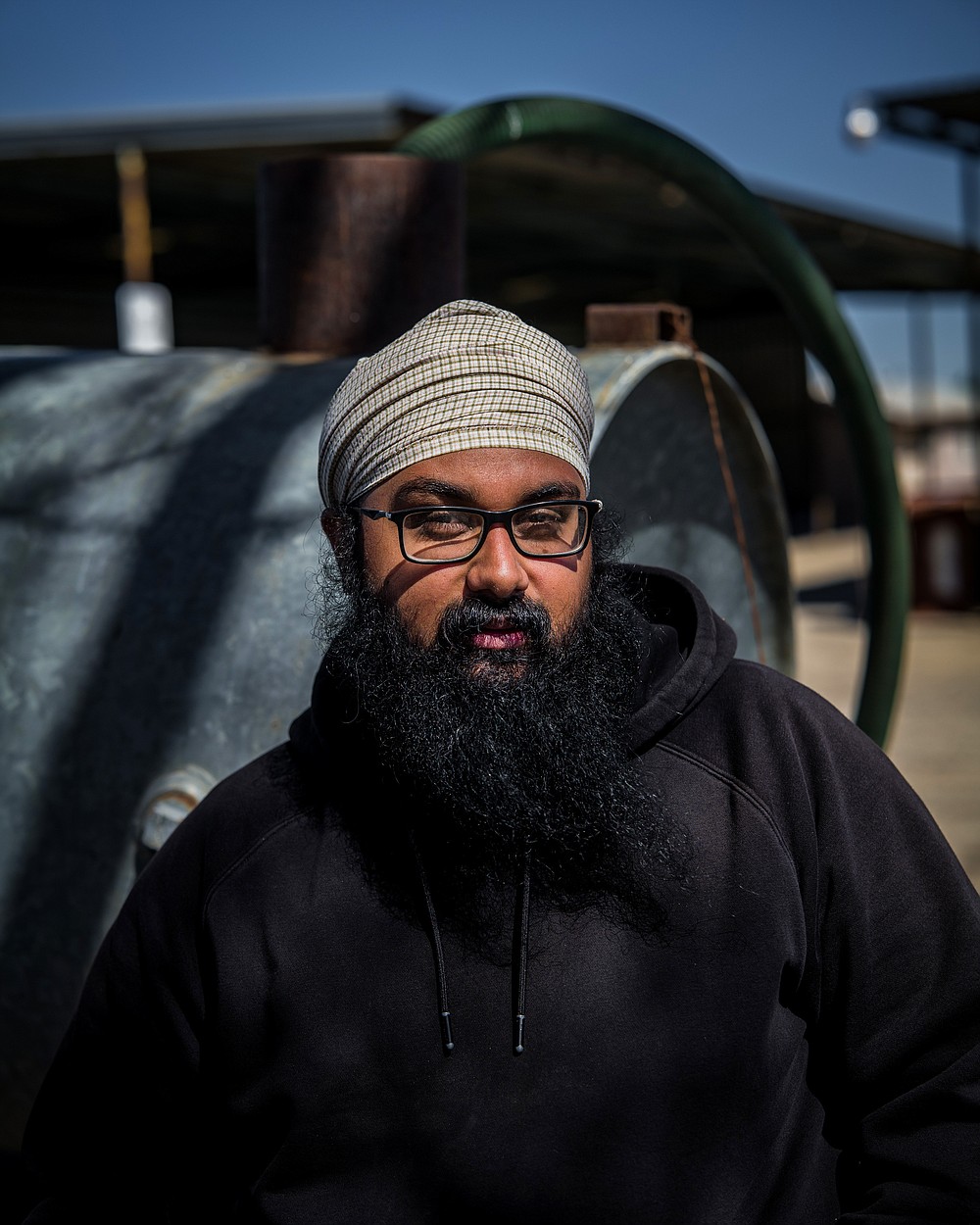 Simranjit Singh at the family farm in Kerman, Calif. where his family grows a raisins and almonds, March 23, 2021. In California, a young generation of Sikh farmers has agricultural roots that stretch back 900 years. (Ryan Christopher Jones/The New York Times) 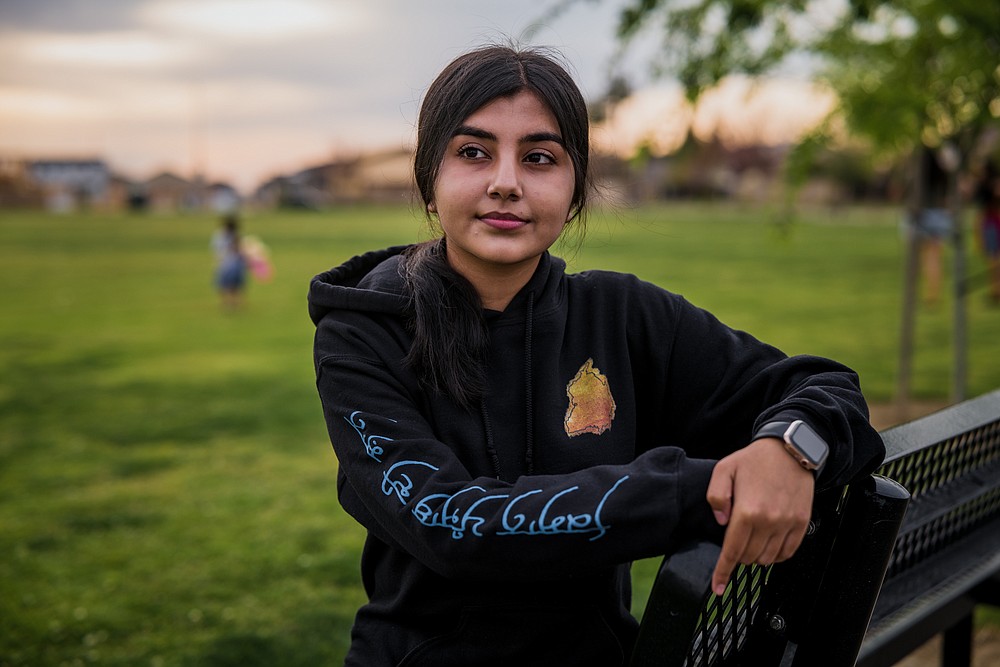 Anureet Kaur at her home in Selma, Calif., March 24, 2021. In California, a young generation of Sikh farmers has agricultural roots that stretch back 900 years. Since the farmers protests of India began last year, Kaur and a growing number of young Punjabi Sikhs have become more politically active in the Sikh community. (Ryan Christopher Jones/The New York Times) 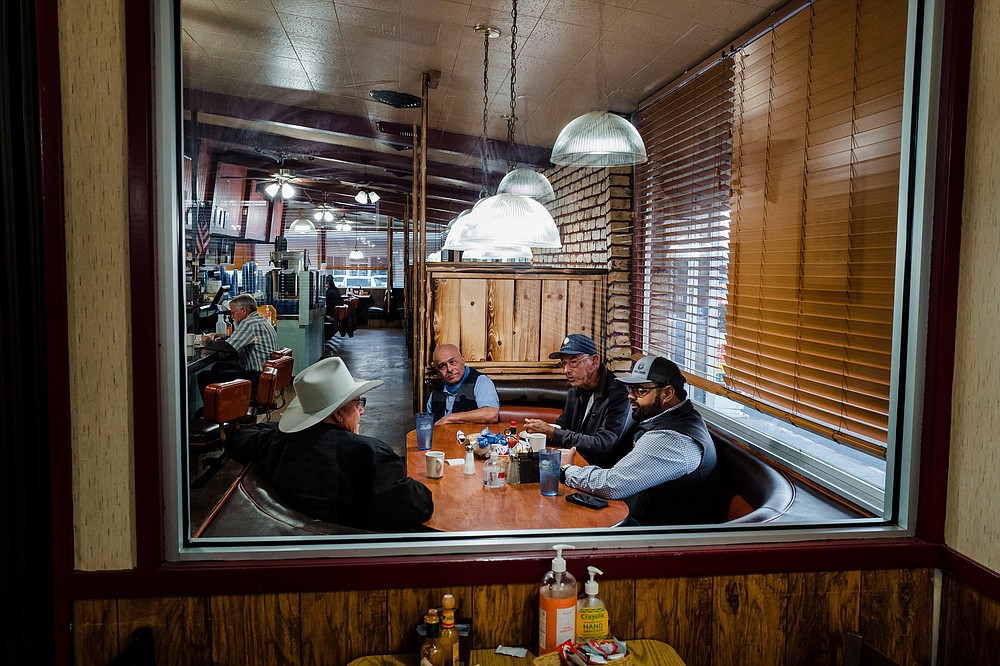 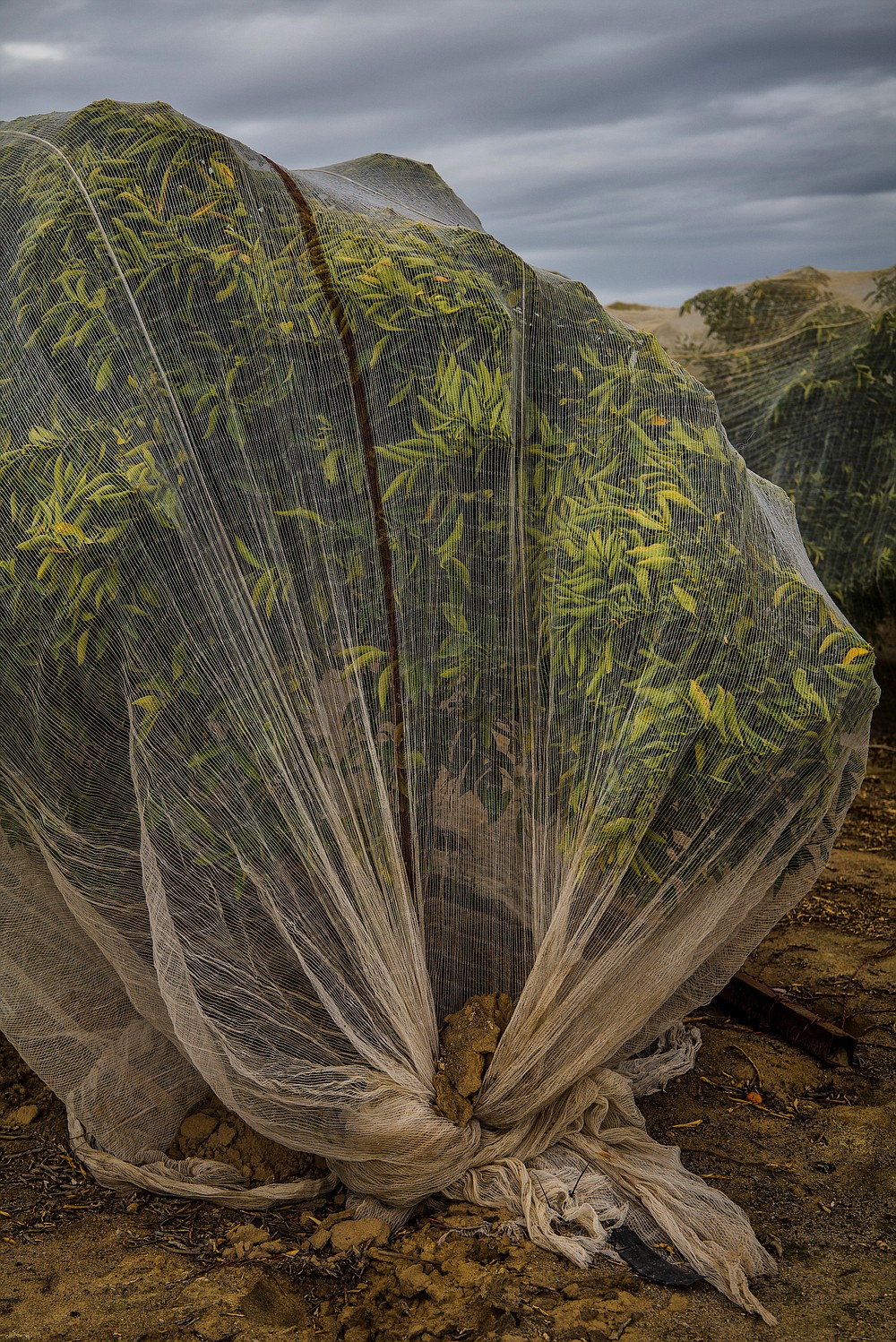 Mosquito nets on almond trees at a farm in Selma, Calif., March 18, 2021. In California, a young generation of Sikh farmers has agricultural roots that stretch back 900 years. (Ryan Christopher Jones/The New York Times)