State says most Fort Smith highways to be improved 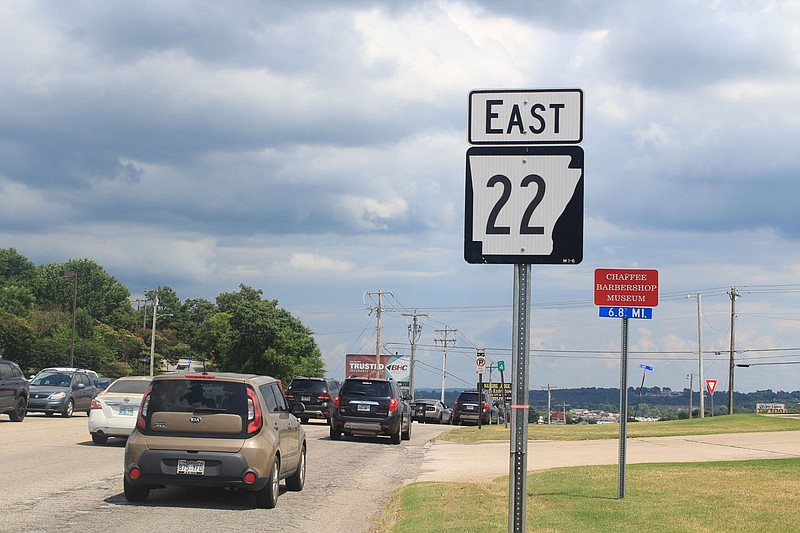 Vehicles travel eastbound on Arkansas Highway 22, or Rogers Avenue, just east of the Highway 540 overpass on Monday, July 12, 2021, in Fort Smith. The Arkansas Department of Transportation plans to widen and resurface Highway 22 east of the overpass.

FORT SMITH -- Most state highways in the city are listed as either under construction or slated for improvements.

With the exception of Midland Boulevard and parts of Interstate 540 and Arkansas 271, state highways in the city have either been scheduled for construction or have plans for upcoming construction. They're set to be improved to the tune of nearly $85 million in 2021 and the coming years, according to Arkansas Department of Transportation estimates.

With the exception of a few thoroughfares such as Grand and Phoenix avenues, the most heavily traveled roads in Fort Smith are state highways. These include Towson, Garrison, Wheeler and Rogers avenues, Midland Boulevard, Riverfront Drive and Zero Street.

The improvements in 2021 are to Wheeler and Rogers avenues and parts of Zero Street -- portions of state highways that function as traffic routes in the city -- and to U.S. 71 between Fort Smith and Greenwood, according to state records.

The state is projected to spend roughly $41 million on these highway improvements, records show.

The projects listed as "scheduled" include resurfacing U.S. 64, or Riverfront Drive, and resurfacing of I-540 north of Rogers Avenue.

"It just seems like for the last five or six years, we haven't had a lot of work just in the Fort Smith region. Then all the sudden, we kind of got flooded with several jobs," said Department of Transportation District 4 Engineer Chad Adams.

Adams pointed to the 2020 passage of Issue 1, which indefinitely continues the state's half-cent sales tax for highway infrastructure, as a likely reason for the influx of projects in the city. The tax in 2020 was estimated to raise $205 million annually for the state.

There's sometimes confusion over which roads are mantained and upgraded by the city or by the state, Adams said.

Adams said he sometimes gets calls about the condition of Wheeler referred to him by the city because of motorists who don't know it's a state highway. The city's Streets and Traffic Control Department only maintains traffic signals over state highways that function as city traffic routes.

"The condition of the highways is always relative," Adams said. "You talk to people in any county, and they'll tell you they have the worst roads in the state. It's because that's the roads they drive on."

Adams said he "wouldn't argue" some state highways in city need work, but added the Department of Transportation only does spot work until there's money for a large project.

Some state highways, including Towson and Rogers avenues, periodically flood during heavy downpours. This is because the drainage capacity beneath the roads, which collects runoff from both state and city routes, isn't large enough to hold both during big rain events.

The state would bear most of the burden of fixing this issue, said Meeker.

"I don't want to say daily we clean them out, but weekly, we're cleaning out drains," said Meeker.

The city and state have worked together to fix highways before.

In October 2019, the city Board of Directors partnered with the state to improve drainage, sidewalks and pavement on Towson Avenue. Once complete, the thoroughfare will be under the jurisdiction of the city. The state committed to cover $10.5 million of the projected $12.5 million project.

State Rep. Justin Boyd, R-Fort Smith, and Highway Commissioner Keith Gibson worked to get the proposal before the board.

Construction for Towson has been postponed to November 2022 due to water and sewer lines that need to be moved out of the way, Adams said.

State Rep. Jay Richardson, D-Fort Smith, said he would like the state to work on Midland Boulevard as well. The road, which is part of U.S. 64, is the main thoroughfare through the north side of Fort Smith and takes northbound traffic into Van Buren.

While Midland is listed as "completed" in state records -- it's been worked on in the last 10 years -- Adams said it has been overlaid "probably within the last seven or eight years."

"It's not as smooth as when we overlaid it, but it still is in decent shape," said Adams.

Richardson said the opportunity to improve highways in Fort Smith "is significant" given recent conversations about growth and development in the city. Boyd agrees.

"The good news is, there have already been several projects in and around Fort Smith where the highways have been overlaid and repaired, and there are several that are set to be under construction," Boyd said. 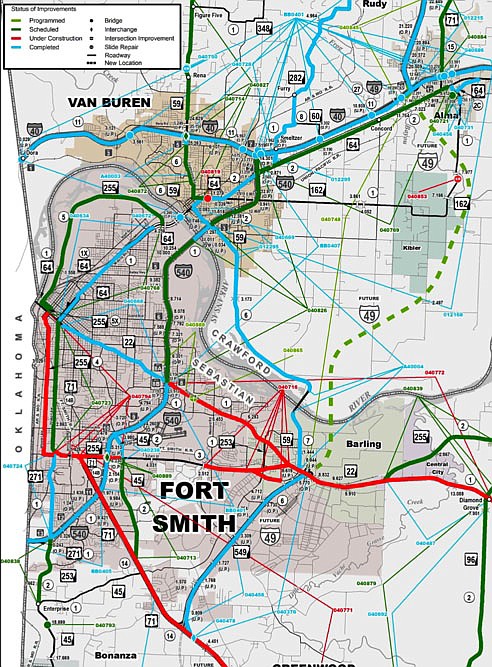 The Arkansas Department of Transportation map of highway projects in Fort Smith is seen.
More News

An extension of Interstate 49 between Barling and Alma has also been listed as “programmed” in the state’s plans. Arkansas officials in recent years have pushed for the completion of I-49, which would run from New Orleans to Kansas City, Mo., once complete.