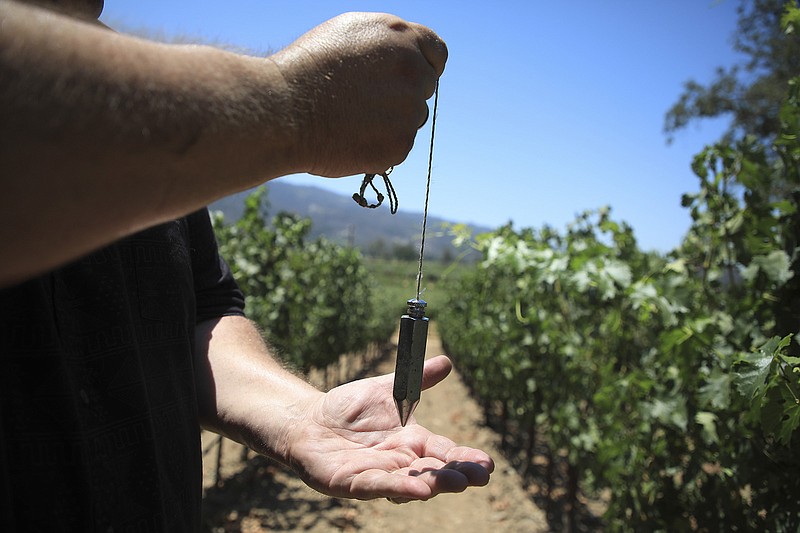 **EMBARGO: No electronic distribution, Web posting or street sales before 3:01 a.m. ET Saturday, July 17, 2021. No exceptions for any reasons. EMBARGO set by source.** Rob Thompson with a pendulum while dowsing for water at a Napa Valley vineyard in Calistoga, Calif., July 13, 2021. Amid California’s drought, desperate landowners and managers are turning to those who practice an ancient, disputed method for locating water. (Jim Wilson/The New York Times)

CALISTOGA, Calif. -- In a vineyard flanked by scorched hills and charcoal trees, Rob Thompson gripped two stainless steel rods, began rotating in a circle and counted under his breath.

Then he said he had found it -- water, hundreds of feet beneath the parched ground.

Thompson is a water witch.

He claims that he can locate streams of water in the fractures in the earth's bedrock, using two L-shaped rods that together resemble an old-fashioned television antenna. Amid California's extreme drought, just a two-hour drive north of the nation's technology capital of Silicon Valley, the water-seeking services of a man relying on two 3-foot rods and a hunch are in demand.

"This is my busiest I think I've ever been in my life," said Thompson, a third-generation water hunter with silvering hair and a lumbering gait. He had been a co-owner of one of Northern California's largest well-drilling companies, but he gave that up and now searches for water full time.

His busy schedule is a sign of the desperation of ranchers, vineyard owners and land managers as California reels from a crippling drought that has depleted aquifers, shrunken crops and forced some farmers to sell off their water rights.

The mystical technique of locating new groundwater sources is thought to have first come into vogue in Europe in the Middle Ages. The method is known as dowsing or divining, or even doodlebugging, and those who practice it are called water dowsers or water witches -- a phrase that may have originated from the practice being deemed witchcraft in the 17th century.

The National Ground Water Association, a group of experts, including hydrogeologists, that promotes responsible water use, describes water witching as "totally without scientific merit." Some California farmers who pay for the service, however, say it often provides a cheaper alternative to traditional methods, like hiring a geologist.

The American Society of Dowsers says it has about 2,000 members, several of whom are working water witches. Other dowsers claim they can locate treasures, lost objects, alien life-forms and stress in the body. Some dowsers dangle a Buddha pendant above a printed map or a laptop screen to find what they are looking for. Thompson -- who also dowses oil, gas and minerals -- says when he steps over groundwater, the energy surrounding him changes, causing an involuntary muscular twitch within him that makes his rods cross.

He and some others who water dowse are blue-collar workers deeply familiar with farming yet whose beliefs in the "sixth sense" or "subconscious happening" of witching are decidedly more New Age than agricultural. Many say the knowledge of their craft has been passed down to them by their elders, and they revere the ancientness of the practice, even if it sometimes earns them a sideward glance.

"People think you're crazy," said Larry Bird, 77, a Sacramento-based dowser who learned the method from his grandfather. He described the sensation of being close to water as being akin to a magnetic field. "It leaves me hot," he said. "Just like if you short a battery."

Sharry Hope, a longtime dowser based in Oroville, Calif., says standing over water leaves her with a "chilling sensation." Hope claims she learned one of the techniques she uses to find water on maps from a former military officer: She swings a pendulum until it stops and points toward a "water vein," Hope said. "I just mark it with a Sharpie."

Although scientists and groundwater experts make clear that the dowsers' methods are unscientific and amount to a kind of hocus-pocus, dozens of vineyards in the wealthy winemaking regions of California have hired them to find water on their lands.

One company that manages vineyards in Napa Valley has hired dowsers across nearly all of the more than 70 vineyards it manages. "I haven't ever used a geologist to find water," said Johnnie White, operations manager of the company, Pina Vineyard Management.

The owner of another company said Thompson had successfully located wells on several properties. "Seeing is believing, right?" said Doug Hill, owner of Hill Family Estate, which manages several vineyards and a winery in Napa Valley.

Fifty of California's 58 counties are under emergency drought declarations. Water holders have been ordered to stop drawing their allotments from rivers. On farms and vineyards, a surge in well drilling and increased reliance on those wells has helped to deplete groundwater, leaving some with no choice but to truck in the precious resource. A waitlist for a driller can be several months to a year, and the hole costs tens of thousands of dollars.

Hydrogeologists use a combination of satellite imagery, geology, topography, geophysical instruments and other hydrologic tools to assess water sources, said Timothy Parker, a Sacramento-based groundwater management consultant, geologist and engineer, "compared to dowsing, which is a person with a stick."

It was possible, Parker and other experts said, that witches got lucky, because it is not hard to find water in many parts of California. Dowsers like Thompson with years of experience in the industry would also have developed a familiarity with the landscape, they added.

"There are economic issues, personal beliefs and desperation factors going into the decision to try dowsing," Ben Frech, a spokesperson for the National Ground Water Association, said in an email. While the group understood that despair could lead to "exploring all options," ultimately, he said, the method was a waste of time and money.

On a recent day in Napa Valley, Thompson leaned out of the passenger side of a four-wheeled all-terrain vehicle to scope out his assignment: locating fresh water on a 155-acre vineyard with two dry wells and others that were underperforming.

Responding to critics of dowsing, he said, "I just laugh at them. They don't know the facts." He added, "I'm rarely wrong."

Choking dust billowed from beneath the wheels. Thompson, shades down, divining rods in hand, maintained a cool demeanor. He planned to charge at least $1,400 for his visit. A geologist had quoted the same site at a minimum of $6,500.

He stepped out of the ATV and placed the rods perpendicular to the earth to "ground out" -- a process he says helps dispel his energy. Then he leaned back, his head cocked in concentration, and held the rods out in front of him, turning slowly until they crossed.

Up the charred hill between two rows of vines razed by last year's wildfires but recently replanted, Thompson's rods crossed again. He said he was sure that he had found "a keeper."

His wife pushed a stake marked with a red ribbon and the words "WELL 9" into the crumbling earth. With a clank, clank, clank, Thompson secured it with a hammer.

He carried a hand-held GPS device so that he could provide a topographic map with his water sites to his clients. But his other methods and tools were all low-tech: bronze and stainless steel rods, a bullet-shaped pendulum on a tattered string.

"Those Silicon people," he added, "still hire me." 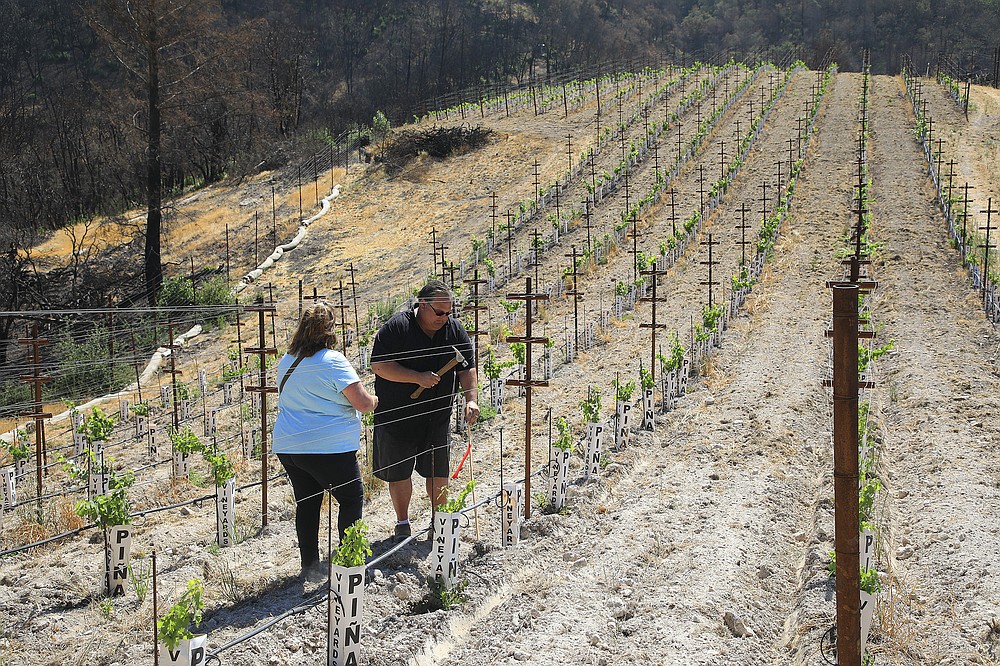 **EMBARGO: No electronic distribution, Web posting or street sales before 3:01 a.m. ET Saturday, July 17, 2021. No exceptions for any reasons. EMBARGO set by source.** Rob Thompson drives a stake into the ground to indicate a possible water well site, while his wife, Robyne, notes the location while dowsing for water at a Napa Valley vineyard in Calistoga, Calif., July 13, 2021. Amid California’s drought, desperate landowners and managers are turning to those who practice an ancient, disputed method for locating water. (Jim Wilson/The New York Times) 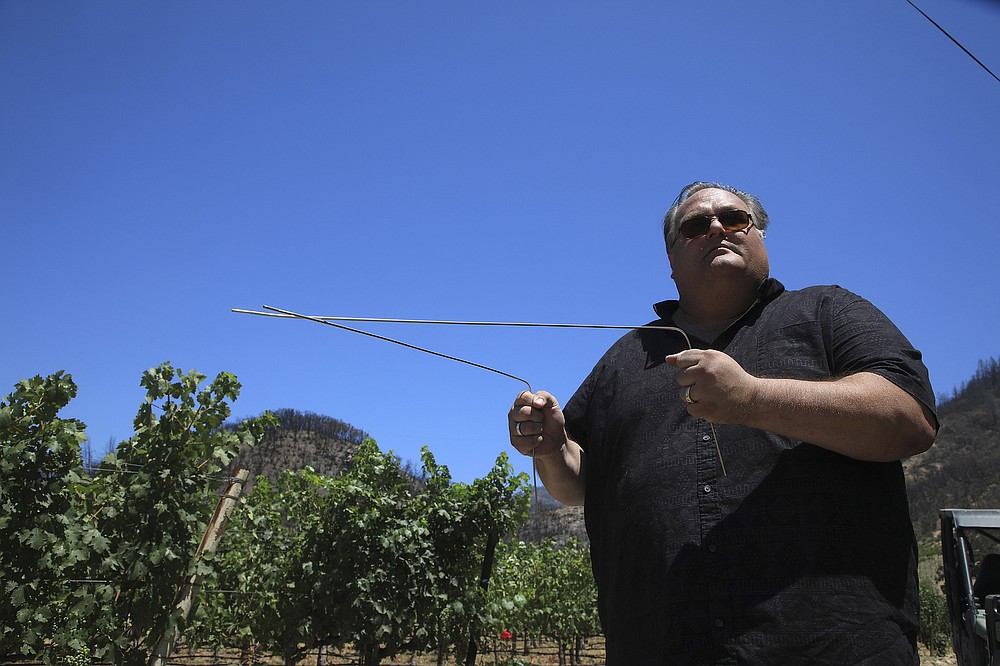 **EMBARGO: No electronic distribution, Web posting or street sales before 3:01 a.m. ET Saturday, July 17, 2021. No exceptions for any reasons. EMBARGO set by source.** Rob Thompson with the stainless steel “L” rods he uses while dowsing for water at a Napa Valley vineyard in Calistoga, Calif., July 13, 2021. Amid California’s drought, desperate landowners and managers are turning to those who practice an ancient, disputed method for locating water. (Jim Wilson/The New York Times)