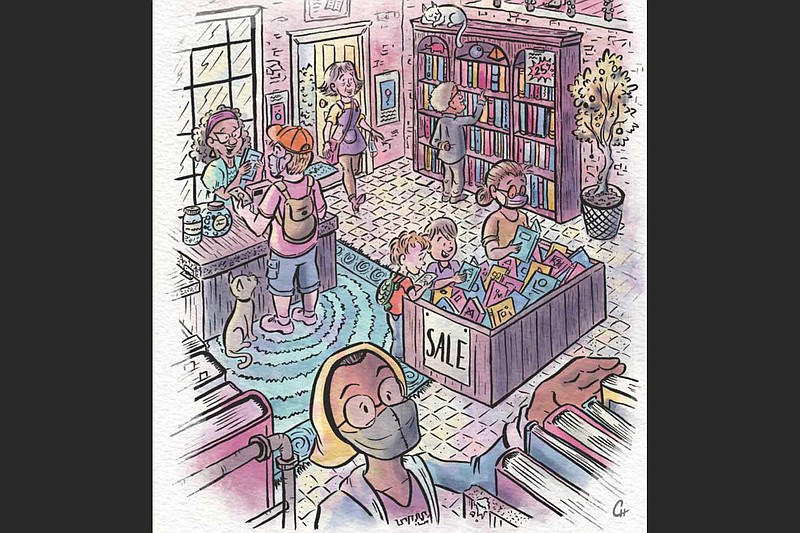 It's a few minutes before 10 a.m. on a Wednesday morning in June and a customer is already in the parking lot at The Book Worm, a used bookstore in Little Rock.

"Guess it's time to open up," says store owner and sole employee Kent Byers as he unlocks the front door of the shop at 6801 W 12th St. A woman enters with a bag of books she's interested in trading or selling. She leaves it at the counter for Byers to sort through as she makes her way toward the back of the store to shop.

The phone starts ringing as two other customers arrive. One caller is moving and has 200 books to bring to the store.

"Told you," says Byers as the phone rings again. "It gets busy here."

Byers, who bought the store in 2007 when it was in Cabot then moved to Little Rock in 2013, closed for the month of April 2020, as the coronavirus spread. On May 1, he reopened and "business was fantastic," he says.

With libraries shut down and Barnes & Noble allowing only a few customers in at a time, book lovers were looking for options and found his store, Byers surmises.

The upswing has continued. "I'll do better this year than I did last year," he says.

Nationally, independent booksellers have fared pretty well through the pandemic.

In late May, the Associated Press reported that membership in the American Booksellers Association rose from 1,635 to 1,701 since May 2020. And while there was a worst-case-scenario fear of hundreds of stores going out of business, the group recorded only 14 closings this year and more than 70 last year.

"It's fair to say that it could have been much, much worse," association Chief Executive Officer Allison K. Hill told AP writer Hillel Italie. She described the independent community as "bruised" but standing.

There are 18 Arkansas shops listed at the booksellers association's website.

Arkansas indie booksellers, like their national counterparts, adapted on the fly as the pandemic became a grim and constant presence. Store owners offered pickup and delivery services, spaced out displays to better accommodate physical distancing and switched to online platforms for special events such as author appearances.

"It slowed way down when we had to close," Young writes in an email, "but we had some loyal customers reach out to make sure we kept the lights on, so to speak. One called and just said 'I've got $200, pick out some good books for me and I'll come pick them up.' Another just straight up donated $100 to us while calling us the 'true church of Russellville.' Even though business was slow, our customers stepped up big time."

It didn't help matters that during the shutdown the store was moving from 301 W. Main St., to its current address at 110 Commerce St., a decision Young describes as "80% due to the pandemic, 20% due to situations outside of our control."

The past months have been "a slow and steady increase back to normal," says Young, who opened the Dog Ear with her mother, Pat Young, in 2016 after Hastings Books, Music & Video closed its Russellville outlet. The store has even added two employees and has a staff of five.

"The first and second draw of the [Paycheck Protection Program] loan saved us," she says. "It helped keep our employees paid and kept our bills from going past due."

"We had to make a decision, whether we were going to run and stay home and just do online, or were we going to take care of our staff and realize the essentialness of our business."

She decided to keep the doors open, she says. Hours were shortened and procedures were set in place to regulate the number of people in the store, she says.

The store has one full-time employee and up to three part-time staff members.

"We had no incidents of covid on staff," Hearne says. "Our staff was very vigilant in showing up for work and making things happen."

Pyramid, founded as a print gallery in 1988 and located 1001 Wright Ave. since 2010, began selling books in 1990 and specializes in Black authors and subjects. In the wake of protests over the May 25, 2020, death of George Floyd while in police custody in Minneapolis, readers sought books by Black writers, Hearne says.

"There seemed to be a big interest in Black bookstores around the United States due to the social justice issues, so our online business increased. People were trying to understand, and started reading about it."

Among the more popular titles during the pandemic, she says, were National Book Award-winner "Stamped from the Beginning: The Definitive History of Racist Ideas in America," by Ibram X. Kendi, "Caste: The Origins of Our Discontents" by Isabel Wilkerson and Ta-Nehisi Coates' "Between the World and Me."

"Those were standards we were shipping out daily," Hearne says.

Staying open during the pandemic taught her and her staff that "you have to be versatile," Hearne says. "You've got to pivot. I learned that we are essential. A bookstore is essential, as are the arts. When things aren't going well, people tend to go inward and they appreciate art and the ability to read a book."

The store, at 5920 R St., has nine part-time employees. It closed to in-store customers for about eight weeks at the beginning of the pandemic, Lent says, limiting sales to online, call-ins, deliveries and curbside pickups.

"We still had staff in the store, filling orders," she says. There was also limited browsing by appointment.

Before reopening to in-person customers, the 2,400-square-foot store's layout was reconfigured.

"We pulled out bookcases, we opened everything up so there would be wide lanes for traffic," Lent says, adding that the store's air-filtration system was also updated.

Like many industries, publishing was hit with supply-chain problems in 2020.

"Books weren't being printed fast enough, particularly backlist books," Lent says. "And a lot of authors who had books being released in the fall got pushed to the spring because they just couldn't get them printed in time."

And speaking of supply and demand — jigsaw puzzles went flying out of the store, she says, but manufacturers and suppliers couldn't keep up and getting new stock was a challenge.

Warehouses that the store depends on to get books to them quickly were short-staffed, which meant titles weren't getting to the shelves as quickly.

Customers, however, "really stepped up and bought books," Lent says. "We have a very solid customer base, and we really stayed open because of them.

"And we got new customers. We are very grateful to people who looked around and said, 'OK, I'm going to shift my dollars from the big boys to businesses in our local community.'"

The store was also a place of interaction for people isolated during the pandemic.

"We noticed that people would call to order a book and then they would want to talk, or they would come to the store just to talk. Part of what we do is being part of that connection."

Blytheville Book Company is the current incarnation of That Bookstore in Blytheville, the legendary store opened in 1976 at 316 W. Main St., by Mary Gay Shipley.

Shipley sold the store in 2012. After a couple of ownership changes, Erin Carrington and husband Andrew bought it and reopened at 429 W. Main St., in November 2018.

"We had a little more than a year under our belt and had kind of hit our stride when the pandemic hit," Erin Carrington says.

The store, which also sells coffee, beer, wine and record albums, has three to four full- and part-time employees.

"We did not suspend operations," Carrington says. "It was at a reduced staff, and we closed our coffee bar area. The environment that we had at the store changed. It could no longer be a meeting spot for people. It was very much just a retail store at that point."

The coffee shop has reopened, though community activities such as children's story time and craft events are still on hold, Carrington says.

"We're trying to move slowly and not rush it for the safety of our staff and the community."

The store did close briefly and was run by appointment only in May after a staff member contracted the virus.

"To have it happen so recently, it shows that it is still very much a threat to our operation," Carrington says.

After just getting their bearings with the new store, covid-19 certainly threw a wrench into the Carringtons' plans, but there are valuable lessons to be learned.

"You've got to be flexible and resilient. We'd kind of worked out all the kinks and figured out how we were going to run the store. We had author signings lined up ... then the virus hit. It was disappointing, but we maintained pretty well and managed to have a decent year. It was comparable to our first year of being open. It was unfortunate timing, but I think we've managed it as well as possible."

"We were closed for part of March and April of 2020," she says of the first months of the pandemic. "We opened back up in June, but it's just now that we're starting to see a lot of our older clients out."

There was another worker at the store, but she retired during the pandemic and now Vaughn is solo.

The biggest change she made since the pandemic was reducing the hours from Monday-Saturday to Monday-Friday, she says.

Seeing the evolution of the pandemic from a retail point of view has been interesting, she says.

"At first, everybody was masked. I had a hand-sanitizer and people would use that a lot, but you can see the relaxing. People aren't as masked."

She has also noticed more tourists coming through the store in recent months.

"There have been days when it was very surprising. I've seen a lot of people who are traveling, either people who just wanted to get out or people who are able to now visit family who live nearby. It's definitely picked up."