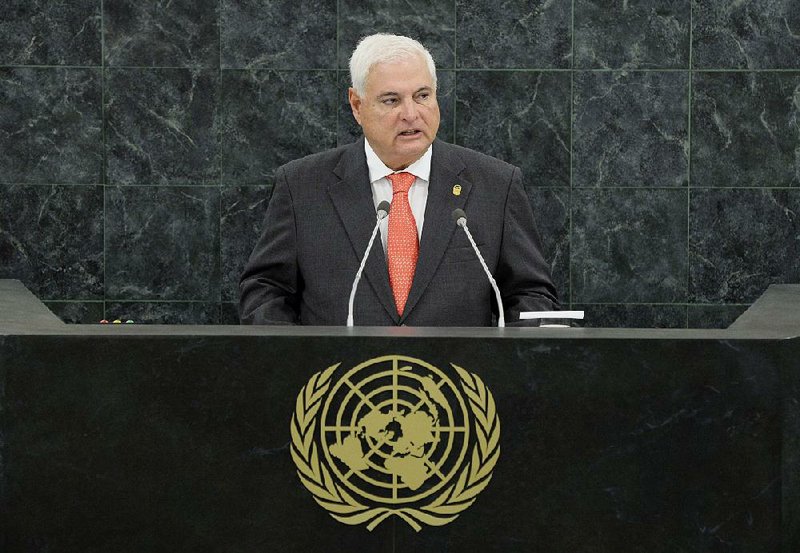 Ricardo Martinelli addresses the U.N. General Assembly on Sept. 25, 2013, when he was Panama’s president.

PANAMA CITY -- Former Panamanian President Ricardo Martinelli went on trial for a second time Wednesday on charges that he tapped the phones of opponents and journalists.

Martinelli, 69, was acquitted of similar charges in 2019.

He earned a bachelor's degree from UA in business administration in 1973. While president of Panama, Martinelli returned to Fayetteville for campus visits, and he received an honorary Doctor of Humane Letters degree from the university in 2013.

Martinelli was named to a group of approximately 150 volunteer leaders for UA's Campaign Arkansas fundraising effort, which concluded last year with a fundraising total of about $1.45 billion.

Despite Martinelli's legal troubles, the university kept Martinelli listed among its volunteer fundraising leaders. Gifts from Martinelli to UA have totaled $200,000, based on documents released by the university in 2017 under the state's public disclosure law.

Martinelli was dismissive of Wednesday's proceedings.

Noting his supermarket chain is celebrating its 35th anniversary and generates more employment and pays more taxes than any other business in Panama, he said: "I should be there working instead of attending a political trial that was already decided."

Martinelli, who governed Panama from 2009 to 2014, entered the court using a walker for stability after having back surgery last month and wearing a face mask.

In August 2019, he was acquitted on espionage and embezzlement charges and released from custody. The court found that prosecutors had violated due process after a five-month trial. The court also criticized the prosecution's evidence.

But the government won on appeal, arguing there were sufficient elements for a new trial.

As president, Martinelli allegedly spent millions of dollars on sophisticated spying equipment from Israel. Prosecutors say he intercepted communications from opposition politicians and others.