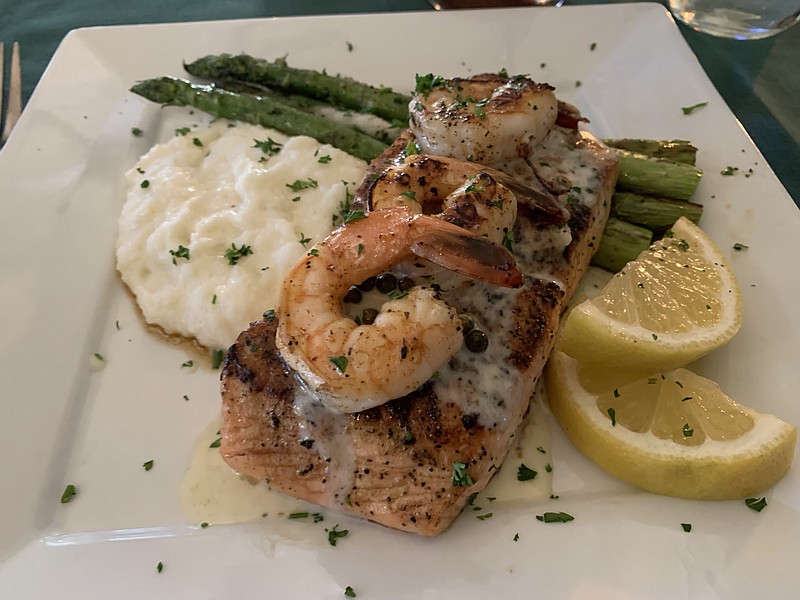 The upscale market on the curve of Kavanaugh Boulevard where it meets Van Buren Street in Little Rock's Pulaski Heights — now appropriately called Heights Corner Market (formerly Terry's Finer Foods) — has also incorporated various restaurants over the years, on one side of the market or the other.

The market's current restaurant, Walter's Green Room, now consolidates the restaurant operations back into the "penthouse" on the Cantrell Road side. The market offers a limited breakfast menu and an array of lunch sandwiches in its deli section.

Very much in keeping with the name, the decor is predominantly — one might say unremittingly — dark green: the painted brick walls, all the way up to the sloping light-wood-panel ceiling in the front and the lower ceiling of wreath-pattern metal panels in the back, over the cozy bar. Oh, and the tablecloths and napkins. 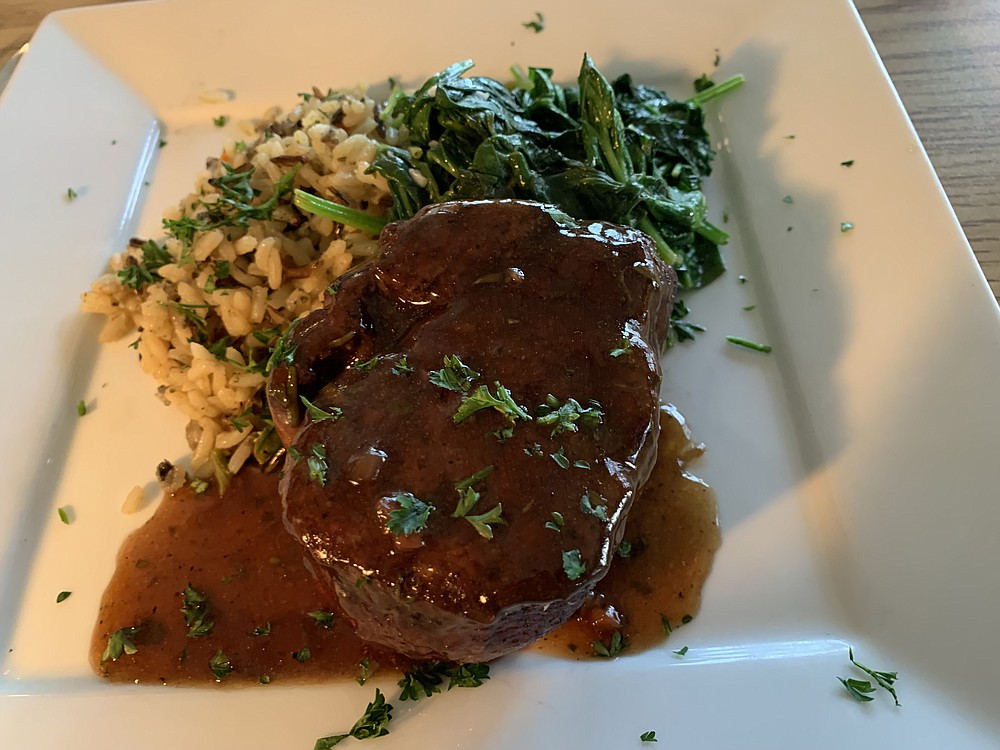 The intimate space seats about three dozen in an eclectic mix of chairs, some ornate and comfortable, others more utilitarian. Lighting is indirect, with supplementary antique lamps. On the walls and front shelves are black-and-white photos, including a big one of the late Arkansas Gazette/Democrat-Gazette columnist Richard Allin and his wife, Carol, and one of Bill Clinton at a banquet. There's a painting of a wine-bottle tree that memorializes a former decor item — an actual bottle tree.

We don't recall seeing the wickerwork dog before, but the front shelves also have several decor relics from a previous restaurant on the other side of the market (now the office of a real estate agent), including some of the "books," some stacked, some arranged vertically, with practical and philosophical messages, one line per book, on the spines (the range of sages has included John Lennon and Napoleon Dynamite).

The menu is small but high-end and well balanced, featuring relatively simple dishes done well, divided between "From the Market" (mostly prepared seafood items — fried oysters, shrimp and grits and crab cakes, but also chips and salsa and salads), "From the Butcher" (steaks, fresh fish, chicken breast and hamburger, but also encompassing, for some reason, a pasta primavera and a vegetarian dish of the day) and "From the Dessert Case" (self-explanatory).

We enjoyed very much — enough, in fact, to order it a second time, when it was again the soup of the day — the cup of French onion soup ($8), rich and onion-y and not overwhelmed with salt, with melted cheese carefully applied to two baguette slices, perhaps insufficiently toasted to qualify as croutons, though we didn't really see that as a drawback.

Our salmon ($24) was a good-size chunk, just large enough to support the three (unexpected) medium-size, well-spiced shrimp that garnished it. And it was prepared to order — if you want it as sushi, you get sushi, we guess; however, we asked that ours be cooked through, and so it was, and done well. It came topped also with a citrus beurre blanc with small capers. We chose asparagus from among the vegetables of the day; and though under ordinary circumstances we wouldn't have chosen the cheese grits over a potato or wild rice for our side starch, it somehow worked out to be an excellent accompaniment.

We did try the pleasant but not exciting wild rice on the side of our ribeye (normally $32, but on Wednesday Special Cheap Steak Night, $25; the New York strip, also normally $32, is $21.99). The beautiful piece of beef came medium rare, just as we ordered it, and leaner than we'd normally expect of a ribeye, topped with a bourbon demi-glace that enhanced rather than obscured the flavor of the steak.

On the recommendation of a member of management, we tried the excellent shrimp ceviche ($8), the "special app of the week," chunks of citrus-marinated shrimp in a glorified pico de gallo (tomatoes, onions, some garlic and plenty of cilantro), served with a starred array of crisp, thick, very lightly salted tostada chips. We consumed the last chunk of shrimp at exactly the right moment, just as we used up the last chip; it meant leaving some of the pico de gallo mixture behind in the bowl, but we didn't regret that. 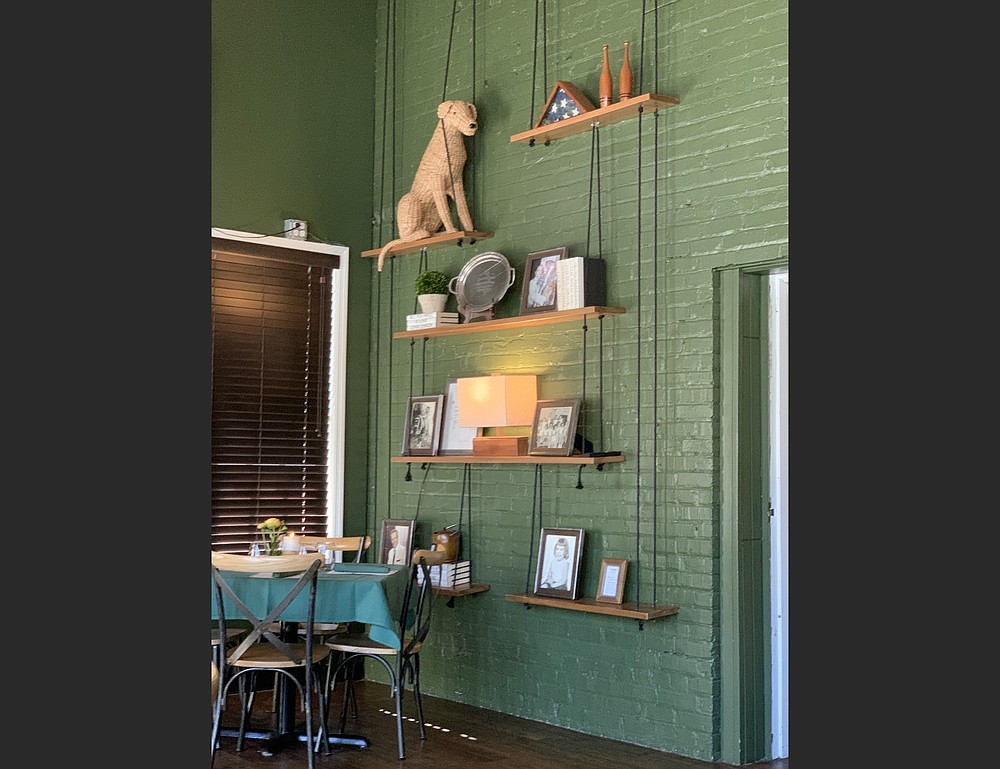 The walls, tablecloths and napkins are green at Walter's Green Room; several decor items, including a wicker-work dog and "relics" from a former restaurant appear on shelves near the front of the restaurant. (Arkansas Democrat-Gazette/Eric E. Harrison)

Crab cakes ($13), served over fried green tomatoes on a bed of lettuce, provided several unexpected results. The two crab cakes were a little chewy, with a crab-to-filler balance skewed perhaps a little more to filler than we'd prefer. The accompanying remoulade at first glance (and taste) reminded us of Thousand Island dressing, though the more of it we put on the crab cakes, the more its spiciness became evident and the more it grew on us. And the biggest surprise of all: though the cornmeal batter consistently flaked off, the fried green tomatoes were actually the best part of the dish.

We had a hard time choosing from the server's list of dessert offerings, but the Key lime pie ($6) was definitely the right choice, a decent size wedge on a graham cracker crust that was nearly perfectly balanced between sweet and tart, garnished with bits of lime zest, and with a goodly dollop of whipped cream spiked with mint leaves on the side.

Service was universally good, even though it consisted of a single server on all of our visits.