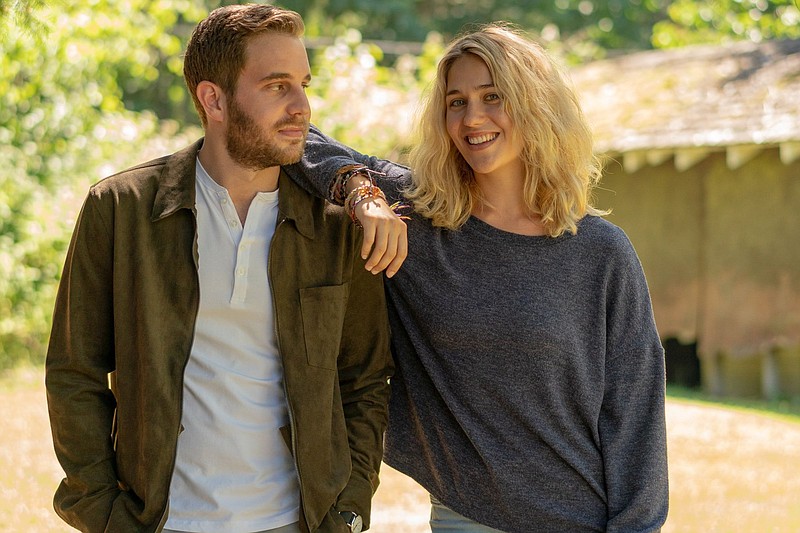 Mental illness is a difficult topic to write about. How does one capture and relay the right words to illustrate how the world is different for some people and get that experience across to readers?

How does someone thoroughly explain the inner voices that whisper their mailman is spying on them and get across how real it all seems? Now imagine trying to make a whole movie about that topic, with realistic characters and a story grounded in reality. That's the task for director Peter Sattler in his newest film, "Broken Diamonds."

The film follows a waiter named Scott (Ben Platt) with plans to move to Paris so he can write his first book. He's days away from boarding his flight and trying desperately to tidy up last-minute errands -- like securing his passport and selling his car when a call comes in. His father has died.

Reality sets in quickly, and the film reveals early on it's not going to flash many scenes of joy or happiness for the audience. Then again, this isn't a happy film designed to make people laugh or feel good about themselves. "Broken Diamonds" is a window audiences stare through uncomfortably for 90 minutes as they're shown a piece of what it's like to have a severe mental illness and try to care for someone with said illness.

Scott's sister, Cindy (Lola Kirke), suffers from schizophrenia, and after a violent incident at her assisted living home, she gets kicked out. So a surprised Scott takes her in, adding her to his list of things to tidy up before heading to Paris.

Life has been cruel to both of these characters, and it's through their experiences that viewers get to see two sides of mental illness. Scott and Cindy are two lenses that reveal different details when scanned over the photo of mental illness.

Through silent flashbacks that gradually grow more powerful as the film progresses, the audience pieces together that their father was a real bastard, abusive and failing to understand exactly what his daughter's predicament in life was. And their mother had her own struggles, developing dementia and moving away some time before the movie even starts.

Things just keep going wrong for Scott. His passport is late, and the original buyer he had lined up for his car backs out with no notice. This is one of the rare scenes where the movie earns a good dry laugh from its audience. A clearly frustrated Scott stares at a teenager who now can't buy his car.

The teen works at an ice cream store and asks Scott, "Do you want a cone for the trouble?" Scott glares at the boy for almost a full 10 seconds in silence before he finally says, "Yes I want a cone."

That's really how the restrained humor in this movie works. It's the ridiculous and yet completely believable displays of bad luck Scott experiences that will make viewers scoff and snicker as if to say, "Of course!" Because chances are those watching "Broken Diamonds" have been where Scott is or gone through something similar.

When he pulls into the carport of his apartment, Scott tells Cindy it's a tight fit and to be careful with his car door. Of course, she completely ignores him and flings the door open right into a support beam, denting it. In a later scene he does the exact same thing with his door.

The rest of the film is Scott trying his best to juggle caring for a sister who decides to go off her medication and finish any remaining errands before his flight to Paris, which serves as a driving force that gives the movie a sense of urgency.

On Cindy's side of the story, audiences witness the struggles of a woman drowning in voices that just continue growing louder when she decides not to take any more of her pills. And to top it all off, Cindy has to deal with the grief of losing a father and the reality of being reduced to an item on Scott's checklist. Schizophrenia is a hard enough burden, but how much more is it amplified when Cindy realizes her brother is rushing to build her life into a passable sandcastle before he flees, and the tide comes in to destroy it?

"Broken Diamonds" puts the broken lives of two characters on full display for audiences to witness without apology. On one side of the see-saw a young man is trying to flee every memory of his neglectful childhood. And on the other is a young woman losing her grasp on reality, convinced people are out to kill her.

It's important for cinema to highlight grounded stories of mental illness, whether it's Anthony Hopkins suffering from dementia in "The Father" or Kirke in this movie. Nearly one in five Americans lives with a mental illness, so there's plenty of need and room to tell these stories.

Hollywood has too many movies that make mental illness a gimmick for the story, from insulting pictures like "Me, Myself, and Irene" to bizarre stories like "Sucker Punch."

In one scene she felt a lamp in Scott's apartment was too bright, so she placed her scarf over the top, catching the whole lamp on fire. Scott returns to a smoky apartment, puts out the fire, and discovers his sister couldn't tell if the fire was real. And to make matters worse, the fire burned his delayed passport.

Audiences should be able to sympathize with Cindy, who is slowly losing her grasp on reality, and Scott, who feels like he has nobody to turn to for help. In one bitter scene he calls his mother in tears, asking for instructions on what to do after Cindy runs away. She tells him finding Cindy is his father's job, revealing that she'd forgotten the man was dead and highlighting her own mental health predicament once more. Scott's tears are real, and the powerful scene shows a man at the end of his rope.

A few things don't quite add up in "Broken Diamonds," the biggest being why Scott is so desperate to go to Paris so he can write his novel. He tries to explain the concept of his book only once (saying it'll be an epistolary narrative) before being cut off at a party and told he should write something like "The Da Vinci Code."

But multiple characters point out Scott can write anywhere. And the audience is never shown why he has such a fixation on Paris or how it'll help him write. The movie does a fine job convincing its audience Scott can write; iIt just doesn't explain why he has to do it in Paris.

Platt and Kirke give fine performances as siblings. There's no extraordinary chemistry between them, but they're not awkward or mismatched, either. They accomplish their primary roles in this story centered around the gravity of mental health and the toll these afflictions take on patients and caretakers.