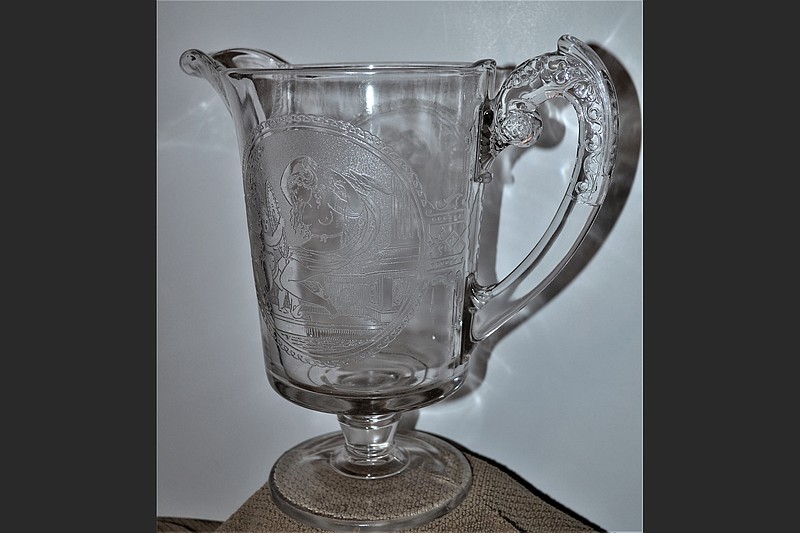 A Greek legend is molded in glass. (Reader submitted/TNS)

DEAR T.M.B.: This type of glassware goes by a variety of different names. Today it is often called by the initials "EAPG" — or Early American Pattern Glass — or just "pattern glass," or less descriptively, "pressed glass."

Pressed glass is made by taking a molten blob of glass and pushing it into a mold using a plunger. When the hot glass has cooled and the mold is removed, the object formed has a smooth interior and either a raised or indented exterior.

Sometimes these exterior patterns were floral or geometric. But sometimes they were pictorial and could depict anything or anyone from George Washington, Admiral George Dewey, famous actresses and Mephistopheles to scenic representations such as a mule-drawn wagon stalled on a railroad track, or dancing goats or pigs among the corn.

This process was first done in the United States in 1827, but its height of popularity began near 1850 and lasted for more than half a century. Many hundreds of different patterns were made, and at one time. Collecting this type of glass was a huge hobby.

Extensive collections could be found in museums such as the Houston Museum in Chattanooga, Tenn.; the Corning Museum, Corning, N.Y.; the Sandwich Glass Museum in Sandwich, Mass.; and institutions such as Berea College in Berea, Ky.

The pattern on the pitcher in today's question is known as "Psyche and Cupid." Its maker is unknown, but it is a pattern that is thought to have originated in the 1870s and was popular well into the 1880s. It can be found on a variety of different pieces, including celery vases, compotes, jam jars and covered sugar bowls, but most commonly on water pitchers.

The image on these pieces is based on "The Metamorphoses (The Golden Ass)" by Apuleius Madaurensis from the second century. In the tale, a king and queen have three daughters — one so lovely that she receives worship from mortals and makes the goddess Venus jealous.

Venus sends Cupid (or Eros) to prick Psyche with his arrow to cause her to fall in love with an unsuitable or grotesque man. Instead, Cupid accidentally pricks himself and falls madly in love with the first person he sees — Psyche. The legend goes on and on, but this is the bare bones, and it is a tale that has fascinated artists and writers for many generations.

Early American Pattern Glass tends to be most valuable when it was made in colors, but we could find no examples of this pitcher in anything other than clear, colorless glass. The pitcher, which should be about 10 inches tall, should be valued at retail in the $85 to $100 range.