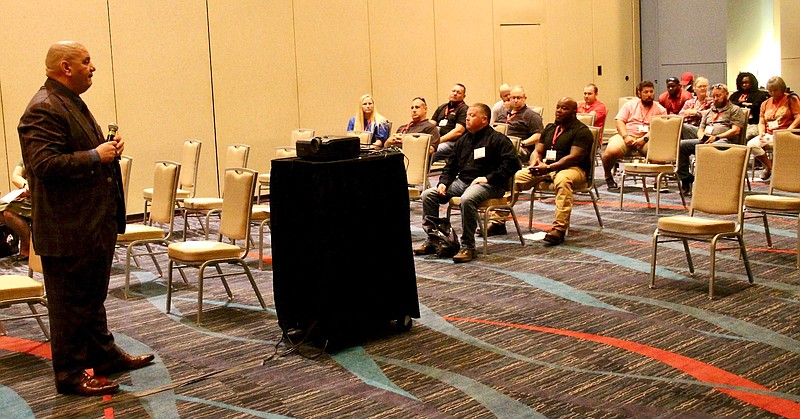 "Because of the pandemic, it has been two years since we've been able to come together and explore best practices in school safety," said Cheryl May, director of the Criminal Justice Institute. "Although we weren't together physically in 2020, we have been working behind the scenes to bring new resources and support to assist Arkansas school districts in keeping our kids and staff safe."

During the two-day conference, several courses were offered with a lineup of influential keynote speakers and presenters, such as Lisa Hamp, a survivor of the Virginia Tech shooting in 2007.

Hamp spoke about her personal story as well as her recovery and her struggle to return to a "normal' life during the weeks, months, and years that followed.

Jason Lehaman of the Long Beach, Calif., Police Department was another keynote speaker.

He is the founder of the nationally endorsed and state-certified nonprofit training organization Why'd You Stop Me, whose goal is to provide empowerment training to both police officers and the public to improve police and public legitimacy, and in turn, reduce violence during police and public contacts.

"School resource officers, educators, and administrators spend much of their daily activities communicating with youth and students in school," said Blaylock, who spoke about the importance of engaging with young people and what programs could be implemented in their schools and communities.

Thompson said he chose to take that course because the Pine Bluff department is trying to bridge the community and law enforcement gap.

"We are trying to engage with the community and let them know we are not always on the bad side," said Thompson.

"We want to be more trusting, interact and create more engagement."

Irby said there are some officers in the department who get along with everybody and are trying to figure out what they can do to make the community better.

"Right now, everybody has a see and don't see attitude and that really hurts because the way it is in Pine Bluff, it's constant shootings but nobody sees anything," said Irby, who was attending the conference for the first time. "It's making it difficult to solve a lot of the homicides and a lot of the break-ins because they don't want to tell because they are scared of retaliation."

Thompson said the department currently does not have a school resource officer and until the agency builds up its force, it's going to be a department effort.

"I will take what we learn here back to my division so they will be equipped when they have to go into the schools," he said. "We will not assign any officers to any school until we get our numbers up."

Thompson said the conference also was important to attend because of all the changes and the legislation passed by the 93rd General Assembly.

According to May, the implementation of several new laws will better ensure that students will be safer and all have an equal opportunity to reach their true academic potential.

"All schools will be required to conduct comprehensive safety audits and lockdown drills using best practices and in collaboration with local and county law enforcement agencies and emergency managers," said May.

"These acts will also raise the level of professionalism for school resources officers across the state by requiring basic training and minimum continuing education in school safety each year."

May said the legislation also prioritizes the mental health of students by requiring school counselors and resource officers to become better capable of recognizing and helping students in crisis.

Beckwith also serves as a licensed peace officer in Texas.

Beckwith said he experienced childhood trauma after his mother and sister were shot in a store robbery and said adolescents need support in processing emotions associated with grief.

"Every school should have a strategy in place to communicate and address deaths," said Beckwith, who also witnessed the death of his cousin at the age of 7 when the child was struck by a car and died instantly.

"Schools should have plans in place to support surviving students and policies established around notification and memorializing those who die," he said.

Todd said the White Hall School District and community experienced grief when Shauna Schod, a second-grade teacher at Moody Elementary and youth pastor, unexpectedly passed away in September leaving a host of family, friends, colleagues and students to mourn her.

"My son was at that elementary school so we talked about it a lot," said Todd. "I talked with the counselors and some of the kids at church that had Mrs. Schod and they were all kind of dealing with the adjustments."

Beckwith said that it is helpful to know how children understand death at different stages of development as it can vary by age and changes as a child develops emotionally and socially.

He also said their feelings may come out through behaviors such as school avoidance, poor performance in school, aggression, physical symptoms, withdrawal from friends and regression.

"Our goal is for those who interact with children to be more responsive and helpful," said Beckwith. "We must direct adolescents to a safe place to share their grief."

May said one thing organizers are trying to showcase at the conference is the implementation of Behavioral Threat Assessment Teams.

"The idea is if there is a shooting incident, there had to have been some trails of information prior to that incident occurring," said May. "It's primarily somebody that had a grievance or somebody that has a lot of stresses at home."

May said such an assessment team at the school can see if a student is acting in an unusual way and be able to try to assess a potential problem that could end up in school violence.

"When I say school violence, it's not just about a perpetrator coming in and murdering people, it's about a student hurting themselves," said May, who referred the a student's suicide in a bathroom next to the cafeteria in a school in Prescott.

"We have this other pandemic going on, but the youth today are committing suicide," said Russ Manning, president of the Arkansas Safe Schools Association and a security officer at Middleton STEAM School. "We as school resource officers, that is something we would like to prevent. We need to be looking for the signs."

Manning said school safety is a top priority. His hope is that the information learned from the conference will be taken back to each school district by the attendees and utilized to make their schools a safer environment for everyone.

"We're all passionate about our kids," said May. "We want to do everything we possibly can to make our kids as safe as possible." 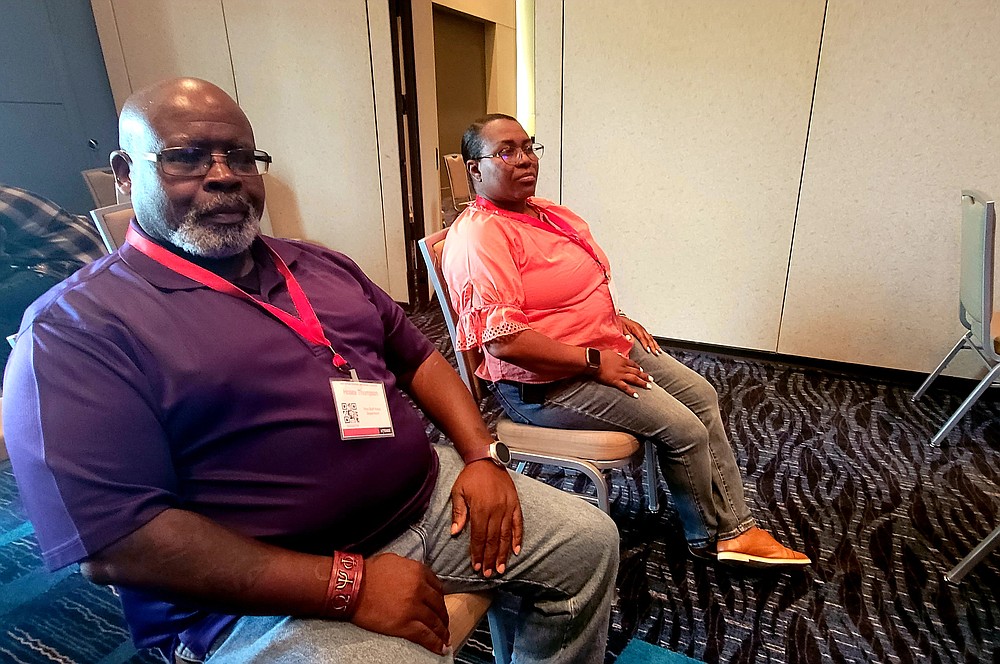