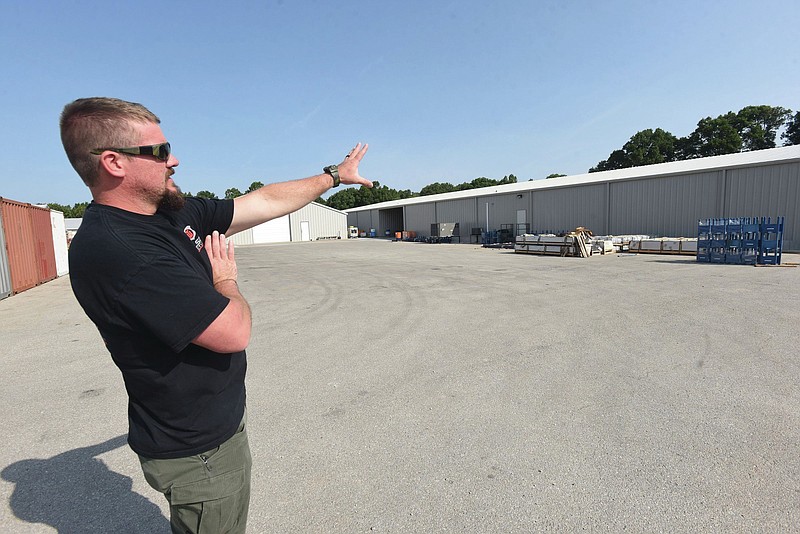 Guy Joubert with Wilson Combat gun makers shows Wednesday July 14 2021 the outside of a major expansion at the company south of Berryville. (NWA Democrat-Gazette/Flip Putthoff)

The $10 million investment includes a new 16,000-square-foot building that expands the company's total square footage to a little over 93,000 square feet over its nine-building campus. The expansion began in May of 2020 and since that time Wilson Combat has gone from about 160 employees to more than 240.

Guy Joubert, director of manufacturing at Wilson Combat, said in a recent interview that manufacturing capacity is up by 125% since the company began work on the addition and will stand at about 150% once all the new machinery is in place and working. In total, the company added 57 machines across its operations including vertical and horizontal mills, lathes, gun-barrel drills, rifling machines and reaming equipment. Some of the machines were acquired from gun-maker Remington after its July 202o bankruptcy.

"The expansion has significantly increased our production capacity in key rifle and pistol parts -- components that are our bread and butter," Joubert said.

Wilson Combat was founded in 1977 by competitive shooter Bill Wilson. The company is known for its custom 1911 pistols, AR platform rifles, shotguns, a wide variety of firearms parts and accessories, and has been expanding steadily in recent years.

According to the National Shooting Sports Foundation's Firearms and Ammunition Industry Economic Impact Report 2021, there were nearly 153,500 U.S. jobs attributed directly to the firearms industry in 2020, with wages of $7.1 billion and total economic impact of $25.5 billion. In Arkansas, the study pegs direct jobs at 3,423 with wages of $135.5 million. The report notes Arkansas ranks third in total economic output per capita and seventh for total industry jobs per capita.

Joubert said sales are through the roof at Wilson and the company has been doing everything it can to keep up with the unprecedented demand. The National shooting Sports Foundation's report said record firearms sales in 2020 included 8.4 million first-time gun buyers.

Annual background checks of firearms buyers are on track to break records yet again for 2021 with about 22.2 million through June, compared with about 19.2 million for the same period last year. In 2020, records were shattered, with 39.69 million total background checks, a 40% increase over 2019's previous record. While the FBI background-check figures don't represent the number of guns sold, they are generally used as indicators of firearms demand.

Two Arkansas ammunition makers have seen their operations expand in the face of red-hot demand over the past year.

New Hampshire-based firearms and ammo maker Sig Sauer said last month that it will be expanding its Jacksonville plant to double production of pistol ammo and plans to add a primer-making operation. The plant makes small-arms ammunition for the civilian, law enforcement and military markets worldwide. The company also builds night sights for its firearms at the plant, which sits on more than 60 acres.

Vista Outdoor, the new parent company of Remington Ammunition, with its ammo plant in Lonoke, said recently it's continuing to hire workers as it attempts to keep up with consumer demand. The plant employs about 900 people. Chris Metz, chief executive officer of Vista Outdoor, has said the company's ammunition order backlog is valued at more than $1 billion.

In October, Minnesota-based Vista Outdoor purchased Remington's ammunition plant, the brand and various trademarks for $81.4 million during Remington's bankruptcy. According to the IBIS World report, Vista Outdoor, which also includes the Federal, CCI and Speer brands, commands about 8% market share in the segment.

Joubert from Wilson Combat said the new machinery will not only allow the company to make more key components for the pistols and rifles it builds but also it will free up capacity to focus on parts that tend to have less demand but that are still important to the company's customers. 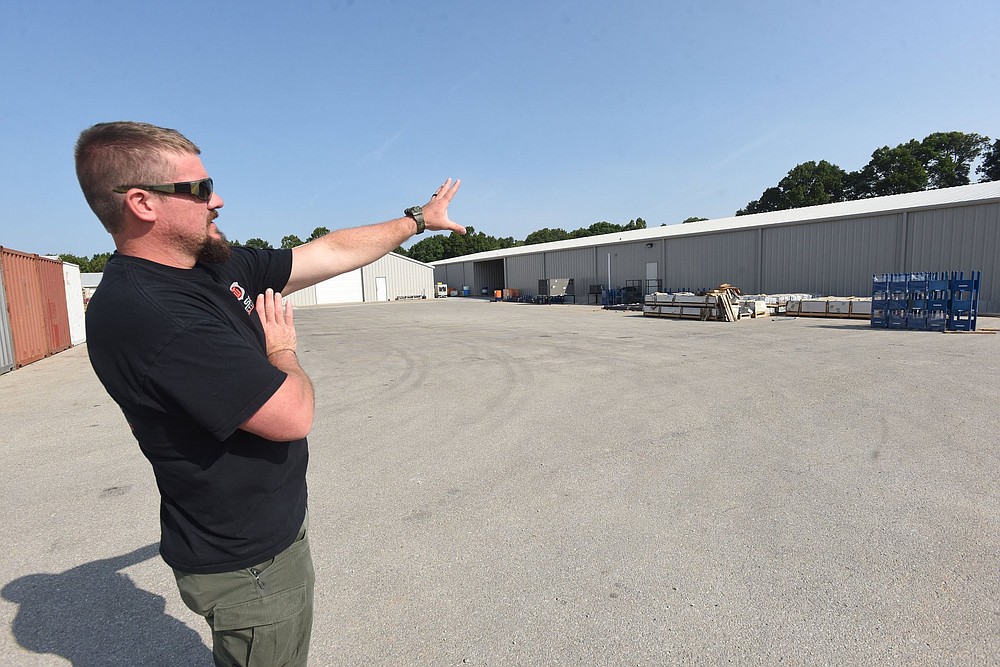 Guy Joubert with Wilson Combat gun makers shows Wednesday July 14 2021 the outside of a major expansion at the company south of Berryville. (NWA Democrat-Gazette/Flip Putthoff) 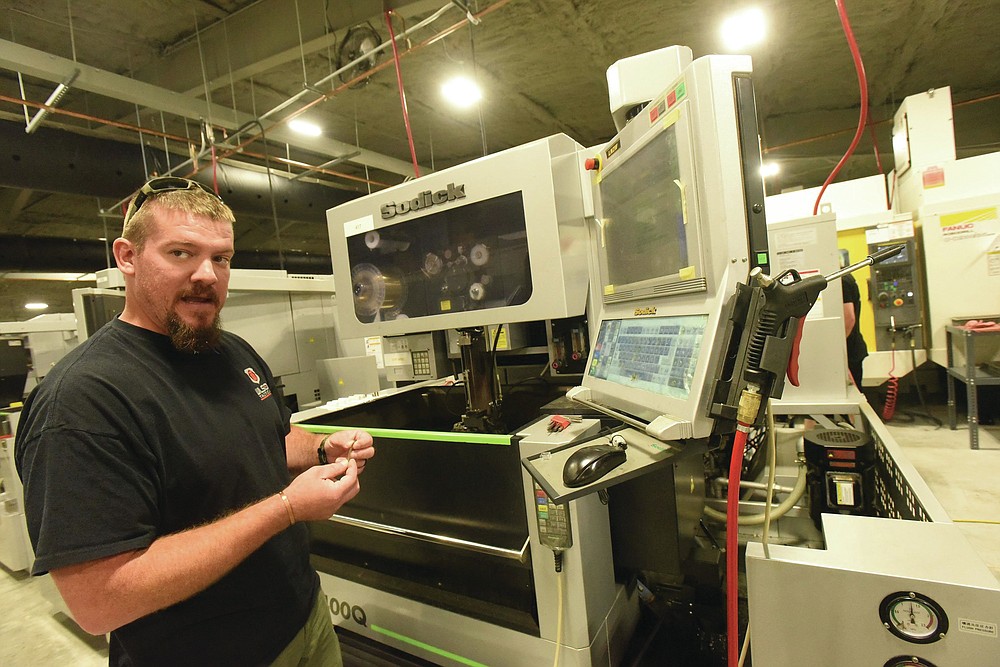 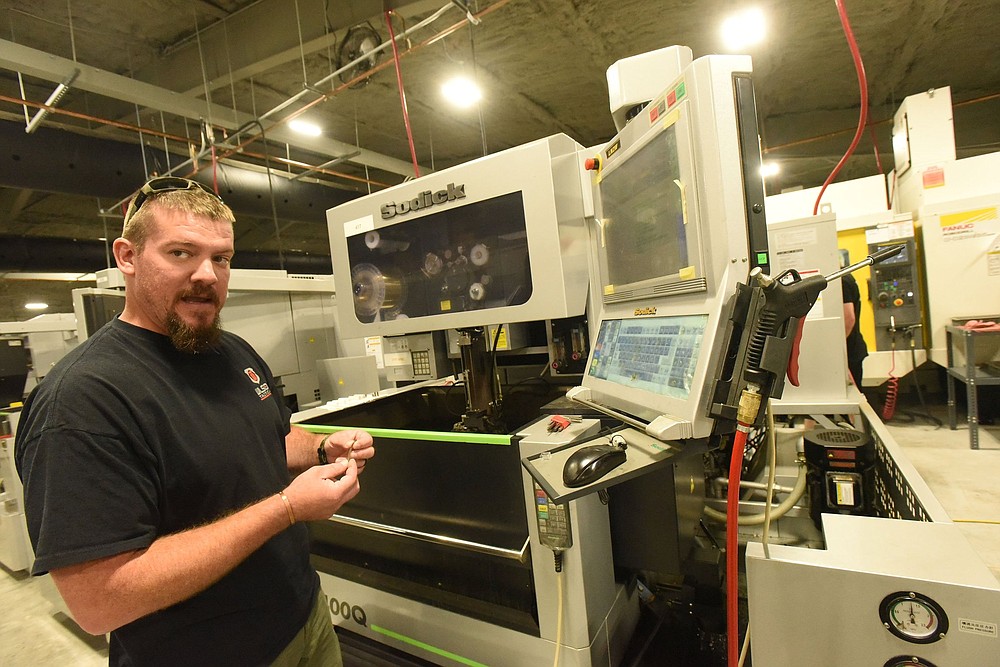