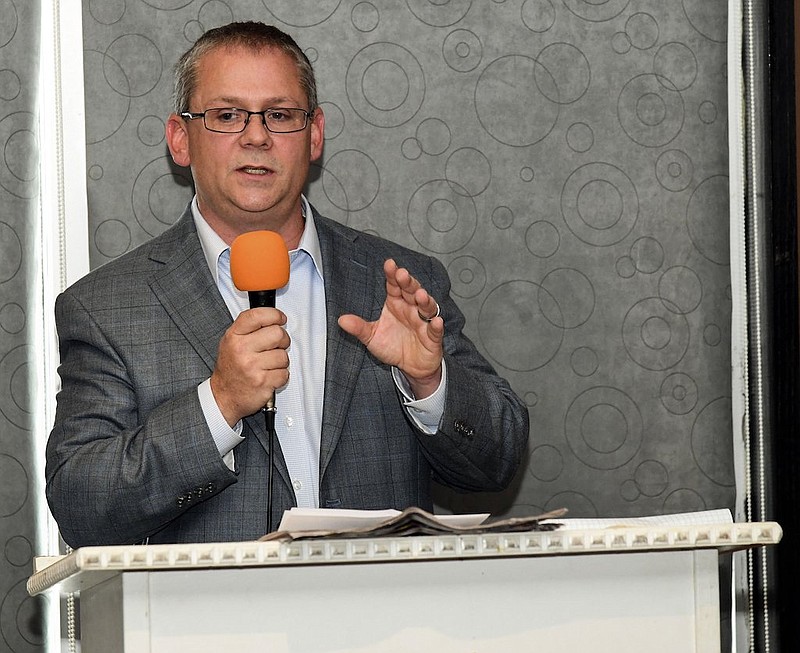 Arkansas Secretary of State John Thurston was the guest speaker Sept. 18 at the Garland County TEA Party meeting. The TEA Party meets at noon Wednesdays at the Hibachi Sushi Buffet in Temperance Hill. - Photo by Grace Brown of The Sentinel-Record

The candidate filing period for the Nov. 2 school board elections begins this week -- amid some confusion about the actual first couple of days of it.

The Arkansas School Boards Association is recommending that candidates not file before Wednesday. It says the filing period begins at noon Wednesday and ends at noon, Aug. 4

That is contrary to an Arkansas education commissioner's memorandum from March that set the candidate filing period for the Nov. 2 election as from noon Monday through noon Aug. 2.

State law gives school districts a choice of spring or November elections. While a majority of Arkansas' more than 230 traditional school districts hold their elections in the spring, there are others that use the November date, which in even-numbered years coincides with the general election for state and local offices.

The conflict in the school board candidate filing dates -- which prompted a recent request for an opinion from the Arkansas attorney general's office, stems from Act 349 of 2021 and its effective date, said Lucas Harder, policy service model and director for the Arkansas School Boards Association.

Act 349 tweaked an existing law on the school board candidate filing dates -- but the revised law doesn't go into effect until this week, Harder said last week.

More specifically, the language in the current law directed that a one-week filing period was to end at noon Aug. 1, which this year is a Sunday when county government offices are generally closed.

Act 349 revised the language to establish a one-week filing period "ending at 12 noon 90 days before the general election."

"The issue is that Act 349 changed the start and end date of the filing period," Harder said.

"The question was 'Do July 26 and 27 count as days on which candidates can legally file?'" Harder said.

"Our recommendation for school board members, or anyone who is running, is to wait until [July] 28th to file because we know those dates are good," he said. "If they submit filings on the 26th and 27th, it's at their own risk" in regard to whether the filings will be valid.

Asked about the Arkansas Department of Education's earlier memo containing the July 26-Aug 2 filing dates, Harder said he doesn't believe the state agency is in disagreement with the revised dates "but just didn't update the memo." He suggested that an update might come after the revised law goes into effect.

Lori Freno, general counsel for the Education Department, last week referred questions about the candidate filing dates and school board election issues in general to Harder.

Arkansas Secretary of State John Thurston asked Attorney General Leslie Rutledge for an opinion on the July 28-to-Aug. 4 school board filing period for the November election. He also pointed out that the new law requires the close of the filing period to be 90 days "before the general election," but there is not a general election in odd-numbered years.

"A strong argument can be made in favor of the construction you posit," the attorney general responded to Thurston in the opinion released last week.

The opinion also stated that it appears from the reading of the new law that a reference to a "general election" was a "drafting error" that could be corrected by saying -- as Thurston had suggested -- 90 days before all November elections. November elections are always on the first Tuesday after the first Monday in November, the opinion noted.

"However, I cannot predict with certainty whether an Arkansas court would agree," the opinion signed by Rutledge says. "Legislative clarification is necessary to definitively resolve the matter."

In Pulaski County, school board elections will be held for four of the seven seats on the North Little Rock School Board.

Last week, North Little Rock School Board President Cindy Temple said she intends to file as a candidate for reelection to the board's Zone 5 seat, and School Board member Tracy Steele said he will file for election to a third term to the Zone 2 seat.

Temple is vice president of SP Environmental. She has been on the School Board since her appointment in 2017. She was elected in 2018.

Steele is director of the Arkansas Health Services Permit Agency. He is a former state legislator and an unsuccessful candidate for North Little Rock mayor.

In the Pulaski County Special district, School Board President Linda Remele of Sherwood's Zone 3 said she will decide later this week on her election plans. Remele, a retired educator in the district, has been the board's president for five years.

Board member Brian Maune, who holds the Zone 7 seat representing west Pulaski County, said last week that he had not yet decided whether to run for reelection. Maune, a father of four school-aged children and two preschool children, is an account manager for ChemTreat.

Both Maune and Remele have served one five-year term and were members of the district's Citizens Advisory Committee before their 2016 elections.

The nine-member Little Rock School Board was elected in its entirety last November and December, and will not have an election on School Board members until November 2022.

While there will be no candidates on the ballot this year, the Little Rock board is considering the placement of a proposed property tax extension on the November school election ballot. A School Board decision on that ballot issue is expected in August.