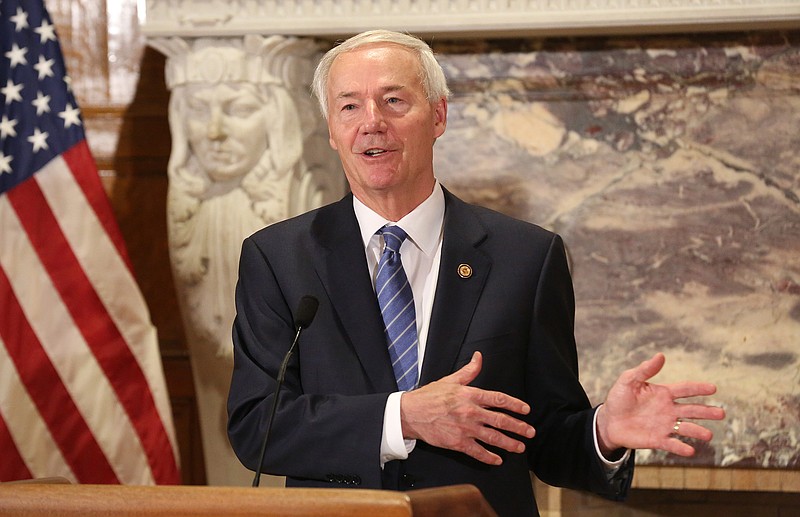 With Arkansas' coronavirus cases and hospitalizations continuing to surge, Gov. Asa Hutchinson said Monday that he plans to talk with legislative leaders today about the law that will prohibit public schools and other government entities from requiring people to wear masks when it takes effect Wednesday.

"I think from a conservative standpoint, you certainly can make the point that local school districts ought to be able to make their own decisions as to what is in the best health of their students," Hutchinson said during a discussion with residents in Mountain Home about the coronavirus vaccines.

The governor's comments came as the number of people hospitalized with covid-19 in Arkansas jumped Monday by 61, to 980, its highest level since late January, while the state's count of cases rose by 621.

The state's death toll from the virus, as tracked by the Department of Health, rose by 23, to 6,077.

It was the largest one-day increase in the toll since March 12.

With the start of the 2021-22 school year for public schools weeks away, some Democratic lawmakers last week called for a legislative session to lift Act 1002's ban on government mask mandates.

House Speaker Matthew Shepherd, R-El Dorado, and Senate President Pro Tempore Jimmy Hickey, R-Texarkana, said Monday that they were having conversations with other legislators to gauge their interest in addressing the matter.

"The hard and fast question is, is there support to revisit the issue from a legislative standpoint?" Shepherd said. "My focus has really been on gathering information, listening to the members."

Hickey said the resolution the Legislature approved when it went into extended recess in April does not allow it to reconvene to consider the mask mandate prohibition without a special session.

The resolution states that the president pro tempore of the Senate and the speaker of the House of Representatives may, by joint proclamation, reconvene the General Assembly at any time for the purpose of "considering legislation related to the covid-19 public health emergency and distribution of covid-19 relief funds."

Hickey said he asked for that language in case more guidance regarding American Rescue Plan funds was issued, and it only applies to considering matters related to covid-19 relief funds, not the pandemic in general.

Shepherd said he hadn't drawn a conclusion on whether the resolution allowed the Legislature to reconvene without a special session.

He said a few members had reached out to him about the possibility of reconvening, referencing a letter last week from 12 Democrats urging Hutchinson, House and Senate leaders, and other lawmakers to support an immediate call for a legislative session "to lift the ban on mask mandates in a manner that respects the will of the Legislature, the health of our people, and the importance of locally informed responses." Senate Minority Leader Keith Ingram of West Memphis also urged reconsideration of the law.

Shepherd said other members didn't think any action needed to be taken.

"There's a lot of talk out here as far as that law that was passed during the session," Hickey said.

He noted that any change to the legislation would not go into effect until 90 days after it passed without an emergency clause, which would require two-thirds approval.

In a statement Monday, Arkansas Advocates for Children and Families said Hutchinson "should consider" asking lawmakers to repeal Act 1002 as well as Act 977, which prohibits state agencies and local government entities, including public schools, from requiring coronavirus vaccinations.

State-owned medical facilities are allowed to require vaccinations with the approval of the Legislative Council.

"Repealing, or at least significantly amending Act 977 and Act 1002 are the strongest steps the legislature could take to deal with the current crisis and future surges in cases more effectively," the advocacy group said.

The group also said the Legislature should give Hutchinson "greater authority to deal with the pandemic and new surges in COVID-19 cases" and that the governor should "consider using his new emergency powers to take immediate steps, such as new mask or vaccination mandates, to deal with the crisis."

The group also said legislators should encourage residents to wear masks and get vaccinated and ask businesses to impose mask requirements.

It said the state should "make equity a greater focus" in its pandemic response and have a plan ready for when children younger than 12 are allowed to be vaccinated.

It also called for more action by the federal government in Arkansas and other states with low vaccination rates, and it endorsed guidelines for schools issued last week by the American Academy of Pediatrics, which included a recommendation that all children older than 2 be required to wear masks.

"The COVID-19 pandemic is on such a massive scale, we cannot rely on individual Arkansans alone to defeat it," Arkansas Advocates for Children and Families said in the statement.

"We need the Governor and the Legislature to take fast action to protect our state, and we need to collectively hold them accountable.

Whether the prohibition on mask mandates will stay in place "remains to be seen," Hutchinson said.

With Act 1002 in place, Hutchinson said children can best be protected by "everybody getting vaccinated around them."

He said the state will issue its own guidelines for schools today.

"We do believe it will be an incentive for those going to school that if you're vaccinated, you don't have to quarantine if you're exposed" to someone with the virus, Hutchinson said.

He said officials are also considering quarantine guidelines for schools that will take mask use into account, and he noted that schools are receiving federal funds that can be used on protective measures such as improving ventilation.

Hutchinson was at Arkansas State University-Mountain Home on Monday morning hosting one of a series of "community covid conversations" he has been holding around the state to encourage vaccinations.

It was contentious at times, with a few people shouting in disagreement as state Epidemiologist Jennifer Dillaha rebutted the claim that the vaccines can affect fertility.

"There is no medical evidence at this time that the covid vaccines impact fertility," Dillaha said. "There is a great deal of evidence that the covid illness itself causes problems with pregnancy and fetal demise."

The Baxter Bulletin reported on its website that members of a group called the Ozark Patriots held up signs with messages opposing vaccine mandates and handed out flyers "containing information from various online sources."

Ron Peterson, CEO of Baxter Regional Medical Center, said at the meeting that the hospital had so many covid-19 patients in its intensive care unit that it had to postpone two open-heart surgeries that had been scheduled for this week.

The hospital had a total of 33 covid-19 patients on Monday.

About 90% of them had not been vaccinated, he said.

"I don't know how far this is going, but it's going to get very scary, I believe, because we don't know where it peaks," Peterson said.

Monday was the 21st daily increase in a row in the number of covid-19 patients in Arkansas hospitals. The increase brought the number to its highest level since Jan. 28.

The number of virus patients who were on ventilators, however, fell by one, to 172.

"During the first phase of COVID-19, hospitalizations generally went down over the weekend," Hutchinson said in a tweet.

"The increase of 61 hospitalizations on Sunday is a blunt indicator that the Delta Variant is more transmissible & increases the likelihood of hospitalizations if you don't have the vaccine."

UAMS spokeswoman Leslie Taylor said 22 of the patients were in intensive care, 15 were on ventilators and five were on heart-lung bypass machines.

She said about eight of the patients, all with other health conditions in addition to covid-19, had been vaccinated.

"We can add beds, but staffing is also a big problem for us," Taylor said.

At Baptist Health's 11 hospitals around the state, available beds "continue to be extremely limited," spokeswoman Cara Wade said in an email.

She said the hospitals had 218 patients, 90% of whom had not been fully vaccinated.

Three of the patients in Little Rock were on ventilators, she said.

The increase in cases on Monday was larger by 78 than the one the previous Monday.

Already at its highest level since Feb. 9, the average daily increase in the state's case count rose to 1,548.

With recoveries outpacing new cases, however, the number of cases that were considered active fell by 650, to 14,627.

According to a Health Department report, the number of cases identified as having been caused by the delta variant, which first emerged in India, rose last week by 251, to 668.

The number found to have been caused by alpha variant from the United Kingdom rose by 30, to 518.

The state also reported one new case known to have been caused by the gamma variant first seen in Brazil.

The number of cases known to have been caused by the iota variant from New York also increased by one, to 21.

Meanwhile, 3,594, the increase in vaccine doses that providers reported having administered, including second doses of the Pfizer and Moderna vaccines, was larger by more than 900 than the one a week earlier.

Already at its highest level since the week ending May 16, the average number of doses administered each day over a rolling-seven day period rose to 8,986.

People receiving their first vaccine doses appear to be driving the uptick.

According to the U.S. Centers for Disease Control and Prevention, the number of Arkansans who had received at least one dose rose Monday by 4,776.

That was larger by more than 1,000 than the increase a week earlier.

The average daily increase in the number of Arkansans who had received at least one dose rose Monday to 6,646, its highest level since at least February.

After ranking 45th for weeks in the percentage of its residents who had received at least one vaccine dose, CDC data on Monday showed that Arkansas had moved up to No. 43.

Arkansas continued to rank 49th, however, ahead of only Mississippi and Alabama, in the percentage who had been fully vaccinated.

Scott Hardin, a spokesman for the state Department of Finance and Administration, said the number of people cashing in scratch-off lottery tickets that were given out as rewards for receiving a vaccine dose has also been on the rise, likely due to the news last week that a Texas man who had been visiting family in Arkansas won $1 million from one of the tickets.

Hutchinson announced in late May that Arkansans who received a vaccine dose May 26 or after would be eligible for one of the lottery tickets or a pair of gift certificates for hunting and fishing licenses worth a total of $21.

He said the state was buying 50,000 lottery tickets and 50,000 pairs of gift certificates and could buy more if the incentives proved effective.

Health Department spokeswoman Danyelle McNeill said 4,946 lottery tickets and 2,001 Game and Fish Commission gift certificates had been given out as of Monday.

Aside from the $1 million ticket, the largest amount someone has won from one of the tickets is $500. Twenty-four people had won that amount as of Monday.

Dillaha said all but one of the deaths reported Monday happened within the past month.

Dillaha said 14.1% of the state's coronavirus tests were positive during the week ending Sunday.

The state's cumulative count of cases rose Monday to 375,971.

The number of people who have ever been hospitalized in the state with confirmed infections grew by 66, to 18,185.

The number who have ever been on a ventilator rose by nine, to 1,848.