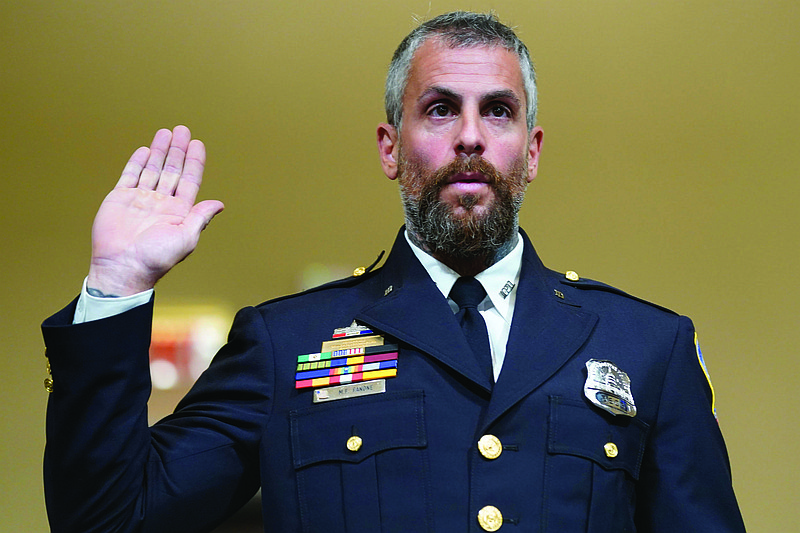 WASHINGTON -- Four police officers delivered emotional testimony Tuesday about the physical and verbal abuse they endured defending the Capitol on Jan. 6 from a mob of supporters of President Donald Trump, as a House select committee held its first hearing on the insurrection.

One officer described how rioters attempted to gouge out his eye and called him a traitor as they sought to invade the Capitol. Another told of being smashed in a doorway and nearly crushed as he heard guttural screams of pain around him from fellow officers. A third said he was beaten unconscious and struck repeatedly with a Taser as he pleaded with the mob, "I have kids." A fourth relayed how he was called a racist slur over and over again.

[Video not showing up above? Click here to watch » https://www.youtube.com/watch?v=lZVvZYMWVYQ]

"All of them -- all of them were telling us 'Trump sent us,'" Aquilino A. Gonell, a Capitol Police sergeant, testified to the Select Committee to Investigate the January 6th Attack on the U.S. Capitol.

More than six months after the assault, the testimony by uniformed officers provided gripping first-person narratives that brought home the harrowing events of Jan. 6, when Trump's supporters stormed the Capitol to disrupt the official counting of electoral votes to formalize President Joe Biden's victory.

The select committee's members believe the first-person accounts of such intensely traumatic experiences will resonate with the American public, cutting through the bitter political war in Congress over how the Capitol riot should be investigated -- and who bears responsibility for it.

Republican leaders have boycotted the investigation and sought to blame House Speaker Nancy Pelosi, D-Calif., for the casualties as a way of deflecting scrutiny from Trump, who was impeached and acquitted earlier this year on charges that he incited the crowd.

House Republican leaders who have opposed efforts to investigate the assault boycotted the inquiry and dismissed it as a partisan ploy, so they were absent as the officers recounted in emotional terms what they experienced that day, reliving their trauma in a Capitol Hill hearing room.

Capitol Police officer Harry Dunn said one group of rioters, perhaps 20 people, screamed the n-word at him as he was trying to keep them from breaching the House chamber -- racial insults he said he had never experienced while in uniform. At the end of that day, he sat down in the Capitol Rotunda and sobbed.

"I became very emotional and began yelling, 'How the [expletive] can something like this happen?" Dunn testified. "Is this America?"

"My blood is red," he said. "I'm an American citizen. I'm a police officer. I'm a peace officer."

Gonell, a naturalized American citizen and Iraq War veteran who required surgery to repair the injuries he suffered during the incursion, wept as he explained how he couldn't even hug his wife upon returning home, fearing the chemicals that had seeped into his clothes and were burning his skin would make her sick, too.

"To be honest, I did not recognize my fellow citizens who stormed the Capitol on Jan. 6, or the United States they represent," he testified. "Nothing in my experience in the Army, or as a law enforcement officer, prepared me for what we confronted."

The testimony, punctuated by video montages of the rampage -- including some footage from the body-worn cameras of police officers who testified -- was an undeniable reminder of the reality of the day.

Lawmakers and officers alike grew emotional as they grappled with the implications of what unfolded and expressed anger at the attempts of many Republicans to downplay or deny it.

"We still don't know exactly what happened," said Rep. Adam Kinzinger of Illinois, one of two Republicans afforded a seat on the panel by Pelosi. "Why? Because many in my party have treated this as just another partisan fight. It's toxic, and it's a disservice to the officers' families."

Democrats opened the hearing, which lasted for several hours, by playing previously unreleased video of the assault. The voices of rioters could be heard calmly directing the assault via radios as police officers could be heard on their own channels issuing panicked distress calls.

"A violent mob was pointed toward the Capitol and told to win a trial by combat," Rep. Bennie G. Thompson, the chairman of the panel, said as he opened the session. "Some descended on this city with clear plans to disrupt our democracy. One rioter said that they weren't there to commit violence, but that, and I'm quoting, 'We were just there to overthrow the government.'"

The hearing was the latest indication of how Republicans have worked to thwart attempts to investigate the Jan. 6 attack, fearing its political implications for their party and Trump, to whom many of them remain loyal. Earlier efforts to set up an independent commission of experts, equally weighted between Democratic and GOP appointees, faltered in the Senate.

Rep. Liz Cheney of Wyoming, the other Republican whom Pelosi chose to serve on the panel, said she was "obligated to rise above politics" and participate. A leading critic of Trump who was booted from her Republican leadership post for speaking out about his election lies, she pledged quick subpoenas to uncover any potential ties among the rioters and the Trump administration and campaign.

"We cannot leave the violence of Jan. 6th and its causes un-investigated," Cheney said. "We must also know what happened every minute of that day in the White House -- every phone call, every conversation, every meeting leading up to, during, and after the attack."

But Tuesday, the hearing focused on the nightmare experienced by the police officers who responded that day.

Michael Fanone -- a District of Columbia Metropolitan Police officer who was beaten unconscious and subjected to repeated shocks with his own Taser by the mob, suffering a heart attack and a brain injury -- said he heard rioters calling for him to be killed with his own gun.

Lawmakers played Fanone's body-worn camera video, in which he can be heard pleading for mercy -- "I have kids," he mutters -- before being carried off by fellow officers and losing consciousness. He and the other officers expressed feelings of betrayal at the Republicans who have dismissed the violence.

"I feel like I went to hell and back to protect them and the people in this room," Fanone testified, pounding his fist on the table in front of him. "Too many are now telling me that hell doesn't exist or that hell actually wasn't that bad. The indifference shown to my colleagues is disgraceful."

Officer Daniel Hodges, another member of the Metropolitan Police, described how the mob descended into "terrorism," booing and mocking the police as they flew American, Christian and Trump flags.

As he was crushed in a door, rioters bashed him in the head, one attempting to gouge out his eye, he said.

Hodges described the attack as a "white nationalist insurrection" but said he held his fire because the few hundreds of officers defending the Capitol would have been outgunned by the thousands in the mob.

The lawmakers on the committee grew emotional as they played videos of the violence and repeatedly thanked the police for protecting them.

Kinzinger shed tears during his questioning. He said he hadn't expected to become so emotional.

"You guys all talk about the effects you have to deal with, and you talk about the impact of that day," Kinzinger told the officers. "But you guys won. You guys held."

Rep. Kevin McCarthy, R-Calif., the majority leader, withdrew all five of the Republicans he had recommended for the panel after Pelosi rejected two of his selections who were close allies of Trump's and who had repeated his false election claims and had disparaged the inquiry.

Pelosi objected to McCarthy's attempts to seat Reps. Jim Bank, R-Ind., and Jim Jordan, R-Ohio, because the two had made incendiary statements undermining the premise of the probe, Democrats said last week. They also expressed concern about Jordan because his pre-riot contacts with Trump make him a potential witness in the investigation.

McCarthy, Jordan and other GOP leaders have resisted the idea of any special panel to investigate the Capitol riot, charging that each proposal was too biased in favor of Democrats to give Trump a fair shake.

On Tuesday, they sought to preempt the special committee's first hearing with a news conference in which they accused Pelosi of "bearing responsibility" for the attack by not having better steeled the Capitol for such things, and refusing to appoint McCarthy's special committee picks because they would have scrutinized her office and "she didn't want those questions asked."

Congressional leaders hire the law enforcement personnel responsible for Capitol security but are typically not involved in day-to-day decisions about security protocols. Security at the Capitol is controlled by the Capitol Police Board, which includes the House and Senate sergeants-at-arms and the architect of the Capitol.

On Tuesday afternoon, Trump supporters Reps. Matt Gaetz, R-Fla., Marjorie Taylor Greene, R-Ga., and others held a protest at the Justice Department to complain about the detention conditions where people are being held for their alleged participation in the assault. To date, more than 550 people have been charged with federal crimes, including more than 165 who are accused of assaulting or impeding law enforcement.

After the hearing, Thompson said the probe could move forward urgently, with subpoenas "soon." The investigation is expected to examine not only Trump's role in the insurrection but also the groups involved in coordinating it.

The probe will also look at security failures that allowed hundreds of people to breach the Capitol and send lawmakers running for their lives. Some of those who broke in were calling for the deaths of Pelosi and Vice President Mike Pence, who was hiding just feet away from the mob.

Capitol Police have repeatedly said they are hamstrung by a lack of funding. Senate leaders said Tuesday that they had reached a deal on a $2.1 billion emergency spending bill that could provide more resources.

Information for this article was contributed by Luke Broadwater of The New York Times; by Mary Clare Jalonick, Nomaan Merchant, Brian Slodysko, Eric Tucker, Kevin Freking, Padmananda Rama and Aaron Morrison of The Associated Press; and by Karoun Demirjian, Marianna Sotomayor, Jacqueline Alemany and Marianna Alfaro of The Washington Post.