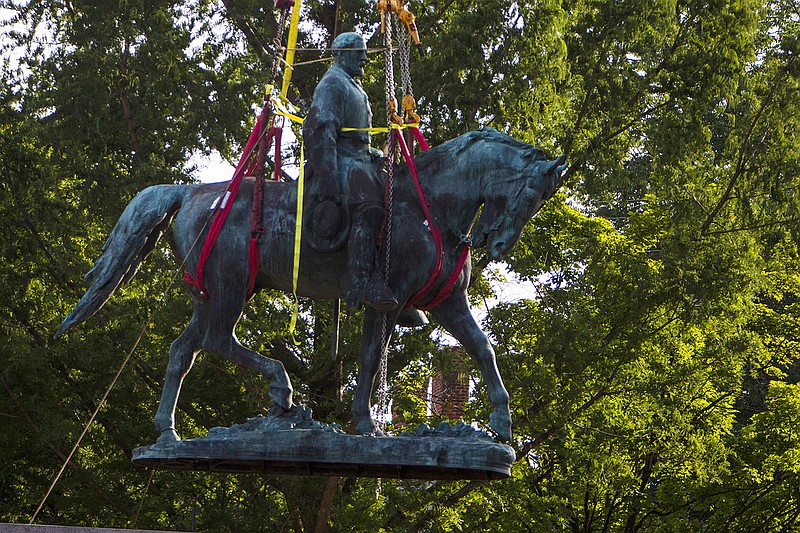 A Hot Springs man who inquired about purchasing a Gen. Robert E. Lee statue removed from Charlottesville, Va., earlier this month says a misunderstanding created a false belief that the request was from Hot Springs National Park.

Howard Kilby, 77, said Wednesday that he made a simple inquiry about the Confederate statue, which is one of two the city of Charlottesville removed after a court battle that ended with a Virginia Supreme Court ruling in April.

The decision came after a long court battle that prohibited the city from removing the statues after violent white nationalist protests in 2017.

White supremacist and neo-Nazi organizers of the August 2017 "Unite the Right" rally in Charlottesville said they went to the city to defend the statue of Lee. They clashed with counterprotesters before a white supremacist plowed his car into a crowd of people, killing 32-year-old Heather Heyer.

The city hasn't made a decision on destroying or selling the statues but began collecting "expressions of interest" recently, according to a news release from the city. A list released by the city shows that at least 30 organizations and citizens have inquired about the statues.

Some of those on the list are identified as citizen requests and others as organizations.

Kilby's inquiry is listed as Hot Springs National Park, but an email from Kilby simply states, "Is the statue of Robert E. Lee for sale?"

"I have always referred to this city as Hot Springs National Park, Arkansas," Kilby said Wednesday. "We were always proud that it was a national park. I have always used it on my check. ... And that's where the misunderstanding began."

Hot Springs National Park Superintendent Laura Miller told The Sentinel-Record on Tuesday that she hadn't heard about the statue request. It was unknown at that time that Kilby had sent the request.

"I'm not sure where it's coming from, but we have no intention of acquiring statues for Hot Springs National Park," Miller told the newspaper.

Kilby said he wanted the statue personally and had no intention of it being placed in the park. He said he grew up with great admiration for Lee along with George Washington and Thomas Jefferson.

"The cancel culture is not going to be satisfied with trashing the South and Confederate monuments," Kilby said Wednesday. "What is going to stop it from the Washington and the Jefferson monuments being torn down as well."

Organizations listed on the document released by the city include the Jim Crow Museum, Gettysburg Sculpture Museum and LAXART museum.

The Charlottesville City Council still has not decided whether ownership of the statues should be transferred to a museum or other entity or whether the statues should be demolished. The city said July 13 that it would continue to accept statements of interest from entities interested in acquiring them.

In early September, the mayor will conduct outreach with the interested parties to further evaluate their interest and resources.