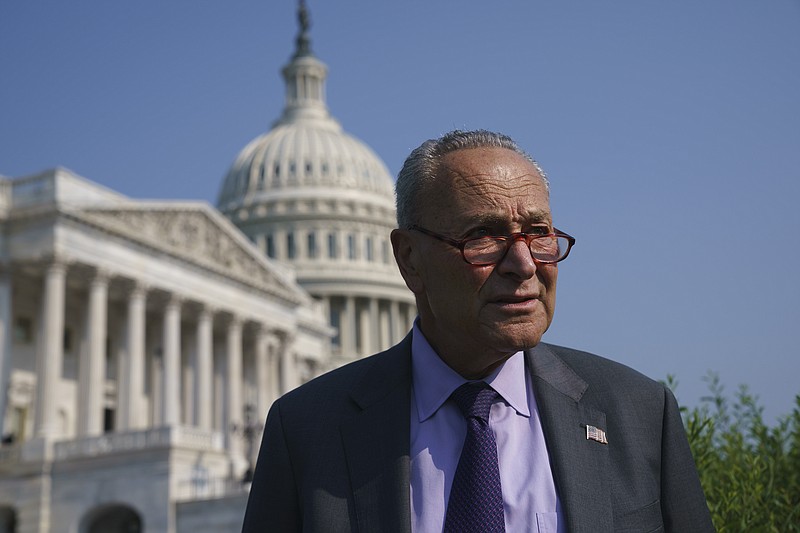 WASHINGTON -- Congress overwhelmingly passed emergency legislation Thursday to bolster security at the Capitol, repay debts from the violent Jan. 6 insurrection and increase the number of visas for allies who worked alongside Americans in the Afghanistan war.

The Senate approved the legislation 98-0, and the House passed it immediately afterward 416-11. The $2.1 billion bill now goes to President Joe Biden for his signature.

The votes came on the heels of Wednesday's Senate vote to take up a $1 trillion bipartisan infrastructure bill that would make far-reaching investments in the nation's public works system, as Republicans joined Democrats in clearing the way for action on a crucial piece of Biden's agenda.

Wednesday's 67-32 vote, which included 17 Republicans in favor, came just hours after centrist senators in both parties and the White House reached a long-sought compromise on the bill, which would provide about $550 billion in new federal money for roads, bridges, rail, transit, water and other physical infrastructure programs.

[Video not showing up above? Click here to view » https://www.youtube.com/watch?v=6xW905ifkJ8]

On Thursday, senators struck a bipartisan agreement on the Capitol security legislation two months after the House passed a bill that would have provided about twice as much. But House leaders said they would back the Senate version, arguing that the money is urgently needed for the Capitol Police and for the translators and others who worked closely with the U.S. troops in Afghanistan.

The bill loosens some requirements for visas, which lawmakers say are especially pressing as the U.S. withdrawal enters its final weeks and Afghan allies face possible retaliation from the Taliban.

The money for the Capitol -- including for police salaries, the National Guard, and to better secure windows and doors around the building -- comes more than six months after the insurrection by supporters of former President Donald Trump.

The broad support in both chambers is a rare note of agreement between the two parties in response to the attack, as many Republicans still loyal to Trump have avoided the subject. The former president's loyalists brutally beat police, and hundreds of them broke into the building and interrupted the certification of Biden's election win.

Senate Majority Leader Charles Schumer said passing the legislation is living up to Congress' responsibility to keep the Capitol safe "and to make sure that the people who risk their lives for us and protect us get the help they need."

The bill's passage comes after four police officers who fought off the rioters testified in an emotional House hearing Tuesday and detailed the "medieval" battle in which they were verbally assaulted and beaten. House Speaker Nancy Pelosi suggested Wednesday that the hearing had perhaps "jarred the Senate to move in a bipartisan way to pass this legislation."

[Video not showing up above? Click here to view » https://www.youtube.com/watch?v=JssEd1MJgu4]

Pelosi had said the legislation was months overdue.

The legislation will boost personal protection for lawmakers who have seen increasing death threats since the insurrection, install new security cameras around the complex and replace riot equipment that the police lost in the fighting.

It will fund new intelligence gathering, and boost wellness and trauma support for the Capitol Police, as many officers are still suffering in the wake of the attack. And it will reimburse the National Guard $521 million for the thousands of troops who protected the Capitol for more than four months after the siege.

The White House issued a statement of support, saying the administration backs the Capitol security improvements and "remains committed to supporting the Afghan people, including by fulfilling our commitment to Afghan nationals who worked for or on behalf of the U.S. Government."

The bill will allow 8,000 additional visas and provide $500 million for the Afghan allies' emergency transportation, housing and other essential services.

Alabama Sen. Richard Shelby, the top Republican on the appropriations panel, who negotiated the legislation with the Democrats, said it would be "shameful" not to help the Afghan allies and that they could be killed by the Taliban as the U.S. withdraws.

Senate Republican leader Mitch McConnell of Kentucky said senators "intend to keep our nation's promises to brave Afghans who have taken great risks to help America and our partners fight the terrorists."

For Biden and the senators laboring over the $1 trillion infrastructure package, there remains the question of Republican votes.

Seventeen GOP senators joined all Democrats on Wednesday in voting to start the debate, launching what will be a dayslong process to consider the bill. But whether the number of Republican senators willing to pass a key part of Biden's agenda grows or shrinks in the days ahead will determine if the president's signature issue can make it across the finish line.

"That's pretty darn good for a start," Portman said after Wednesday's outcome. "We can build on that as members begin to realize the impact of these projects on their states and the people they represent."

He called the legislation "an incredibly important project for the American people."

"I am amazed that there are some who oppose this, just because they think that if you ever get anything done somehow it's a sign of weakness," said Sen. Bill Cassidy, R-La.

For Republican senators still weighing their options, however, there are plenty of reasons to stick with no.

The bipartisan Biden plan is big, with $550 billion in new spending beyond the typical highway and public works accounts. It's being financed with funding sources that may not pass muster with deficit hawks, including repurposing untapped covid-19 relief aid and relying on projected economic growth.

They call that plan a "reckless spending spree," but can do little to stop it under budget rules that won't require the 60-vote threshold needed to advance the bipartisan package over a filibuster in the evenly split 50-50 Senate.

Sen. James Lankford, R-Okla., who voted against launching debate, seems inclined to oppose the bipartisan package, even as he acknowledged the potential popularity of new roads, bridges, broadband internet and other infrastructure spending.

"That's always the challenge," Lankford said Thursday. "People always say, 'We want more.' But when you say, 'How do we pay for it?', they'll often say, 'Yeah, we need to make sure it's paid for as well.'"

Yet some Republicans say it's time to say yes.

After voting against Biden's $1.9 trillion covid-19 relief aid bill earlier this year and preparing to vote against the next big infrastructure package on deck, some Republicans worry about ending the first year of his presidency almost empty-handed.

"It feels like you're against everything," said Sen. Kevin Cramer, R-N.D., who was among the 17 Republicans voting to start work on the bill. "And I think that's how it looks."

Infrastructure is a topic that has typically generated bipartisan support, and senators are hearing from mayors and other local officials about the need for federal investments in the big-ticket public works items that cities, counties and states cannot typically afford on their own.

While McConnell has been open about his plan to stay "100% focused" on stopping Biden's agenda, he also knows other GOP senators wouldn't mind having something to show voters back home.

The political calculation among the Republicans played out in a closed-door lunch meeting this week, when one side argued that a yes vote would only help Biden and Democrats push their big spending plans forward.

Their arguments echoed a statement from Donald Trump, the former president, who called Republicans derisive nicknames for working with Democrats. Trump encouraged Republicans to wait and try to pass their own bill if they regain the Senate majority in next fall's midterm elections.

Cramer said he stood up in the meeting and told his colleagues that if they kept at it, neither Democrats nor Republicans would ever end up supporting the other side, and nothing would ever get done.

"There can be winners and winners," he said. "Not every transaction in this place requires there to be a loser for there to be a winner."

One Republican strategist who spoke on condition of anonymity to discuss the private thinking said more senators are expected to get to yes.

The strategist said GOP senators are weighing the idea that a yes vote could be seen as a political win, showing that they worked to support the bipartisan infrastructure plan. They could then shift attention to Democrats, who face their own internal divisions as they try to carry Biden's proposals to final passage.

McConnell signaled the GOP's strategy at work as he joined those voting to start the debate but quickly blasted Democrats for their big spending plans.

"Our country would benefit a whole lot from some targeted investment," McConnell said Thursday. "The kind of focused compromise that our colleagues have been hashing out could not contrast more sharply with the multitrillion-dollar reckless taxing-and-spending spree that Democrats hope to ram through on a party-line vote later this year."

"I think it's an important statement for Republicans to come together with us, but we are clear that we are going to make these investments in our economy, because those are investments in the American people," said Rep. Katherine Clark, D-Mass., the assistant speaker. "And we hope the Republicans will join us, but that will be our outcome, whether they decide to be on the side of the American people or not."

But even Democrats were not unanimous at this point.

In negotiating the deal, Biden and Democratic leaders were forced to agree to concessions, accepting less new federal money for public transit and clean-energy projects than they wanted, including for electric vehicle charging stations, and abandoning their push for additional funding for tax enforcement by the IRS.

The changes -- and the omission of some of their highest priorities -- rankled progressives in both chambers, with some threatening to oppose the bill unless it was modified.

"From what we have heard ... this bill is going to be status quo, 1950s policy with a little tiny add-on," said Rep. Peter DeFazio, D-Ore., chairman of the Transportation and Infrastructure Committee.

Sen. Kyrsten Sinema of Arizona, the lead Democratic negotiator of the infrastructure deal and a key moderate vote, issued a statement Wednesday saying she did not support a plan so costly, though she would not seek to block it. Those comments prompted multiple liberals in the House to threaten to reject the agreement she helped negotiate, underscoring its fragility.

"Good luck tanking your own party's investment on child care, climate action, and infrastructure while presuming you'll survive a 3 vote House margin," Rep. Alexandria Ocasio-Cortez, D-N.Y., wrote in a tweet. "Especially after choosing to exclude members of color from negotiations and calling that a 'bipartisan accomplishment.'"

Information for this article was contributed by Mary Clare Jalonick, Ellen Knickmeyer, Kevin Freking and Lisa Mascaro of The Associated Press; and by Emily Cochrane and Jim Tankersley of The New York Times.