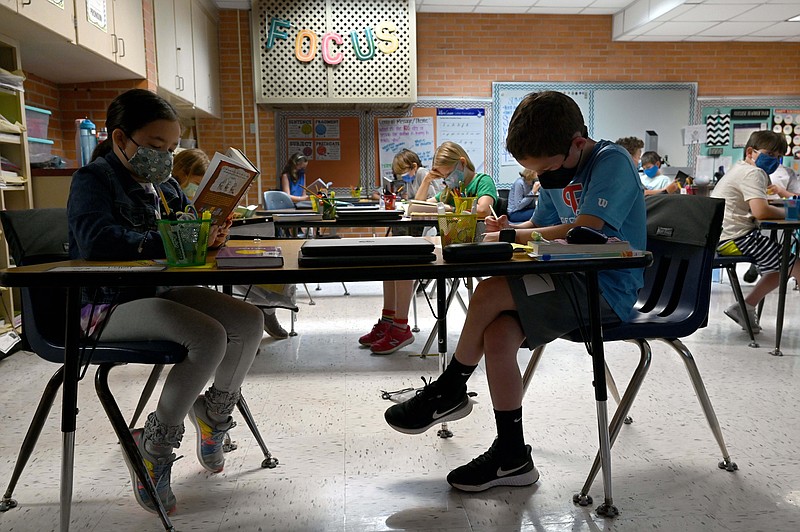 Dewey, the very real rabbit that spends his weekdays in Little Rock's Jefferson Elementary media center, doesn't seem to pay much attention to the highs and lows of school operations.

He was not fazed by Jefferson's receipt in 2020 of the prestigious National Blue Ribbon School honor for exemplary high-performing student achievement.

And he was unperturbed by a pandemic that not only put the kibosh on a lot of the Blue Ribbon celebrations but that also kept many of his small human pals at home -- tapping keys on Chromebook laptops rather than reading to him while sitting on the library floor.

It was the adults at Jefferson who did all the hopping during the school year that concluded last week.

The adults are the ones who put aside some of the strategies and flair that resulted in the school's National Blue Ribbon award so as to turn their attention to defending against covid-19. Their focus was on physical distancing, new technology, online instruction and ever-changing schedules.

"They've really done a great job," Principal Sandra Register said about the yearlong efforts of staff members, students and parents, "but it has been some kind of difficult."

Scary, exhausting, curve balls, turning on a dime, resilience and problem-solving are words and phrases that the Jefferson faculty used recently in describing a year that might otherwise have been about trumpeting the Blue Ribbon status.

Register, a 43-year educator with 16 years of experience as a principal in Little Rock and El Dorado, learned in spring 2020 that Jefferson had been nominated for the U.S. Department of Education's National Blue Ribbon recognition program.

She and Sarah Relano, instructional specialist and testing coordinator, had until April 6, 2020, to all but secretly prepare and submit the required 19-page application, detailing the many programs and special initiatives at the school that start with deep, regular dives into testing data to identify and address individual students' needs.

In recent years, Register has made a practice of meeting one-on-one quarterly with each of the third-, fourth- and fifth-graders to graph the children's results on district and state tests and to set goals for the next test. She looks at the time it took for the children to take the online tests and how much, or little, scratch paper they used.

"They ask me how did I know," the principal said. "The second time they will take more time. I know the meetings make an impression because they go home and tell their parents."

Register and her staff don't know who nominated the school for the National Blue Ribbon Award -- one of five awarded in Arkansas last year -- but they point to academic achievement in 2019 as a reason. The school ranked fifth in the state for achievement that year, up from 34th two years before -- in part because of gains made by subgroups of students.

Little Rock School District Superintendent Mike Poore said Jefferson, which has an "A" grade from the state, has always been a good school but that "it has become a great school," adding that Register is task-oriented in terms of ensuring that the staff is teaching to state education standards.

"She has a way of empowering her educators but at the same time making sure they are accountable to the approach she believes works," Poore said.

The Blue Ribbon award application was sent to the U.S. Department of Education during the early days of the pandemic, when schools statewide were closed to on-site instruction and efforts were being made to provide lessons to students at home.

In September, when confirmation of the award arrived -- along with the news that there would be no traditional trip to Washington, D.C. -- Jefferson had just reopened for the new school year but with 92 pupils -- 24% of the 376 enrolled -- opting for remote, online learning.

On campus, there were 700 red stickers on hallway floors to tell the pupils in the school, at 2600 N. McKinley St., where to sit and stand to ensure safe distancing.

The water fountains in the 1949 orange-brick building were covered. Pupils arrived with water bottles from home. Their school supplies were in baskets attached to their tables and were no longer stored altogether in classroom carts.

School cafeteria rules dictated one child per every three seats. As remote-learning students returned to the school, tables had to be added.

Most of the myriad safety precautions remained in effect throughout the 2020-21 school year, a recent end-of-year tour of the school showed.

"I have my air purifier on, and my windows are always open," teacher Catherine Durham told visitors to her kindergarten classroom.

The purifiers -- provided by the school's parent-teacher association -- and portable microphone systems, provided by the district to compensate for the voice-muffling masks, are the latest in classroom furnishings.

Classroom to classroom, the mask-wearing pupils were spaced apart from one another in a variety of ways, such as sitting crossed-legged on the floor or with two sitting at either end of long, rectangular tables. In one class, student pairs faced off -- at a distance -- on the carpet to play a math card game.

"The children have the same partners," Register said. "So if one gets covid-19, we know who the partner is and who to quarantine. But we have been fortunate."

"We have really had to spread out," teacher Jane Sartor added. "I used to have four or five kids at a table, and I'd have a couch for a comfy little reading nook with pillows.

"They can still play together," Sartor said of her pupils. "We use hand sanitizer. We wipe everything down."

Jefferson's music and art teachers spent most of the school year traveling from classroom to classroom instead of having children cycle through the art and music rooms.

There was no singing.

"We did a lot of music appreciation," Beth McAlpine, a Jefferson parent as well as the school's music teacher, said.

"We listened to a lot of different genres and composers. We did a lot of music theory and played a lot of games where they didn't touch each other," she said, adding that the Little Rock district helped by providing purchased programs in music that could be used with both on-site and remote pupils.

Only at the end of the year were pupils able to visit the music room to play instruments -- xylophones and mallets, for example -- thanks to a supply so large that students didn't have to share over the course of the day.

For the remote-learning students, Jefferson teachers as often as once a week handed out math games, science experiment equipment and other supplies to drive-by parents. School librarian Lori Benson -- caregiver to Dewey the rabbit -- passed out library books selected by families earlier in an exchange of emails.

But mastering the technology necessary to deliver lessons and collect work from both on-site and remote learners -- as well as keeping students engaged and in a routine -- were the key challenges of the pandemic year, Jefferson faculty members said.

Relano told of hastily learning to operate the Schoology learning platform on which all student assignments would be placed, and then immediately teaching it to her Jefferson colleagues. Other online programs were offered throughout the year.

"They were all great things, but there was so much to learn in such a short amount of time," she said.

Relano's role through much of the year involved helping students, teachers, parents and grandparents to fix and use their devices and internet. That was in addition to her testing coordinator duties that included monitoring by Zoom the students taking district-required tests at home, and occasionally having to text parents to say that their children had fallen asleep.

The two teachers described going at the fast but jerky pace of Keystone Kops between desktop and laptop computers and electronic whiteboards to reach and simultaneously teach their on-site and remote pupils.

Using Zoom, clicking on subject-area folders in Schoology, and uploading documents were among the skills that teachers -- and their students -- had to learn at a fast pace this school year. Still other skills acquired almost on the fly included video recording of lessons for later viewing, sharing images from one computer to other devices, and providing text boxes for online writing or drawing by students and for teacher grading.

"It was hard," Terry said of the technology and the dual instruction. "I apologized to the six students I had in class because I couldn't spend much time with them because I was trying to teach 14 others at home, and their parents."

"We had to teach all the technology, how to get on Zoom and how to do Schoology," Pierce said. "Our first couple of months, we felt like we barely taught because we spent most of our time on how to do it."

Register said the Little Rock School District's midyear decision to institute "virtual Fridays" was a "sanity saver" for the staff. On Fridays, most students districtwide stayed at home to do their assignments and otherwise catch up on work or confer individually with teachers. No new material was introduced on Fridays.

Rachel Knox, the parent of children at Jefferson, said the virtual Fridays were challenging for her family but that the school year "was a great year," and her children "were so happy to be back in the classroom learning and able to see their friends."

A particular highlight, Knox said, was fifth grade, where her daughter's teachers were able to make the last year of elementary school special.

The 38-year-old National Blue Ribbon award program honors public and private schools for either their overall academic achievement or for the progress a school has made in closing achievement gaps among subgroups of students.