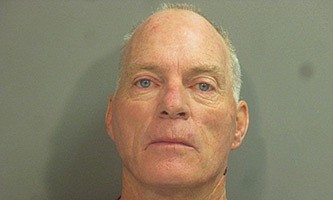 A fundraiser has been started to help a Gravette man arrested in connection with the Jan. 6 breach of the U.S. Capitol.

It's called the Richard "Bigo" Barnett Legal Defense Fund, according to the fundraiser's website.

For contributions of $100 or more, Barnett will, "as a token of his appreciation," send a personally inscribed, autographed picture of himself sitting at a desk in the office of House Speaker Nancy Pelosi, according to the website.

One of the most well-known photographs from the Capitol incursion shows Barnett with his foot propped on a desk in Pelosi's office suite.

"Richard Barnett's picture at Speaker Pelosi's desk has become the face of the new anti-federalist movement," according to the fundraiser website.

"We will not go gently into that good night."

Also, "as a token of his appreciation for contributions of $25 or more," Barnett will email the donor a copy of the court filing that resulted in his release from jail, according to the website.

"We are raising money to ensure a robust defense against the biggest prosecution in the Department of Justice's storied history because the poor and middle class should not lose on the legal battlefield for lack of money," said Barnett's attorney, Joseph D. McBride, Esq., of New York City.

"We will not allow the federal government to bully Richard simply [because] it has an unlimited budget. This is the story of David v. Goliath, and we intend on defeating the giant."

Robert Steinbuch, a law professor at the University of Arkansas, Little Rock, said there is probably nothing illegal about Barnett's fundraiser.

"If being a jackass were a crime, there would be a lot more people in jail," Steinbuch said.

"There are some prohibitions in some jurisdictions on profiting from a crime during incarceration. Otherwise, it's generally free enterprise. Remember, Barnett has not been convicted of a crime."

A grand jury indicted Barnett on seven charges in connection with the riot, including 18 U.S.C. 1752(a)(1) and (b)(1) (A), entering and remaining in a restricted building or grounds with a deadly or dangerous weapon, which carries a maximum sentence of 10 years in prison.

The weapon was a ZAP Hike N' Strike 950,000 Volt Stun Gun Walking Stick that Barnett purchased at Bass Pro Shops in Rogers on Dec. 31, according to court filings.

Barnett's attorneys argue it wasn't a dangerous weapon because it had no batteries in it during the Capitol breach. Based on court filings, investigators have yet to recover the stun gun or the cellphone Barnett had with him at the Capitol.

Barnett also took an envelope from Pelosi's office and left a scrawled note for her.

Barnett's attorneys argued that the note actually read, "Nancy, Bigo was here, biatd." The last word was meant to be "biatch," but the c and the h ran together, they said in a court filing in which they argued that "biatch" is slang and a less offensive word.

Barnett was in jail -- in Fayetteville and then in Washington, D.C. -- from Jan. 8 until U.S. District Judge Christopher R. Cooper of the District of Columbia ordered his release April 27.

Barnett has pleaded innocent. His trial date hasn't been set.

According to the "trial" section on the fundraiser's website, "On Jan. 4, 2021, Richard Barnett set out for Washington, D.C., to make his case for independence from tyranny because like many other Americans he believed the result of the November 2020 presidential election was an intolerable one. On Jan. 6, Richard marched over to the Capitol building after President Trump's speech ended, not because President Trump asked him to, but because Richard wanted to exercise his First Amendment right to petition his government for redress of grievance and have his voice heard."

Once there, Barnett was "swept inside the open doors" by the crowd, according to the website.

"He admits that he ended up in Speaker Pelosi's office, put his feet up on one of the desks, smiled for the reporter's camera, and left her a non-threatening note that the prosecutors purposely misquoted in court papers," according to the website.

"Richard believes that his actions were not criminal, certainly not warranting a 10-year sentence the government is seeking, but rather a constitutionally protected form of political protest. This is evidenced by the fact that he carried the American flag across the threshold of the Speaker's office (which the government has yet to return to him), did not assault or injure any officer, nor did he destroy any property while inside the Capitol. Those few who did should be held accountable."

The Jan. 6 protesters are being treated unfairly, based on the way protesters at other events have been treated, the website argues.

"Richard is also asking for the support of persons who object to the narrative that the 75 million people who voted for President Trump are uneducated, non-sophisticated, ignorant, voiceless, penniless and afraid," according to the website.

"He's asking for the support of those [who] agree with the absolute fact that the vast majority of the people who went to the Capitol on January 6th did so peacefully and did not participate in an insurrection. In fact, no one was ever charged with insurrection!"

Besides legal assistance, Barnett also needs financial help with family expenses and bills, according to the website.

Because of his arrest, Barnett lost his job as "a top salesman at a company where he worked for over 15 years," it read.

Under a section of the website titled "fight," the website read: "Today, Trump supporters are typecast as domestic extremists by a media propaganda machine that openly encourages the illegal pretrial detention of United States citizens by the federal government. D.C. Central Detention Facility has become Guantanamo Bay for scores of January-sixers whose human rights are violated on a daily basis with the media's blessing."

Regarding "cancel-culture activists," a passage on the website read: "The Spanish Inquisition was wrong, and so is yours. Stop putting people who disagree with you on enemy lists like how the Nazis and Soviets did. Communism always fails and socialism equals slavery. Prepare to lose the greater fight, because the Holy Bible states that the people of God will win. America is the greatest country in the history of the world."

Two other Arkansans have been charged in connection with the Jan. 6 breach of the U.S. Capitol: Peter Francis Stager of Conway and Jon Mott of Yellville. Both have pleaded innocent. Neither has gone to trial.

Mott is free pending trial while Stager, who is charged with assaulting a police officer, remains in jail in the District of Columbia.