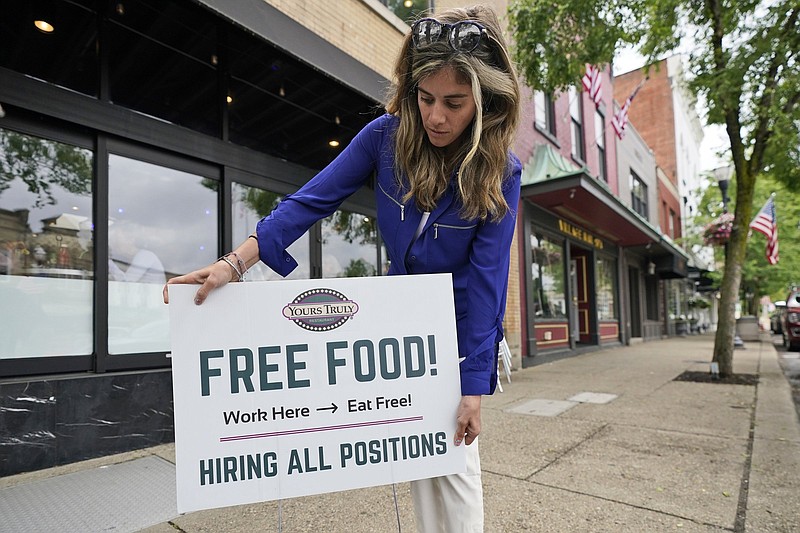 WASHINGTON -- The number of Americans seeking unemployment benefits fell last week for a fifth-straight week to a new pandemic low, the latest evidence that the U.S. job market is regaining its health as the economy further reopens.

Other data Thursday suggest the labor market continues to gain steam. U.S. businesses added the most private payroll jobs in nearly a year in May, according to ADP Research Institute.

The Labor Department reported Thursday that jobless claims dropped to 385,000, down 20,000 from the week before. The number of weekly applications for unemployment aid, which generally reflects the pace of layoffs, has fallen steadily all year, though it remains high by historical standards.

The decline in applications reflects a swift rebound in economic growth and the job market's steady recovery from the coronavirus recession. More Americans are venturing out to shop, travel, dine out and congregate at entertainment venues. All that renewed spending has led companies to seek new workers.

Employers have added 1.8 million jobs this year -- an average of more than 450,000 a month -- and the government's May jobs report today is expected to show that they added an additional 656,000 last month, according to a survey of economists by the data firm FactSet. The economy remains down 8.2 million jobs from its level in February 2020, just before the virus tore through the economy.

AnnElizabeth Konkel, economist at the Indeed Hiring Lab, noted that the number of people who are collecting traditional state unemployment benefits rose by 169,000 in the week of May 22 to nearly 3.8 million.

In the week that ended May 15, a total of 15.4 million people were receiving some form of jobless aid, including special federal programs to aid the unemployed during the pandemic. That was down from 15.8 million the previous week. That figure has steadily declined from about 20 million in December.

"Reviving a labor market after a deadly pandemic is complicated," Konkel said. "Not all indicators move at the same speed or take the same recovery path. Hopefully, the covid-19 cases continue to decline as the number of fully vaccinated individuals rises. Fully returning to pre-covid normal is essential to a full labor market recovery."

In the meantime, U.S. employers are posting a record number of available jobs. And many of them have complained that they can't find enough workers to meet rising customer demand.

Job growth slowed sharply in April compared with March, a pullback that was widely attributed to a labor shortage in some industries, especially at restaurants and other employers in the hospitality sector.

At least 25 states have responded by announcing plans to cut off some emergency federal aid to the unemployed -- including a $300-a-week federal benefit -- as early as next week. Critics argue that the extra federal unemployment aid, on top of regular state jobless benefits, discourages some of the jobless from seeking work.

U.S. companies added 978,000 private payroll jobs in May, the most in nearly a year, according to Thursday's report by ADP.

Employment rose by 128,000 in goods-producing industries and 850,000 among service-providers. The largest payroll gain was in leisure and hospitality, which posted a 440,000 jump from a month earlier, also the largest advance in 11 months.

Hiring was consistent across all business sizes, including a 333,000 gain at small businesses. ADP's payroll data represents firms employing almost 26 million workers in the U.S.

The report's overall increase exceeded forecasts, with the median projection in a Bloomberg survey of economists calling for a May increase of 650,000.

Information for this article was contributed by Paul Wiseman of The Associated Press and by Olivia Rockeman, Payne Lubbers and Christ Middleton of Bloomberg News (TNS).