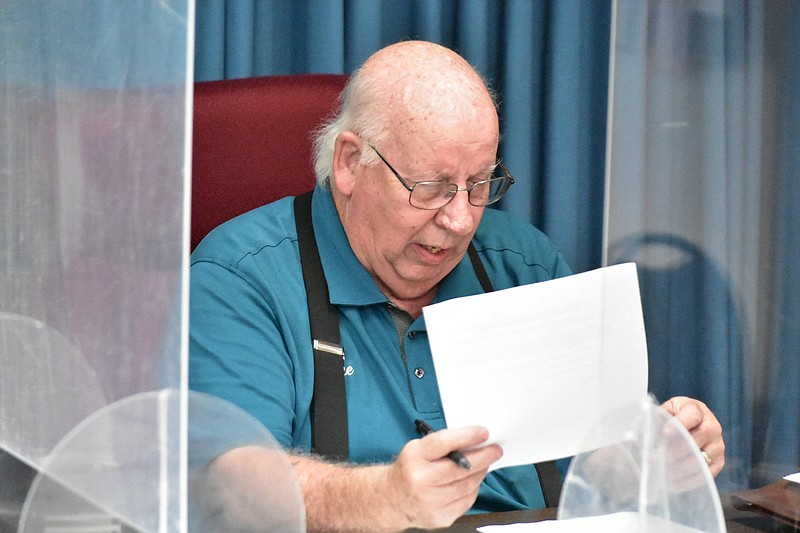 In a two-paragraph email Thursday, Stu Soffer announced he would immediately step down as Jefferson County Election Commission secretary.

Soffer said he has served in the position for almost two decades and that he intends to remain on the commission.

"I fully intend to continue serving an election commissioner; it's just I can no longer satisfactorily perform secretary duties requiring vision and hearing and am obliged to step aside. Hopefully UAMS will eventually fix the vision problem."

Soffer did not attend Thursday's regular meeting, but took a shot at election coordinator George Stepps in the latter part of his email, accusing him of four statutory violations – none of which he listed – in the November 2020 general election.

"My issues also make covering for the election coordinator's shortfalls difficult," Soffer said. "This past election we incurred four avoidable statutory violations because of ineptness, and no one seems to have cared. There is no reason he cannot perform the duties being paid to perform so the election commission no longer needs a secretary."

In responding to Soffer's allegations, Stepps said he prepared a notice to be printed in The Pine Bluff Commercial prior to the May 18 White Hall School District millage renewal election based on information from a school board election in 2018, since he had not prepared a notice before. Stepps said he sent Soffer a copy and added that Soffer responded, "You're on the right track. It looks good."

Stepps then said Soffer instructed him to include DeWitt School District election information. Once Stepps sent an updated draft, he alleged that Soffer said: "I'm not going to be doing your job, and I'm not going to do free work for the commission. Nobody else is doing it, so I'm not going to do it because I'm not getting paid. Do what you want to do with it and do the best you can with it."

Stepps said when he sent the notice, Soffer responded by telling him he didn't have the authority to send anything to the newspaper. Stepps said one of the violations was that the notice was not run three times in the newspaper prior to the election; a receipt from The Commercial provided by a commission official states the notice ran May 11 and 13.

"I carried it to the newspaper," Stepps said. "He contacted the newspaper and said, 'Do not run it.' He did. I didn't do no violation."

"We haven't had an election coordinator in years that's done anything," Adam said. "We've always used our own election clerks, and there's no reason we can't do exactly what we've been doing, so that way it's a lot easier and it all works out to saving the county money, which is the No. 1 criterion. We have to pay the other people, anyhow."

Robinson, who did not attend the meeting, accused Adam and Soffer in February of duplicating services Stepps is tasked to do and expecting to be paid for it. The annual salary for an election coordinator, Adam said, is $30,000, and Adam added that 90% of that salary can be saved because clerks have to be used for elections.

"All of our other personnel are hourly, and they work per job," Adam said. "This is an off-election year, so we use very little time. In addition to that, actually, we've had coordinators, but the election commission has vowed to – voted not to – use them most times, because people who are hired as coordinators typically are not trained to be a coordinator and typically report to the county judge, even though we have a new law saying they'll report to us only."

Senate Bill 557, which was passed during the recent state legislative session, gives county election boards the power to supervise all election officials and states that county employees detailed as election officials must comply with the county board's directives in election matters, according to the Arkansas Democrat-Gazette. The bill is expected to become law in late July.

Adam said no one offers training for election coordinators, contradicting a point Robinson made in February that Stepps was trained to serve as coordinator.

Stepps, who was hired as coordinator last June, listened to Adam's complaints after the meeting and responded by saying the commission doesn't have employees to do the job.

"I don't want to accuse them of being biased," Stepps said. "From the onset, and the real reason is that the judge hired me, they were looking for an employee. The election commission doesn't have employees. Therefore, I don't have to report to them. I don't have no problem reporting to them, but they want to treat me as an employee. With that recommendation – you don't have any employees – what is that recommendation going to the judge about? It goes nowhere. I'm on the county judge's payroll, and I work for the judge. If he so sees fit that I'm one of the ones he needs to let go, it's not a problem for me. But for him – and [Adam says], 'We didn't train him; he hadn't had any training' -- and I asked them for it ... you're making a recommendation about cutting your staff and you don't have one."

Hardin said she would talk to Robinson about the position, after Adam commented he had "a very difficult time to talk to him about anything."

"I know very little about it, and that which I do know, [Stepps] is doing a very good job," Hardin said. "Again, I didn't hire him. This is just a recommendation from Mr. Adam. I do not agree with it. However, I still would still like to talk with Judge Robinson. Before I answer any question, I would like to know what he thinks."

Also during the meeting, Adam and Hardin voted to certify the results of the May 18 White Hall millage renewal. Voters approved the millage 6-5 in an election that included one early and 10 absentee votes.